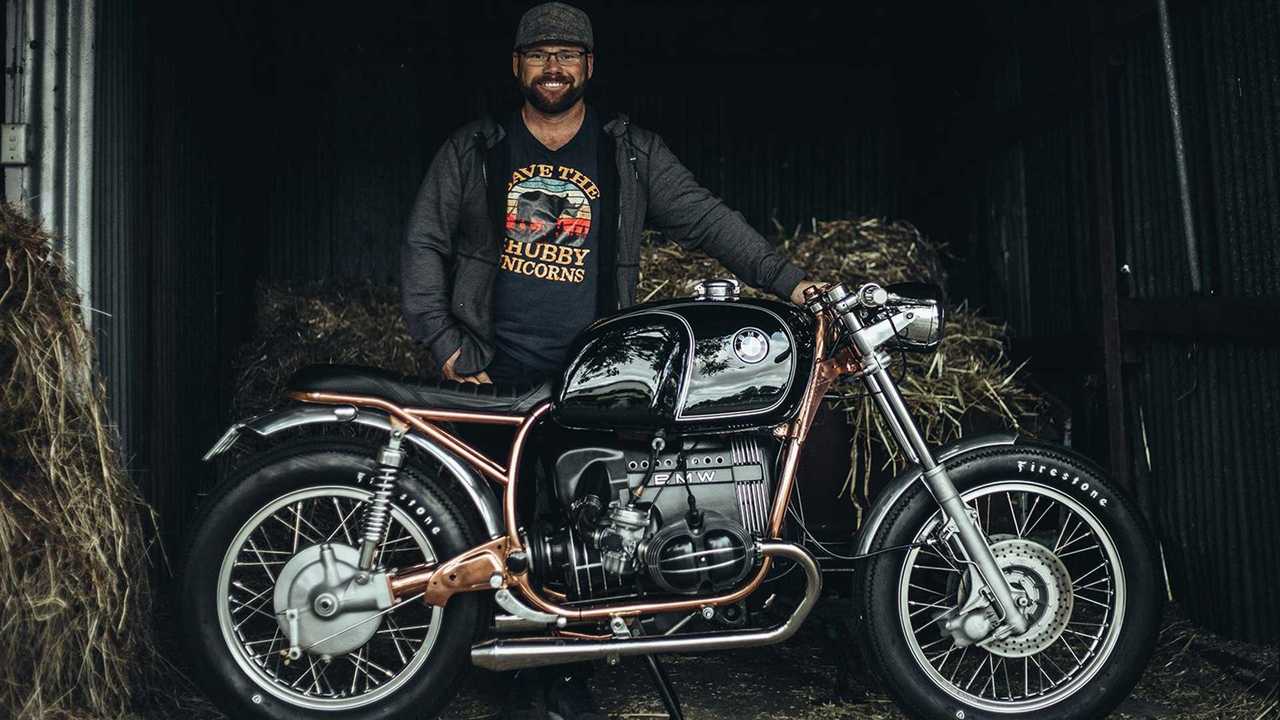 I kind of want to lick it.

Standard-style motorcycles are very popular starting points for custom builds. They’re not too sporty, not too laid back, and everything is sort of “in the middle.” Old BMW airhead motorcycles have the added advantage of having a beautiful, identifiable, and extremely robust engine at the heart of it all. Australian motorcycle enthusiast Jason Ralls obviously had the same thought when he saw the results of a friend’s customization. He found himself a barn-fresh 1979 BMW R80 to begin his own, first-ever, build. The results are breathtaking.

Dubbed “Kupfernickel,”—an obvious play on that dark German rye bread—is a serious head-turner. “Kupfer” is German for “copper,” and that is what Ralls and, eventually, Billy Kuyken and his team at Rogue Motorcycles, dipped the frame in. Copper-plating an entire motorcycle frame is apparently a challenge, and they had a hard time finding a shop that would dip the frame for them. The end result says their effort was well worth it, though, thanks to Australian shop Custom Modifications.

We often see painted frames and chrome frames, sometimes powder-coated frames, but a copper-plated frame is a new one on me. While usually a custom build, especially a minimalist one like this, showcases the engine like a jewel in a setting, our boy Jason has instead put that setting on exhibit. The bones of the bike are polished to an incredible copper shine. Did I mention this was his first time designing a custom motorcycle? He had experience with building cars, and a boat, but this is his first custom bike. It’s like nothing I’ve ever seen.

Along with the copper-dipped frame, the tank was repainted and pinstriped. Perth-based Rogue Motorcycles created a new seat pan and had it upholstered, created custom brackets for the fenders, and took on the majority of the modifications under Ralls’ instruction. The wheels are original but refurbished, as are the forks. The exhaust is entirely aftermarket, but you’d be forgiven for looking at it and thinking it’s stock.

Luckily for Ralls, the aftermarket for BMW airheads is, even today, quite robust. The headlight and its brackets, the triple-clamps, and clip-ons are all aftermarket but the aesthetic of the bike is impressively consistent. Its fork caps, steering head nut, and clutch and brake hardware at the handlebars are all touched with copper to let the design continue through the rider’s view.

Well done, Jason. Keep a pot of copper polish in the eventual saddlebag, though. Head over to PipeBurn for a lot more photos of this incredible build.