Sometimes the Busa isn't the baddest.

It takes a special combination of both car and driver to beat a prepped Hayabusa with an experienced rider on a drag strip—but it does happen on occasion. Sure, it’s not by much, but every millisecond counts off that line. 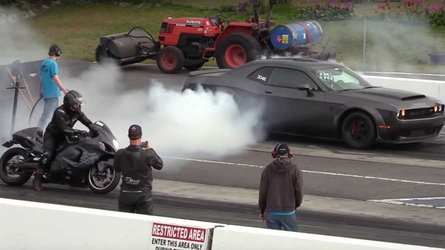 Watch A Hayabusa Take On Challenger Demon In The Quarter Mile

This 1966 small-block Mustang looks mean and sounds amazing as it pulls up to the line at Mission Raceway Park in beautiful British Columbia, Canada. According to the announcers, this their current top car and driver against their current top bike. You can hear the excitement in the commentators’ voices as they talk—even though they’ve probably seen every possible combination approach the line, this particular grudge match is intriguing.

Surely, the stealthy, black Suzuki Hayabusa is going to win—isn’t it? It looks very, very close as the two tear down the quarter-mile drag strip. The viewing angle on this video makes it difficult to tell who’s in front most of the time. Then, finally, the Mustang wins by over a tenth of a second—setting a blistering time of 8.94 seconds to the Busa’s 9.07 seconds. You read that right: It's an 8-second Mustang.

Shortly after the video went up on YouTube, commenter Gearhead Custom Garage wrote, “What people should know is the guy on the Busa is 71 and has been mid 8's on that bike... I'm forty something and I hope i can do half as well as him when i'm that age.”

Everyone is nicer in Canada—even YouTube commenters, because the original poster responded “Yes, and he is a very nice guy, too.” Then commenter Justin Gibson—who is apparently the Mustang racer’s son—jumped in on that thread with “Huge respect for Lee still riding that thing like he stole it.”

Further down, Gibson dished the details on his dad's Mustang, so everyone knows exactly what that Busa was up against:

It’s a good reminder that a) just because you’re fastest one day doesn’t mean you’re fastest every day, and b) you can be the fastest any day and still also be excellent to each other.