When on the road, the reality of an encounter with wildlife always has to be at the back of our mind, especially if we’re on motorcycles. Birds and deer don’t have quite the same impact when there’s no sheet metal to protect us. On the track, however, even though is isn’t a closed-off environment, these encounters tend to be a little more surprising. These two riders probably didn’t consider birds to be a major concern while they were ripping it around the track at Phillip Island, Australia, until it hit them. The bigger the bird, the harder they fall I think they say. 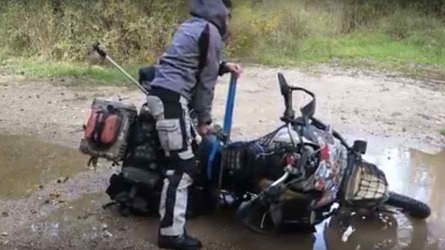 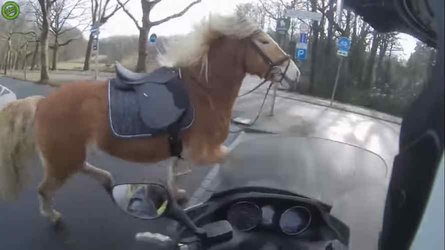 You’ve heard the saying “two birds, one stone”? Well this time, the bird came back with a revenge and turned the table around—this is a case of one bird, two riders. The video was recorded by one of the two “victims” who had seemingly mounted the camera on his handlebar.

We can see the first-person rider catch up to the guy in front of him as they both tackle a curve. As they straighten their bikes back up, emerging from the bend, the rider up front suddenly ends up covered in feathers, going roughly 110 mph. He swerves and hits his mate with the camera, sending him tumbling in the gravel. What just happened exactly? Things unfold so quickly that we barely see what causes the incident.

Thankfully, the original scene is followed by a slowed down redo of the accident which allows us to notice the two massive geese-like birds fly across the track at eye level as the two riders complete their manoeuvre. While the first bird avoids a collision, the second one hits the leading rider on his side, causing him to change course and hit the other guy in the process. The most impressive sight of the entire video is watching the leader rides on with the enormous bird stuck to him.

Looks like the motorists weren’t the only ones enjoying the track on that day. The story doesn’t tell whether anybody got hurt, but we’ll suppose the rider that fell down was fine as he recorded the crime scene after the incident. As for the bird, we’d rather think he shook hands with the guy, apologized, and flew away.