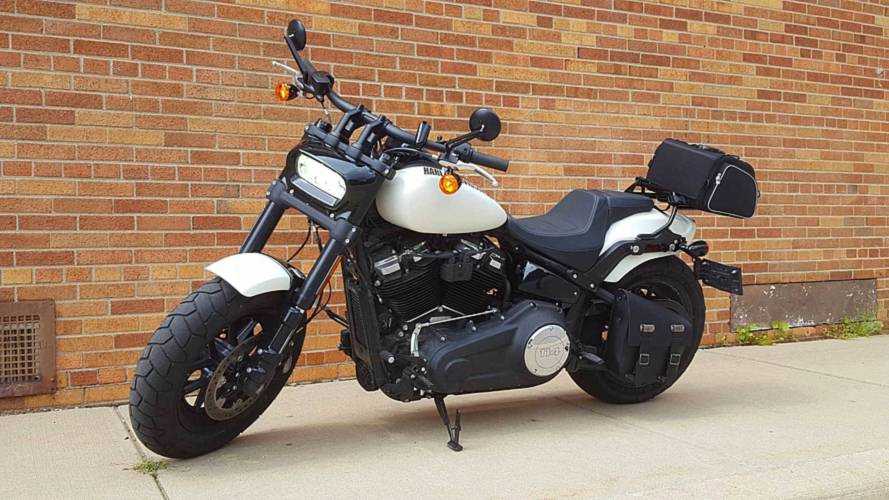 Wherein I make FleetBob into the short-range day tripper I wanted all along.

Remember a couple weeks ago when I wrote that story about all the parts I wanted to slap on to FleetBob—our Harley-Davidson Fat Bob 114 review bike—to make it more practical for my daily use? Of course you do. Well, the strangest thing happened. Not long after I wrote that, the parts fairy showed up and dumped box after box of Harley parts and accessories in my garage! Weird, right? So, since I had all these parts, I figured I'd slap them all on the bike and see how they looked.

What's in all these packages?

Oh, and before we go much farther I have a bit of a caveat. You'll notice that FleetBob here is kinda dirty. That's because I firmly believe that if you got time to clean you got time to ride. My typical detailing regimen is leaving a bike in the rain to get the worst of the dirt off. FleetBob currently has about 2,500 miles of honest dirt and dust on it and it's gonna stay that way 'til I return it. It'll be returned spic and span, but until then, I got better things to do than wash bikes so don't @ me that the bike is dirty. I know. I like it that way.

Anyway, on with the show.

Four little knobs and their bolts. An easy job.

I started with what I thought was going to be the most difficult part, the quick release hardware. I mean, it's not that hard a job, but it does entail some wrenching and I figured that it'd be the extent of the heavy work on the bike. I was wrong (more on that later). Anyway, I started by pulling out the fender strut screws. With that out of the way, I followed the instructions and installed the hardware. Easy-peasy. With the hardware installed, the luggage rack snapped right on.

Of course, eagle-eyed readers will notice right away that I put the hardware on wrong the first time. I swapped the lugs front to back on the initial install, and after figuring out that the rack didn't fit, I rectified that situation post haste.

My biggest complaint here is that the big bolts that hold the fender to the fender strut from the factory are Torx heads, and the bolts that come with the quick release hardware are hex/allen head. One or the other, Harley. Pick a road and stick to it, por favor.

There, fits like it was made to go there.

One of the first things I noticed when I picked up FleetBob—aside from the buzzing from the fuel cap—was that the mirrors were pretty ineffectual. Going for style over substance, Harley decided on short-stemmed mirrors for the Fat Bob. While this looks good, those short stems and the shape of the bars make it so that you're usually just looking at your shoulders instead of the road when you look in the mirrors. I got a pair of round mirrors for FleetBob because I prefer round mirrors and the stems were a bit longer.

Changing the mirrors out is pretty easy. You just pull the acorn nut off the bottom of the old mirror's stem, pop the new mirror in, tighten up the acorn bolt again, and voila! This is slightly complicated by the fact that the mirror stem and acorn nut setup is also what holds the turn signal on. Thankfully there's a little stud on the bottom of the handlebar and a little hole in the top of the turn signal assembly so you can index it for the correct placement.

This is a bit of a balancing act, but nothing you can't handle.

The Universal Phone Carrier Mount comes with the mount, some screws, two spacers, and two washers. Never mind that funny-shaped washer on the right, it's supposed to look like that.

For as simple as this thing is, I think installing it was my favorite part of this project. Not because it was so easy—and it was pretty easy—but because how clever it is. Basically just a little metal triangle with a knob on the end, the universal phone carrier mount attaches directly to the left-hand handlebar control cluster. All you do is remove the Torx head screws, assemble everything in its place, and zip the new screws back in.

Clever, right? I love how the phone mount uses existing mounting points and unused space to provide a place for my phone. It's a little lower than I'd like on the handlebars, but since at the time of this writing I don't have the phone carrier I haven't had a chance to properly test it out.

On my previous adventures with FleetBob, I used the onboard USB port under the tank to keep my phone charged. I learned pretty quickly that it wasn't up to the task. I never did check to see what the actual output of that port is, but if I was running more than, say, two apps on my phone—Waze and Spotify for example—the phone used more power than the USB port could provide. Eventually the phone would start to lose power and I'd have to pull over, close any other apps (even text messages that had popped up) to get the phone to charge, then ride until it happened again. Sub-optimal. That's why I decided on this handlebar power point.

Installing this was the most complex part of the project. Not hard mind you, but there are a lot of steps and you actually have to remove pieces of the bike to install it. First, remove the saddle. Then you unhook the quick-release fuel line on the tank, unplug the tank-mounted instrument binnacle from the loom, remove the tank mounting bolts, then pull it off the frame. Carefully.

I think this quick-release fuel tap is my favorite thing on the whole bike. Nice work, Harley!

This little guy was hiding under the instrument binnacle, but it came right apart.

Once that's done, you remove the left-hand side cover, beneath which hides a real snake house of wires and plugs. You need to do this to access the nifty accessory port that Harley was nice enough to include on the bike. Now, with everything cleared out you need to route the power point's cable where it won't get pinched by anything and use the handy zip ties that were included with the part to cinch everything down nice and tight. Once that's done all you need to do is plug the power point in, replace all the parts you removed, and you're good to go.

I will admit that doing this to a fleet bike felt a little weird. Anything for a story though, right?

Including some zip ties to mount this part was extremely thoughtful.

The accessory port. Just chilling out down there behind the side cover waiting for you to plug something into it. This is a really smart addition.

There, that oughta solve my power supply problem.

It's pretty nice looking, right? I may end up slinging it under the handlebar, but for now it's good where it is. Now, unfortunately, there's a downside. Once I had everything put together I took FleetBob down to Ypsilanti for the Ton Up. On the way I used my regular car charger to keep my phone topped up. It worked well at first, but after a while I noticed that the power was gone and the phone wasn't charging. Turns out the vibration from the handlebars rattled the charger out of its seat enough to break connection and stop charging. The entire way to Ypsi—and the entire way back—I had to jiggle or reseat the charger every few miles. That, my friends, is kind of annoying. I don't know if there's a good fix for that, but it's something to keep your eye on if you get one of these.

Last, but not least, some more storage! The single-sided swingarm bag is built from a pretty thick leather, has brushed nickel hardware (which I prefer to chrome), and a hard back. The back of the bag has various slots cut in it that you run the mounting straps through. This allows you to mount the bag to a bunch of different bike in Harley's lineup. It's pretty nice and it's easy to install.

That'll keep your bag from scuffing up your swingarm.

First, you stick the clear protective film on the swingarm to keep the bag from damaging the paint. Yes, I cleaned it off before I stuck the film on, jeez. Once you get that done you just thread the mounting straps through the proper slots (this is spelled out for you in the instructions), tighten everything down, and you got yourself a new bag.

The back of the bag showing the various mounting slots.

The strap goes out the top slot, in through the bottom slot, then cinches up inside.

Done! Looks good on the bike and is pretty firmly attached. The buckles have plastic quick-release latches on them so you're not doing and undoing the straps constantly. That said, the outer leather straps can be adjusted for length depending on what you're carrying. So, I like this bag and all—it's handsome and well-built—but it's just too small. As much as I like the bag's shape, it doesn't lend itself to even loading, and it's not big enough to carry a basic three-ring binder without having the binder run diagonally between the back left and front right corners. Even then you have to really push to get the binder in and the flap closed. If the bag were even an inch longer and an inch deeper it'd be perfect. As is, it needs work.

It looks great, I'll give it that, but its size and shape limit its utility.

There you have it. With a pile of parts and an afternoon's work in the garage I made some slight changes to FleetBob that made it dramatically easier to live with day-to-day. Everything I did here was pretty easy, and if you're even the smallest bit mechanically inclined you can do it as well. I didn't mention the day bag luggage you see in some of the photos because you don't actually install it. You just clip it to the luggage rack and you're good to go. It's super nice, roomy, has reflective piping on it, and is easy to get on and off the bike. I know it's not perfect, and I know it's kinda weird to put more parts on what's ostensibly a bobber, but I like it and that's what's important. Now that I have it just right, I think it's time for another adventure.