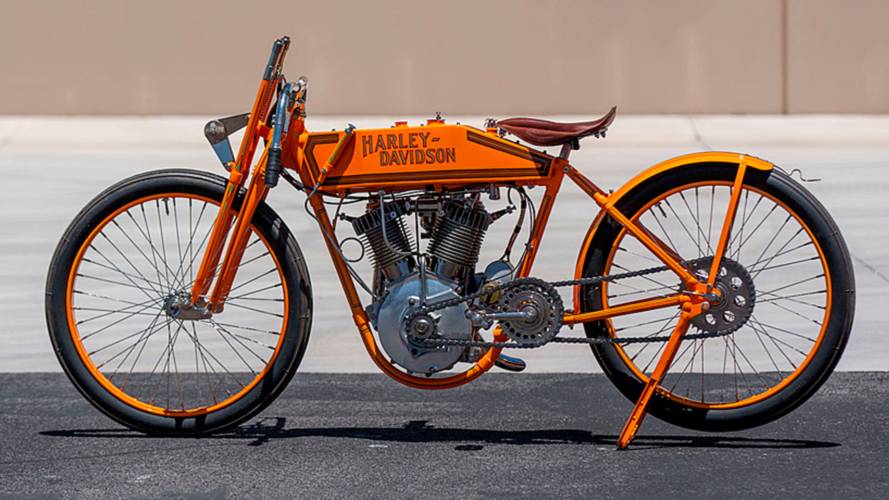 A super rare Harley-Davidson racing 11K was found in Argentina and restored back to its original shape. The model is now going up for auction.

It's old, it's orange, and it used to be fast

In modern days, the name Harley-Davidson isn't one people tend to associate to racing, unless they are familiar with flat track. There was, however, a time in history when H-D tried its hand at a more classical form of racing and very few of these racing machines remain to this day. Thankfully, some dedicated souls restored one that's over a century old.

UNSUNG HEROES: You're In the Army Now - Motorcycles at War

Harley began racing as early as 1904 at the Milwaukee Mile. This got the brand some press coverage, its first appearance in the media. Management, however, decided not to support the activity. It wasn't until a decade later, in 1914, that H-D entered a racing event once more and the company meant business. Harley brass hired designer Bill Ottoway—who was poached from competitor Thor—and gave him the mission to create a race-dedicated motorcycle as well as put together a racing team.

This is how the Harley-Davidson 11K came to be. Fitted with a 1,000cc, 45-degree v-twin engine, the 11K didn't have any brakes, gears, or suspension—all it was ever meant to do is go fast.

WAR H-D ON TOUR IN US: WWI Vet Returns Triumphant from France for Tour of America

This 1915 orange number was actually found pulled apart in Argentina. It was painstakingly restored to spec, including the 1.25-inch racing intake manifold, 1.25-inch exhaust ports, ported cylinders, rocker towers and rockers with top and side oilers—components specific, and some unique, to the 1915 model.

AN OLDIE BUT A GOODIE: Harley-Davidson Brings Back Bikes to Celebrate Anniversary

The frame and gas tank have been rebuilt and the paint color is an exact reproduction from an 11K on display in a museum. The model even won the 2017 Greenwhich Concours d’Elegance for Most Outstanding Machine.

This 1915 Harley-Davidson 11K will now go up for auction at the Mecum Auction in Monterey in late August 2018.