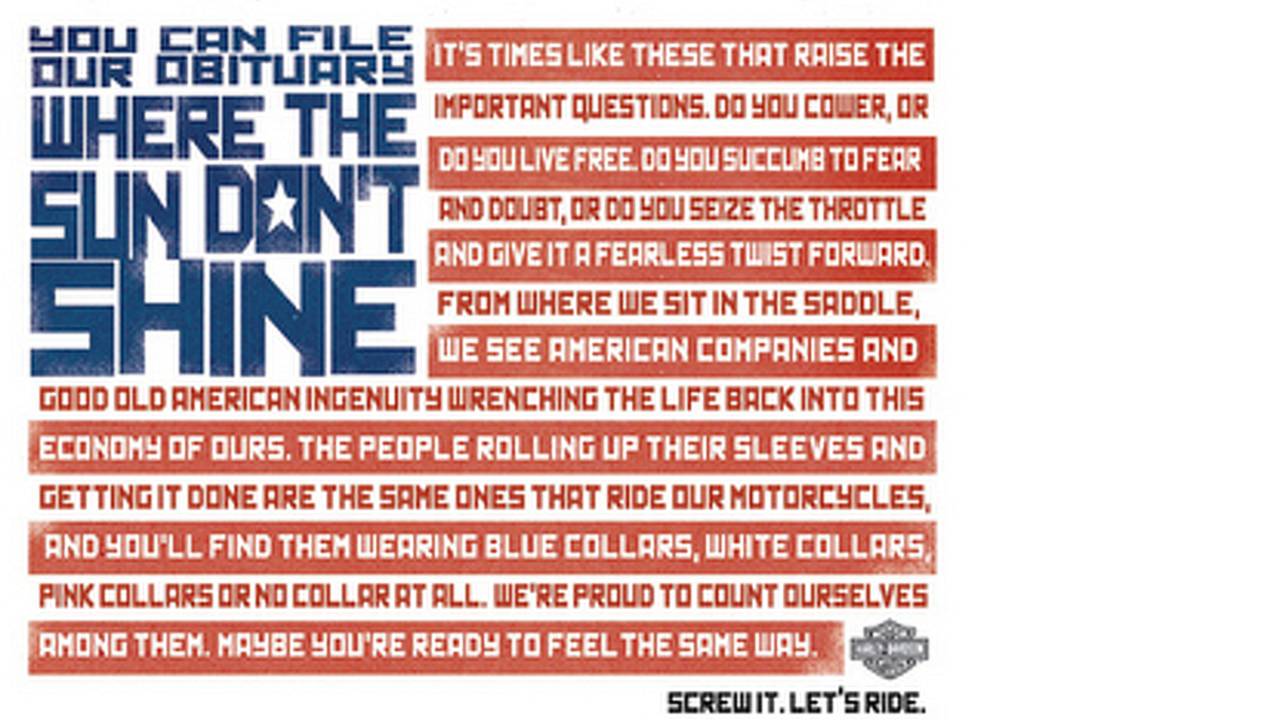 The advertisement above is scheduled to run in tomorrow's edition of The New York Times in response to a business feature from last Sunday that revealed an increasingly desperate financial situation at Harley-Davidson. Rather than addressing the concerns raised by The Times, this ad instead attempts to create some bizarre riposte centered around patriotism, anti-establishment rebellion, class soli...

The advertisement above is scheduled to run in tomorrow's edition of The New York Times in response to a business feature from last Sunday that revealed an increasingly desperate financial situation at Harley-Davidson. Rather than addressing the concerns raised by The Times, this ad instead attempts to create some bizarre riposte centered around patriotism, anti-establishment rebellion, class solidarity and plain old optimism; culminating in an appeal for readers to buy the company's motorcycles. If this is the best Harley can do to reassure employees, dealers, investors and customers in the face of financial disaster, then we're very worried. >

Jim Ziemer, Harley's president and CEO, revealed the ad in the following email to employees:

As you may know, The New York Times wrote a decidedly one-sided and naïve story on the state of our business this past Sunday. Unsurprisingly, Harley-Davidson employees, dealers and customers disagreed.  So, we decided to show how we all feel about this story and created an ad that we are running this Sunday in the same business section of The New York Times.

You can see the ad below.  It reminds me of how proud I am to work with such a passionate and dedicated group of people. There's no question that 2009 will be a challenging year for our business.  But, there's also no question that Harley-Davidson is addressing the challenges. We have the right strategy, the right dealers, the right employees and the right attitude and spirit to emerge from the recession stronger than ever.

Thank you for all you do to support one of the world's most respected and strongest brands, Harley-Davidson.

The article Ziemer refers to, "Harley, You're Not Getting Any Younger," describes the two-pronged impact on the motorcycle maker caused by the Financiapocalypse; not only are sales down, but Harley's sub-prime loan practice has left it nearly devoid of operating capital.

According to The Times, Harley needs $1 billion just to continue to give customers loans through the end of this year. To this date, it's only managed to raise $600 million by borrowing two equal-sized sums from Warren Buffett's company, Berkshire Hathaway and Davis Selected Advisers. Harley is paying 15 percent interest on both loans. If it's unable to continue offering loans to its customers, sales are expected to decrease at an even more rapid rate than they already are.

The Times goes on to describe Harley's focus on making products for and marketing to Baby Boomers over a younger audience as "backfiring." The company was banking on Boomers providing a valuable market for at least the next 15 years, but as 401Ks and other investments have dried up, so has that age group's ability and willingness to purchases new motorcycles. The average age of Harley customers has increased from 42 to 49 years old in the last five years. Even though it makes 50 percent of all heavyweight motorcycles sold in the US, Harley faces much stiffer competition for sales from foreign brands -- which have done a significantly better, if still somewhat questionable, job of appealing to younger people -- among the Boomer's offspring.

"We're encouraging our designers to think out of the box," Ziemer told The Times. "We have to be quicker, more responsive to what our customers want. And we will."

The paper goes on to identify a decrease in customer loyalty as Harleys flood the marketplace and an inability to offload bad loans as further problems facing the company. Stock in Harley-Davidson has fallen 70 percent since last September, comparing unfavorably to a 36 percent decline during the same time for the S&P 500 index.

The story also contains anecdotal evidence of Harley dealers struggling to survive in this climate.

Neither tomorrow's ad nor Ziemer's email does much to address the issues raised in this "decidedly one-sided and naïve story." Instead, it relies on the same marketing and attitude that the article says isn't working to make an irrational case for sales. If we were an employee, dealer, investor or customer, we'd want Ziemer to provide clear and direct answers to the following questions:

What steps is Harley-Davidson taking to design motorcycles for and market to a new audience?

How does it plan to address the shortfall between current investments and the need for more capital to continue current loan practices in the short term?

What long-term sales models is it developing to replace the current practice of financing customer purchases?

Ziemer mentions "out of the box" and "more responsive" designs. What are the details of those? When can we expect them?

If market conditions worsen, which it looks like they will, how does Harley plan to repay Berkshire Hathaway and Davis Selected Advisers?

How does Harley intend to support dealers saddled with bikes they can't sell?

Thanks for the tip, Hermit. Have info or material you want to see published on Hell For Leather? Send an email to tips@cdn.rideapart.com