McCoy on Watson on Female Riders 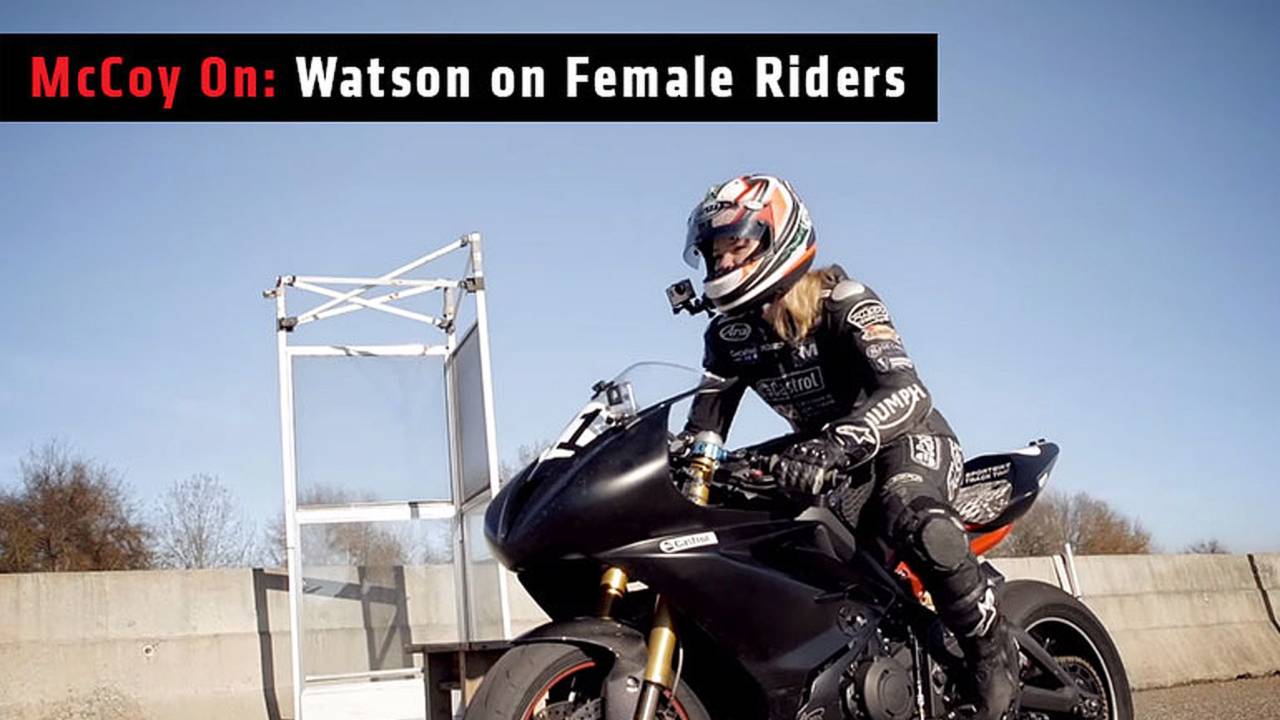 Female Riders have increased year after year but is this because of the industry taking an interest or just more women wanting to participate with or without their acknowledgement?

If you haven’t read Tim Watson’s “Watson on: Female Riders” yet, you should read it now. He raises an excellent question: why?

According to Tim’s article (and the latest figures from the Motorcycle Industry Council), there’s been a 35% increase in the number of women who've bought motorcycles between 2003 and 2012. You’d think industry analysts would be all over a statistic like that, but he’s the first person I’ve actually heard ask, what the hell is driving these numbers?

Now, maybe I’m just hanging out with the wrong people. Maybe, like any other $63.5 billion dollar per year global industry, there are people looking into where their money’s coming from and trying to figure out why so many women have been stricken with moto-fever. Hmm. From my perspective, most of the industry is still seems asleep at the wheel when it comes to female riders.

Except for maybe Harley Davidson. Sure, they commissioned that stupid survey Tim referred to (how they managed to get everyone from the Los Angeles Times to every Joe Blow with a blog to publish something about it is the real story), but c’mon...you can’t fault a company for using sex appeal to sell it’s product. You also can’t claim that this particular company hasn’t set the bar when it comes to supporting women riders. They’ve been doing it for decades, with safety education, peer support, a presence in female-focused industry events, women-specific gear, etc. Harley Davidson has long-recognized the power of girl-power in the powersports industry. More power too ‘em.

Now, about that survey. First of all, HD quite publicly commissioned a marketing firm who’s own slogan is, “helping brands navigate change”. You want to change who you’re selling motorcycles to? Call these guys. They know that the sophisticated American consumer is really only interested in two things: statistics and sex. So, they got a bunch of adult women riders and a bunch of non-riding, adult women (who I suspect were either from a nursing home, in jail, or barefoot in a kitchen somewhere) to take the latest Cosmo quiz and compare notes. They found that biker-babes just feel hotter than their pathetic contemporaries who, results suggest, would rather die than do it with the lights on. The LA Times went on to report that the women riders were less inclined to say they “usually felt good” about their sense of humor and intelligence, but hey, they were almost twice as likely to say they “usually felt good” about their sex appeal, so that’s good. Usually.

Americans affinity for pop culture may have more of an impact on women’s attitudes about motorcycles than our tepid, albeit blooming self-confidence. The T-Mobile girl’s transformation from pink polka-dots to a pink and black Ducati, big Hollywood action-flicks like Kill Bill, The Matrix, Tomb Raider, Salt, The Girl With the Dragon Tattoo...hell, even Disney’s Ratatouille. With a tough-talking, soft-hearted, french-girl-chef who rides not a scooter, but a sportbike. These images sort of sink into our collective psyche, and when we see real-life action heros like AMA Pro Racing’s Melissa Paris, WMX champ Ashley Fiolek, five-time land speed record holder Valerie Thompson or professional stunt rider Leah Peterson (I could go on) doing what they do on motorcycles, well, we tend to get inspired.

Still, I haven’t seen a response from manufacturers or dealers that makes me think they’re dialed-in to what’s going on. Maybe if they’d quit ignoring us at bike shows and demo events, or quit saying things like, “this is a great entry-level bike”, or “it's a great bike for a girl”. Or, the most deadly of all phrases, the salesman’s kiss of death...“women really like this one”. Maybe if the industry would lose these stereotypical guffaws, their fastest-growing customer base would be more obvious – and spend more willingly rather than calculated. The availability of equipment designed for smaller frames isn’t as big of a problem as simply getting women exposure to the inventory that’s already there. It is a problem, though.

In contrast, gear manufacturers have risen to the challenge, giving women more products with sophisticated style, fewer shades of Hello Kitty, and better safety features than ever before. Producing it in the right size seems to stump many, and getting retailers to stock the stuff is like splitting atoms, but it’s out there. I don’t know what the answer is, but I know just about every other segment of the garment industry has managed to figure it out.

Tim’s question is a good one, and the fact that the responses have been so overwhelmingly positive is exciting.

The fact that those of us who pay attention to this sort of stuff don’t know the answer is...what’s the right corporate lingo?...an opportunity for improvement.