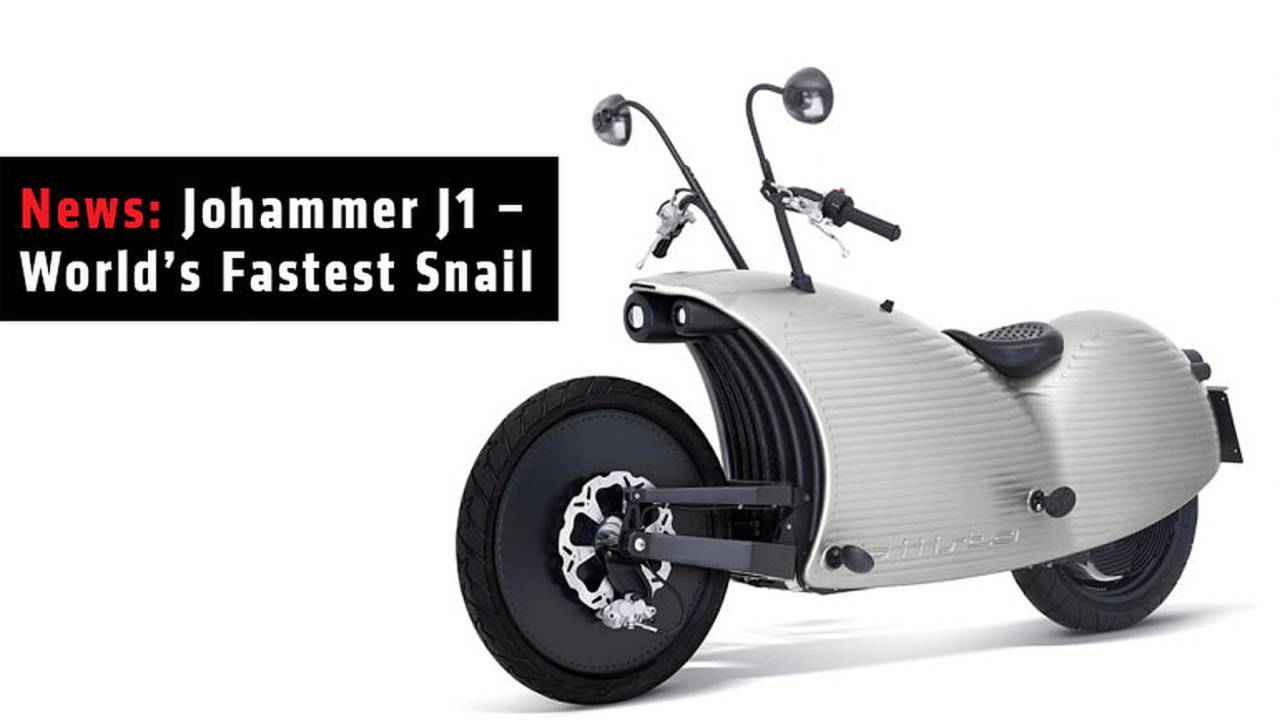 There’s another electric motorcycle company on the block that’s apparently getting prepared for launch with a bike that some people have described as looking just like a terrified snail.

Full marks to technology web site Gizmag, who on seeing the photo’s this week of the Johammer electro-cruiser motorcycle, from Austria, described it as ‘looking just like a very scared snail’.

The Johammer is indeed a very, very odd looking motorcycle but the Austrian company claims that two versions of the bike – the J1 150 and the J1 200 – will both go into production in the near future and is quoting prices for various markets around the world

Back in February, Johammer revealed both versions at the Linz motorcycle Show and announced that the battery technology it has developed means the J1 200 will be amongst the first all-electric motorcycles with a range over 200 kms (124 miles).

At the heart of the J1 is a brushless, air-cooled 11 kW AC motor, with a single gear that Johammer says will be maintenance free for the lifetime of the bike. The motor is electronically restricted to 120 kph (74.5mph)

The key to the J1’s long range is apparently the battery modules that have been developed in-house at Johammer. The company is claiming that its battery pack will have either 124,000-mile charge or last for four years on a J1 without the battery charge dropping below 85% of capacity.

There’s no explanation how fast this bike can travel or what it weighs but we think it might be on the heavy side. It’s just over 86 inches long, stands 51 inches high, with a wheelbase of 57.2 inches and reasonably low seating position of 25 inches. Underneath futuristic, all enveloping bodywork is an aluminum frame and up front hub center steering and suspension rather than a conventional fork set-up.

Controls are sort of like you would find on a scooter with brake and accelerator on the handlebars and no foot controls.

The J1’s instruments are very high tech and speedo and battery charge indicator incorporated into a panel on the mirrors. Whilst this is an interesting piece of technology it’s also on one of the most exposed area on a bike. Anyone like to guess what a replacement wing mirror is going to cost?

Talking of prices – the J1 when it goes into production is not going to be cheap.

Johammer says the J1 ‘allows a totally new driving experience through its silent electric motor. Allow others and yourself to hear the birds sing when driving the Johammer’. That’s if you can hear the birds over the laughter as people point at you riding the world’s fastest snail.

For further information visit the Johammer web site at: www.johammer.com