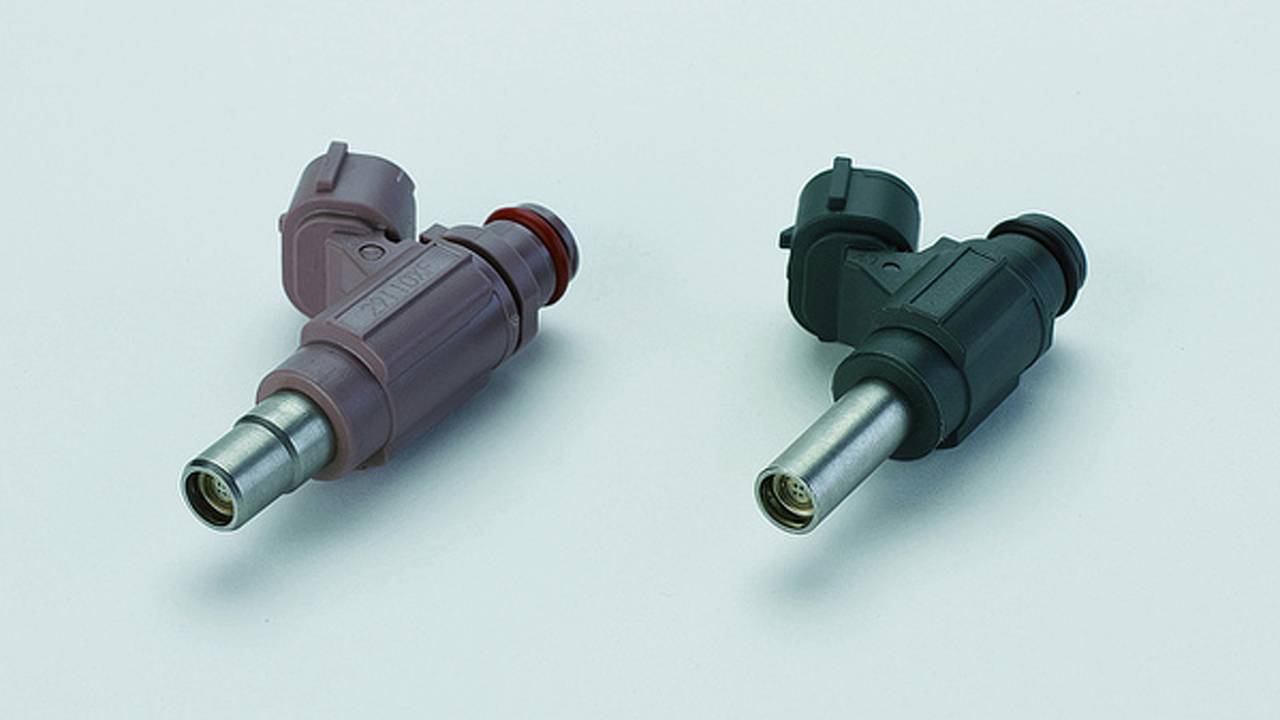 While the KX450 might be a little retarded, the 2012 Kawasaki KX250F has gotten a serious engine management upgrade. Until just a few years ago, MX bikes all used carburetors. The Keihin FCR is a complicated piece of highly refined technology that works extremely well and represents the ultimate evolution of carburetor technology. The first MX fuel injection systems were a little bit clunky. They ...

While the KX450 might be a little retarded, the 2012 Kawasaki KX250F has gotten a serious engine management upgrade. Until just a few years ago, MX bikes all used carburetors. The Keihin FCR is a complicated piece of highly refined technology that works extremely well and represents the ultimate evolution of carburetor technology. The first MX fuel injection systems were a little bit clunky. They stumbled right off idle, lacked the crisp throttle response of an accelerator pump, stalled occasionally, and were less than easy to start under some conditions. The dual injector system helps to bring back the accelerator pump performance of a carburetor. Consider this your warning: shit's about to get technical. For those that haven't logged time running a dyno and spent hours looking at an FCR trying to out-think the engineers Keihin paid millions of dollars, these things may as well be magic. Starting out easy: In a carb, there's a big hole in the middle that air goes through, a fitting where a fuel line attaches and jets inside that always seem to need cleaning. A little harder: There's a main jet, a pilot jet, a needle and an accelerator pump. There is also a choke and often a hot start circuit. These systems work together to mix air and fuel in the right proportions and to make sure that fuel is in the form of a nice even mist and not big drops or rivers. Fuel injection can more precisely deliver fuel, but it lacks the all-important accelerator pump. See, the thing about the accelerator pump is that it squirts a predetermined amount of fuel straight at the intake ports every time you open the throttle and hold it open. As a tuner, that gives you all sorts of flexibility when you're trying to make a high-strung race motor run right. Anyway, that squirt of fuel lasts anywhere from less than one second to maybe 5 seconds. By changing a leak jet in the circuit you can adjust it to do whatever you'd like. Regardless, it lasts much longer than one revolution of the motor and at some point fuel will be getting squirted toward closed ports. It also comes out as more of a stream and less of a mist. That fuel hangs around for a while (not a long time when you're talking about a motor that opens and closes its intake valves 6,750 times a minute). Eventually, it all evaporates and gets sucked into the motor where it's burned. Mixing air and fuel in this way means you get a nice evaporative cooling effect, a slightly richer mixture, and a ready-to-use air fuel mixture hanging around in the intake tract. All of those things add up to a really crisp response when you open the throttle, especially right off idle. A fuel injector works differently. It's got a pressurized fuel line hooked up to it and a couple of wires that control a solenoid. There's also a little black box with a miniature Jean Luc Picard inside who drinks green tea with his legs crossed, contemplates the universe and decides when to fire the solenoid. Just kidding. I don't know exactly what goes on inside the computer. Fuel comes spraying out the injector holes when the solenoid fires and the tiny holes see to it that it comes out in a fine mist. Also, note that a carburetor is a mechanical, analogue device and an injector is digital. The carb supplies fuel to air that passes by, whereas the injector fires off short bursts of fuel to air a sensor tells it is probably passing by. A carb also has the advantage of effectively having several different overlapping maps that can be tuned any way they need to be to suit the motor.

Like I said, the Keihin FCR carburetor is a serious piece of tech. Here's where the 2012 KX250 comes in: Its system uses two injectors. One is placed in the usual spot, just past the throttle plate where it can take advantage of turbulent air. The other is inside the airbox and pointing toward the throttle body. The concept isn't all that new — sportsbikes have had dual injectors arranged this way for a long time now. What's different is that it's been adapted to work with a single-cylinder motor that's a lot more finicky and high strung.

Here's where things get interesting: The green injector uses the turbulent air rushing past the throttle body at small throttle openings to help mix the air and fuel together. A consistent (homogeneous) mixture burns more completely and that means more power. All of that evaporated gasoline also cools everything it comes in contact with. The cylinder head, valves, piston, cylinder, combustion chamber and throttle body all benefit from that cooling effect. Even the exhaust valves benefit for a moment when they're open at the same time as the intakes. Cooler parts mean a more dense intake charge which, again, means more power. They also mean stuff is less stressed. That doesn't necessarily mean that it's less likely to break, just that Kawasaki can push harder and run an even more aggressive tune and, drumroll...more power. Where does that secondary injector come in? Well, since it sits way back in the air-box, it's spraying fuel into a much larger and slower moving volume of air. That air is going to take longer to reach the valves and that means more time to get swirled around, evaporated and turned into a nice homogeneous mixture that pulls heat out of anything it touches. So there you have it. This is real technological progress and I'd say it makes up for the weak launch control they're selling on the KX450. Basically, that secondary injector will make the KX250 feel like it's got an accelerator pump. It creates an air/fuel mixture that hangs around for a minute, better mixing itself up and enables a big dose of fuel to be dumped into the intake when you whack the throttle open. This means that the stumbles that have characterized MX fuel injection are gone, it means when you open the throttle, the bike does what you expect it to, and it means more overall power is available when you want it. Kawasaki
++
Got a tip for us? Email: tips@rideapart.com