The James Hunt Tribute. Will it live up to its hard-partying, playboy name? 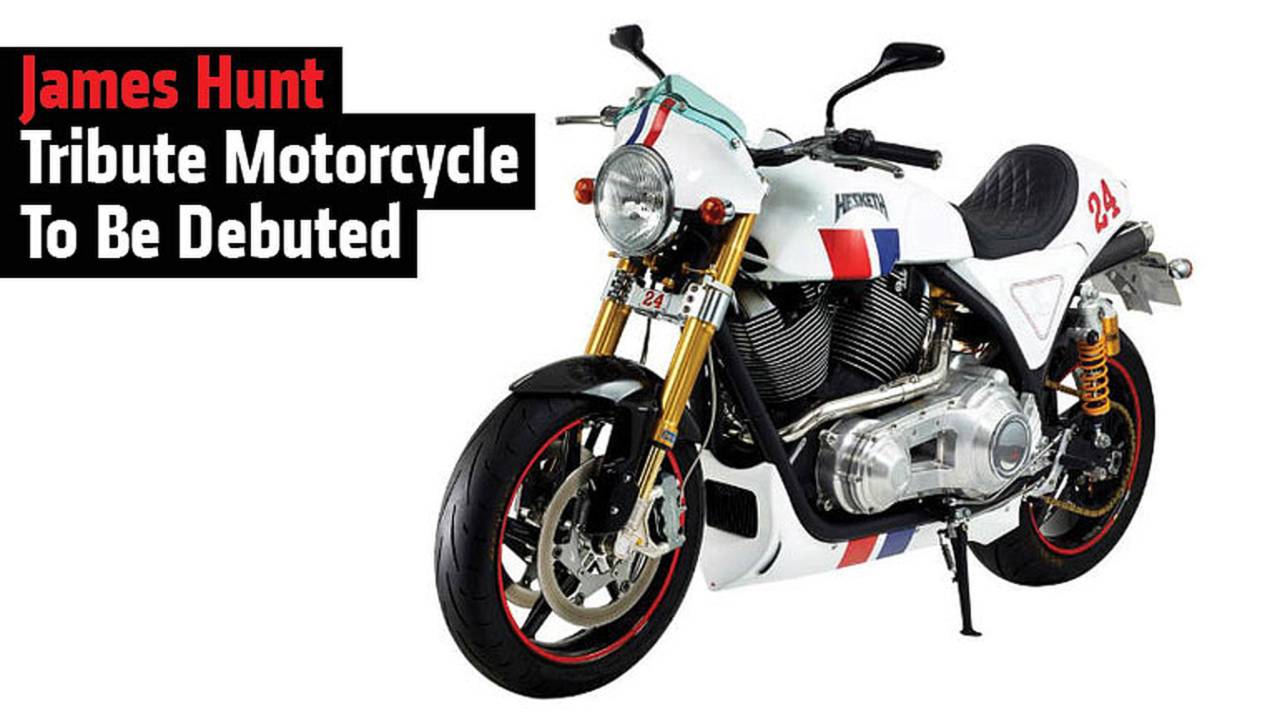 A James Hunt tribute motorcycle is set for production by a name synonymous with the famous F1 champion, Hesketh.

If you love motorcycles as much as you love racing – and really, who doesn’t - than you’ll be truly excited about news of the unveiling of the Hesketh Motorcycles James Hunt’s #24 F1 tribute bike. Called the “24”, this is the first new bike under the Hesketh  moniker in almost thirty years. Production, of course, is limited to only 24 bikes to keep with the #24 theme.

The company has fallen out of the news and changed hands a few times since its 1980 launch. In 2010, Paul Sleeman bought the company and became the brains and muscle behind the project. The first bike is being built on his property – which we’re not sure if its his house or factory.

While I’m personally not a big fan of wine-and-cheese style racing that is F1 and much prefer MotoGP if I’m going to while away my time in front of the TV, I do think James Hunt was a badass – the crappy movie withstanding - and a fitting figure to name a loud, outlandish and fast motorcycle after.

You may remember reading about it back in December, 2013, as the first plans were announced at the Birmingham Motor Show in the UK November, 2013. Earlier this month, Hesketh unveiled the actual bike online and will be seen for the first time ever at the Goodwood Festival of Speed this weekend, June 26-29th, 2014 in West Sussex, England.  As they say in England, Huzzah!

Hesketh decided to pay homage to both motorcycles and F1 racecars and choosing a big thumbing V-Twin from S&S Cycle was an arguably smart choice (comment below). Outlandish torque and plenty of hard-thumbing sound, it vaguely resembles the original, bulky Hesketh V-twin.

“The American V-twin was chosen as we wanted a reliable and proven power train for the bike that could offer enough power. Unfortunately after extensive research and many years development an alternative could not be found from a British manufacturer,” said Charlotte Hempsted a representative with Hesketh Motorcycles. “We are very pleased with our choice of the S&S X-Wedge engine and have had a very positive reaction to this choice of motor.”

While it isn’t British power, it is still a dominating engine and, if you know your stuff, you’ll know that S&S has a solid track record. Also, they aren’t the only British company to use this power plant as it’s the same S&S Morgan uses for its 3-wheelers (which we want to drive, or ride, or whatever more than words can express).

The Hesketh is an interesting mix, combining a traditional Harley-based drive train with a sport bike suspension and custom metal work. Hesketh uses the S&S 117ci V-Twin (1950cc) that normally produces 99 hp and 116 lbs of torque, but after some work from British tuning facility, Harris Performance Engines, it pumps out 120 hp.

If you’re a traditional Harley rider, than you might not recognize the S&S power plant - it’s the new X-Wedge series engine with a futuristic looking top end, but with a traditional outward pushrod design.

It’s sold as either an 117 ci or massive 132 ci. S&S mimicked a lot from the auto world with its rod and bearing design and low-mass valve train. It used three belt-driven camshafts, creating a smaller overall package than the company’s other V-twins. Hesketh will offer different performance options for the customer’s desired power.

The gas tank amazingly sits underneath the engine and trans and the exhaust twists below the seat and exits under the rear fender. The American-built, chrome-moly steel frame uses Ohlins inverted forks and rear shocks and suggests the bike will perform, but we doubt any of the owners will actual thrash on this bike, let one leave the driveway under its own power or really, ever get turned over more than a few times a year.

Pricing is not cheap, 35,000 pounds, which according to today’s exchange rate comes close to 60-large. Production is said to start in eight weeks and we can only assume that the entire bike will be heavy with the custom primary and the Baker 6-speed.  That said, Hesketh hasn’t yet released the weight.

Lord of the Manor: The History of Lord Hesketh

Some history, before you start a flame war in the comments about the bike: Hesketh was founded by Lord Alexander Hesketh who was the one of the last privateers to win an F1 Grand Prix with James Hunt behind the wheel.

If you watched the Ron Howard movie Rush, Lord Hesketh was the eccentric, well-dressed owner who always had a glass of champagne in one hand and was fixing his hair with the other.

After his F1 ventures, he set out to save the British motorcycle industry creating: Hesketh Motorcycles. In 1980, a prototype was built and two years later the Hesketh V1000 was produced at the Lord’s personal estate. It was a bust and only 139 were built during the 1982 production year.

He tried again in 1983 with the Hesketh Vampire, but only 40 were built this time. The Hesketh named changed to Hesketh Motorcycle ltd. and stayed alive even after the Lord left his manor.

Continue reading for photos and specs: The James Hunt Tribute. Will it live up to its hard-partying, playboy name?

Mick Broom who helped with development and was a test rider for Hesketh, purchased what was left of the company in the late-80s. He held onto the brand, never seriously manufacturing a new motorcycle, but spent most of the time building leftover V1000s, as well as servicing and upgrading them. Triumph approached Hesketh Company about building the V1000 after the Bonneville, but lacked the money to do so.

In 2006, the company moved but took a hard hit when they were robbed in the process. Sleeman purchased the company in 2010, started working on this tribute bike and recently finished a run of updated, production V1000s too.

The question remains: is this a decent attempt at honoring a driver and car like James Hunt and the #24 Hesketh?  Sleeman claims he is using as many British parts as possible, but it’s an American V-twin on an American-built steel frame, what do you think? Comment below.

Specifications at a glance: