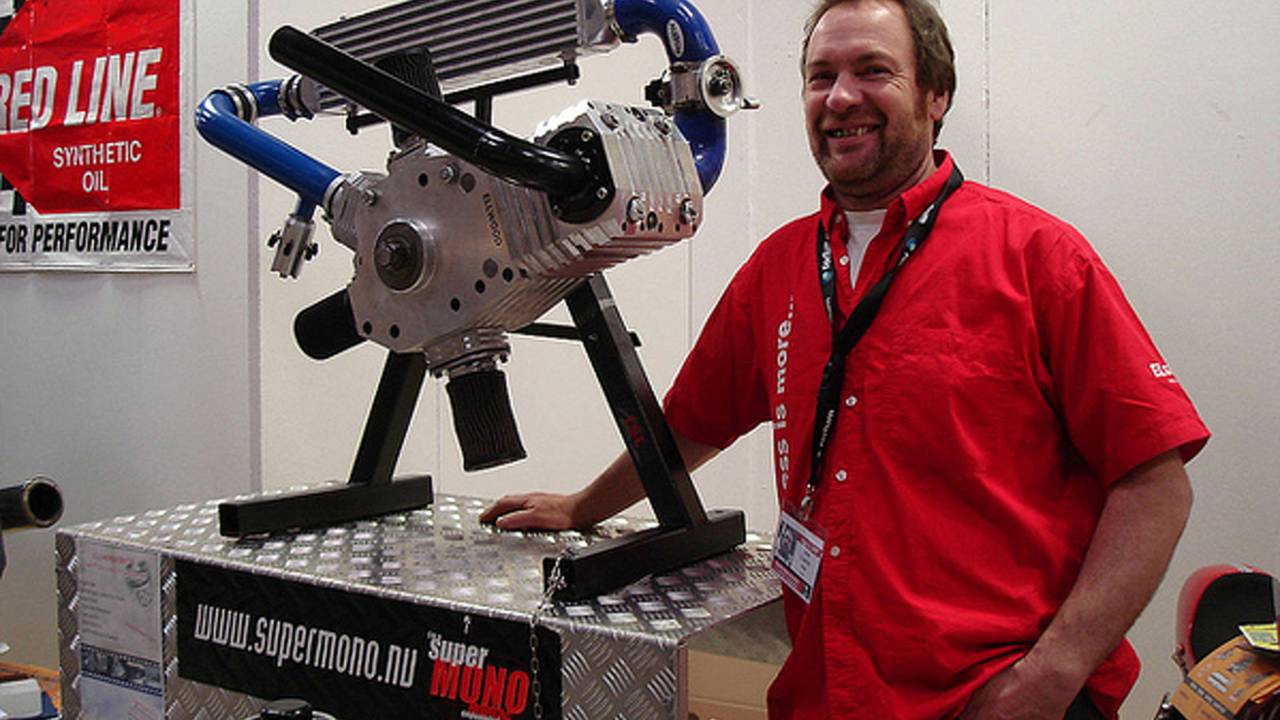 Conceived in Siberia after an unfortunate encounter with a dentist's ultra-sound machine and 100 days of 'medicinal purpose' Vodka, the Ellwood Hybrid is as strange and crazy as its maker, John Ellwood. Essentially a greatest hits of internal combustion, it breathes through the crank cases with reed (one-way) valves and uses the underside of the piston as a sort of supercharger to compress air and...

Conceived in Siberia after an unfortunate encounter with a dentist's ultra-sound machine and 100 days of 'medicinal purpose' Vodka, the Ellwood Hybrid is as strange and crazy as its maker, John Ellwood. Essentially a greatest hits of internal combustion, it breathes through the crank cases with reed (one-way) valves and uses the underside of the piston as a sort of supercharger to compress air and send it to traditional cam-operated intake and exhaust valves. It's a hybrid of two and four-stroke engine design. Is it the next big thing in power, efficiency or emissions? No, but it is a strange motor with a stranger story.

"Out of work, destitute, and hungry for adventure, I signed up for a job in Kazakhstan and rocked up in Moscow with a gang of 15 blokes I'd never met before, loaded the plane with 30 tons of paint, timber and loads of other crap. The pilot took a chance that the little plane would lift off and flew us to Dzezkazgan in darkest Siberia. It was -40 degrees when we disembarked and lasted off our payload. The intense cold gave me an instant toothache, lasting four months, during which a visit to an ultrasound machine at the local Russian dentist, which fried my brain cells, followed by 100 days of non stop medicinal purpose vodka. One night I dreamed of an engine; a vision that would give me an undaunting passion into engine development. Hasse Holmqvist sold me an aging Godden engine for 80 pounds. A hacksaw, drill and file were enough to slaughter the speedway engine. A bit of rubber pipe, two reed valves from an RD 350, a seal on the crankcase and a carb from a Rotax converted a relic into a Hybrid."

In a two-stroke engine, the spark plug ignites an air/fuel mixture with each revolution of the crank shaft. Air, fuel and oil are drawn into the crankcase and forced by the piston up into the passages of a swiss-cheese-like cylinder where they can then enter the combustion chamber. The piston moves up, sealing off the ports, the plug lights the mixture and as the piston is forced downward, spent gases are exhaled via exhaust ports. There is some aerodynamic black-magic at play to help fill the cylinder and to direct exhaust gases to the exhaust ports using the intake charge coming in from different ports. Don't worry, I didn't understand it until I took one apart either.

In a four-stroke engine, there is one combustion cycle for every two crankshaft revolutions. Instead of using cylinder pressure in conjunction with a swiss-cheese cylinder, air and fuel enter and exit the motor through the cylinder head and flow is controlled by mechanical valves that are actuated via cam shaft. The four parts of the cycle are: Intake; intake valves open and the piston is moving down. Compression; valves stay closed and the piston is moving up. Combustion; valves stay closed while the air fuel mixture burns after being ignited by the spark plug. Piston moves down. Exhaust; exhaust valves open and the piston moves up, forcing spent gases out.

The advantage of the Ellwood is that it uses two downward strokes of the piston to compress the intake charge for one combustion cycle. Before you scream eureka and wonder why no one has thought of this before, let me tell you about the downsides.

It's a dirty motor.

Two-strokes disappeared because they burn oil along with their fuel and that delicious smelling two-stroke smoke is actually bad for our environment. It kills trees, pollutes the air and will probably give you cancer. Four strokes don't have combustion gases swirling around down by their crank shafts, so there's no need to add oil to the fuel supply. They run much cleaner as a result.

It gives up advantages of both four and two-stroke engines.

You can tune the valve timing and lift, port shape and air-box size of a four-stroke engine to make sure the right volume of air is ready to be inhaled at just the right time. That's one way modern sportsbikes have such amazing specific output (140bhp out of 599cc in the case of a built CBR600 motor). The easiest way to understand this is to compare it with a beer bong. Your mouth represents the intake valve, the funnel represents the air-box and the tube represents the intake tract. A precisely metered amount of booze waits in the funnel and tube until you open your mouth, at which point, it rushes down your throat at high velocity, building momentum as it does so. You end up over-filling yourself with booze and get drunk faster. With a tuned intake, you over-fill the cylinder with intake charge and make more power.

Two-strokes have their own version of this. Intake charges are forced around in the crankcases, up through the ports and finally, combusted. When they exit, the gases are accelerated to a very high velocity, via a small-ish exhaust port and power-valve, into an expansion chamber. Again, momentum is built and the result is a vacuum in the cylinder/combustion chamber to be filled by fresh charge.

The two-stroke style induction means a tuned intake is mostly impossible and the four-stroke exhaust valve means an expansion chamber would be of no help either. Having both two and four-stroke plumbing also adds complexity, size and mass. Running as a four-stroke single without a controlled volume of air under the piston also means you're using power. In a regular four-stroke single, the air in the crankcase compresses as the piston moves down and then expands, returning energy as it moves back up.

What is it good for?

If there existed a dyno chart for the 1300cc single, I'm certain it would show an absurd amount of torque at low RPM. Because it relies heavily on mechanical movement for its induction, it will achieve a very high efficiency at low RPM by over-filling the cylinder. Think of it as a very inefficient supercharger built into the crank cases and you're on the right track. The design could be refined and fuel injection, turbo-charging (even more complexity!) and/or a computer operated power valve would likely see it spit out power numbers on par with contemporary production motors. As it is, it would make a very good generator motor and return diesel-like efficiency.

Ellwood has also been racing with Hybrids since 1996. First in Swedish top-fuel drag racing as a 500cc, then in 1997 road-racing with a Hybrid and in 1999 he converted a 500cc Jawa speedway bike to run as a Hybrid. Since 2008, he's been working on creating the 1300cc version of the Hybrid you see here. As you'd expect, it's inneligible for most road race classes, but it has seem some success in Ice Land Speed Record Racing, where it achieved a top speed of nearly 95mph. In addition to the Hybrid, John is also developing a two-wheel drive ice drag racer, motorcycle gloves with built-in rearview mirrors, an air-driven jet sledge and a motorcycle handlebar controller for the Playstation 2.