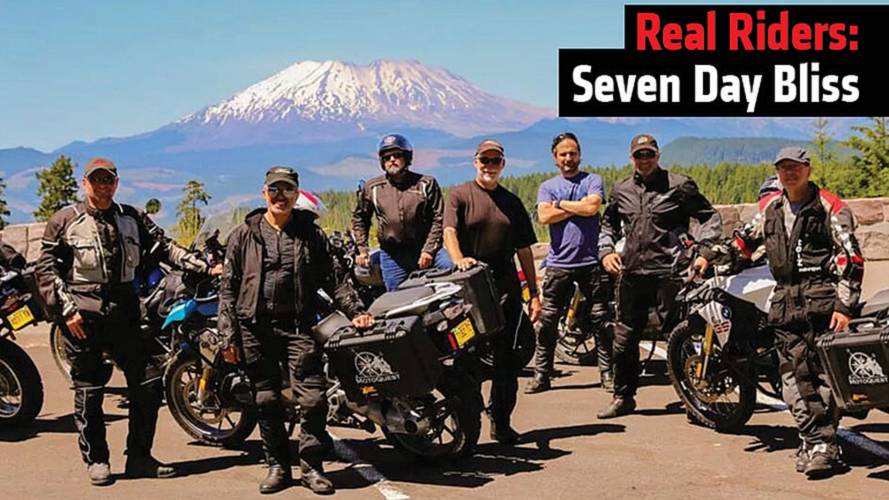 Seven Real Riders take on the wild of Oregon, Washington and Canada to bond, eat and ride like nobody' s business.

Four years ago, after being introduced to the only man who could force me to join Facebook, I became a born-again rider. I now have nine “friends” and we try our best to all meet together at least once a year to ride. Prior to this moto-rebirth, I had evolved into more of a fix and flip, tool-around-town kind of rider. I grew up on mini bikes, dirt bikes, raced moto-cross as a teen, road raced with MRA, AMA and WERA in my 20’s and finally sold the race bikes and bought a GPZ550 as a commuter in my 30’s and 40’s.

Since my restoration, we as a group have come together to ride Keith Code’s Superbike School, various track days, SOCAL Supermoto, mounted KTM’s in Peach Valley dirt in Montrose Colorado with Elite Motorcycle Tours and have ridden over 40,000 miles together in West and Southeast.

As my wife and I pulled into my friend's driveway, I saw it. Parked in the shadows of a large, flowering Jasmine sporting new tires and Halon shocks, a 1974 BMW R90/6. My weekend was unfolding rather nicely. Three of our group members arrived early to attend Curt Erikson’s “Ride Like A Cop” course. It’s one of a few in the country and arguably the best. From the website: You never see a motor officer paddling around, hesitant to make a U-turn... No, they ride with their heads up and shoulders relaxed; a motor officer's feet are on the boards as soon as the bike is moving. Riding side by side, bad weather or good, in heavy traffic or in pursuit, motor officers exude an air of confidence and control that comes from being an expert in their craft.

That weekend, my wife and I rode the old Bimmer up and down Burnside, Belmont, Hawthorne, Division, up Arlington Heights to Washington City Par and the Rose gardens and back down over every bridge and back road in Portland. We visited every park vista and market and had one of the best extended dates we’ve had in a while. There’s just nothing like riding a vintage bike in a vintage town. On Monday it was time to drop my wife at the airport, get the guys and gear together and pick up the bikes from Motoquest.

We arrived at 8 AM sharp, 30 minutes before they opened their doors. To our surprise, there were six bikes lined up in front of the shop. Generous guy I am, I quickly snagged a nice 2013 water-cooled R1200GS by packing my gear into the attached Pelican Storm iM2600 hard bags. It had about 40K mikes on it. They were all sporting Alaska plates and still a bit Yukon gold dirt. One of my California comrades, a current racer and precision rider and actor noted that in the unlikely event that the bikes were pre-assigned, he would have no problem giving

me the boot. They were. He did. I was dejected. Andrew from Motoquest saw my face and assured me, I would be his best friend in a matter of minutes. He disappeared around the side of the building and reappeared riding sidesaddle, on a 2014 model. Blue with ABS, traction control, four modes of riding and suspension adjustment wearing brand-spanking new dual-sport rubber and only 16,000 miles. Score! Nice try, Hollywood.

Three hours later. Yes, it took us a while. We finally left Portland headed east to Stevenson via I-84 through the Colombia River Gorge. Five BMW’s, a Yamaha Super Tenere and a Triumph Scrambler exploded onto the freeway. Suddenly, traffic came to a standstill and our road captain, local guide, route planner and general fun-hog leader detoured us through the Oregon back roads. A very nice diversion. Riding I-205 South to 26 East took us through the small agricultural towns of Boring and Sandy, across the Sandy river only to find the road north to the interstate closed for construction.

Again a detour, until finally we reconnected on I-84 to the Bridge of the Gods across the mighty Colombia to Stevenson, Washington, where we made our first of many gas-water-Gatorade-and-beef-jerky stops. If the ride along the Colombia River Gorge was beautiful, the route north on Wind River Highway was stunning. Forest and rivers and endless clean smooth asphalt twisties, Meadow Creek Road, Hwy 90 to 2515 then Hwy 90 to 131 were all void of traffic, all the way to the Mount St. Helen’s overlook, where we took the first of many group photos.

In the middle of the Gifford Pinochot National Forest we experienced exactly what the first part of the dual sport means. Our bikes were now showing exactly zero unused rubber to the edges of the tires. We had no problem dragging pegs as long as the view of oncoming traffic allowed it and the bikes themselves we set up perfectly, even fully loaded with gear. From there we took 12E to Selah/Yakima and decided after all that fun on the pavement if we wanted to make our destination of Chelan by dark, there was really no hope of trying any of the Discovery Adventure route today. Merging onto I-82 North from the high desert road from Selah to Ellensburg was hot, windy and fast. Then, a nice break on 97 North through more twisty mountain forest roads from Ellensburg to Cashmere.

All along this part of the state fruit stands and the summer harvest of Washington State just begs you to stop and sample. The giant Rainier Cherries, a blend of golden yellow and red are sweeter than anything I thought possible. A mere three dollars buys you a sharing bag. Arriving in Wenatchee, we could see a massive forest fire building. Helicopters and C-130’s buzzed overhead in a futile attempt to contain it. Smoke turned the sun blood red. We headed north on Alt 97 breathing smoke and ash on the west side of the river all the way to Chelan. As we arrived, now past the burning mountain, passing the wineries and vineyards reminded me of Italy.

As we pulled into Chelan with an hour or two of northern sunlight left, a small beach called our name. After hours and miles in 98 degree heat, the cool glacier fed waters of the third deepest lake in America revived our spirits and then it was time for beer and pizza. Luckily there is no shortage of either.

We headed north to Okanogan and then west to Concully where we took to the dirt. Taking Forest Road into Sinlahekin Wildlife Recreation Area along the N Fork Salmon Creek rd – (NF-38), heaven in dirt. We put the bikes, ourselves and one another to the test.

Eventually, some fifty miles later, it leads you to Sinlahekameen Rd and the isolated Port of Entry at Nighthawk (that crossing closes by 5pm so plan accordingly) into Canada but before it does you can plan for one of the most perfect days in the dirt you are likely to experience on bikes like these. Even the lesser experienced of us arrived at the other end with dirt in our teeth from smiling visor up for so long. The views were amazing, bald eagles and hawks soar overhead and turning off the engine reveals only the sounds of nature and laughter.

Once through Nighthawk we took Rt 3, right into Osoyoos. Crossing the lake, we headed up the mountain to Jack & Alice Newton’s B&B Observatory. You'll see amazing things in the sky, day or night, through a 16" Meade LX200 telescope in an observatory he built by hand. We witnessed a solar prominence about 8x the diameter of the earth. Jack confirmed to my sophomoric friends that it is actually possible to see Uranus through a telescope.

Where a return route on much of the same roads with a few detours, a stop at Whistlin’ Jack’s Lodge on top of Chinook Pass and a few unsuccessful attempts to recreate our magical day in the dirt. The maps were hard to read, the GPS was outdated and the roads were dead ending and deep sanding us without mercy.

At Whistlin Jack's for the night, we lucked out. It was prime rib night and afterward we broke out the Stranahan's and stogies. Arriving back in Portland, I still had a long road home. I was riding my buddies Super Tenere back to Denver and eventually Houston where he started. Temperatures on this trip varied from 57 degrees to 104, but not a drop of rain.

I rode the long way home east and north through Coeur D’Alene, Missoula, Yellowstone & Grand Tetons National Parks, from Jackson WY, into Rock Springs and then east to Laramie. I rode in the dark for the first time the whole trip to Fort Collins and Denver. In the end 2488 miles of some of the finest roads in America on two of the finest bikes available with some of the best friends imaginable made this summer one to remember for a lifetime.