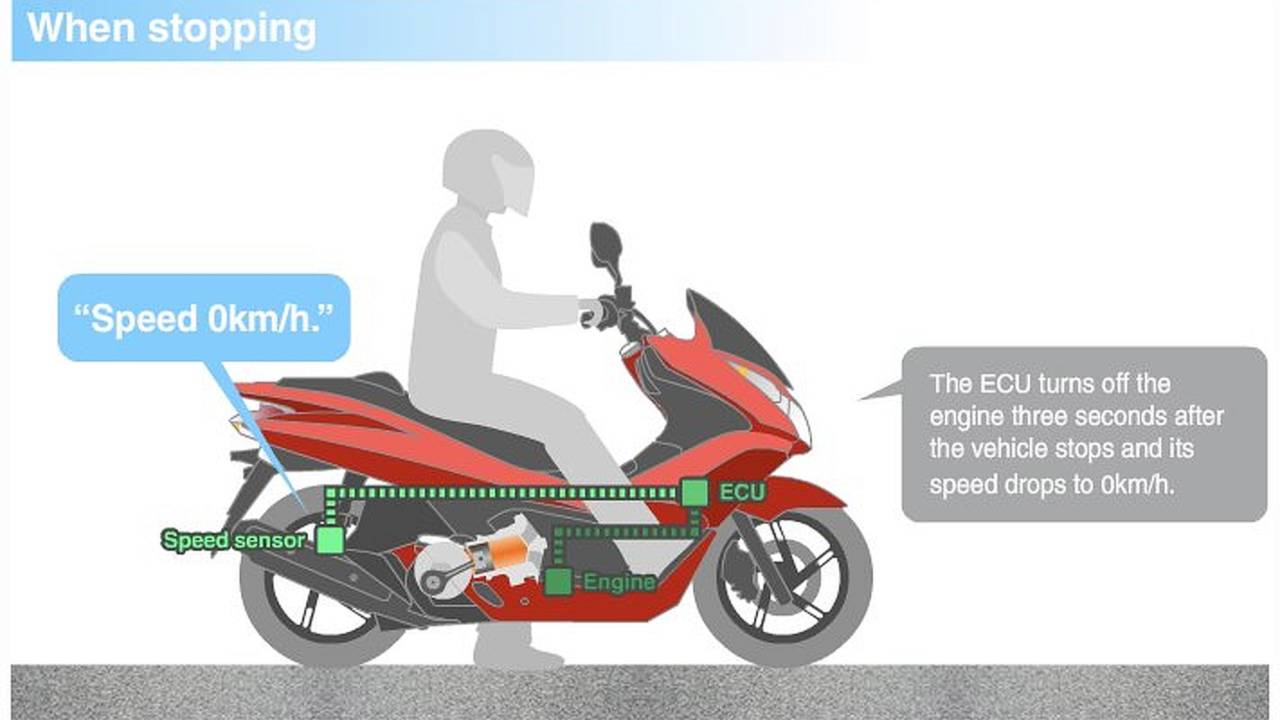 Stop/Start is the kind of common sense, widely applicable, economy boosting technology we can all get behind. The concept is extremely simple — when you’re stopped at a traffic light or whatever, the engine turns off to save fuel; the trick is enabling rapid re-start so you can seamlessly pull away. All together, it’s good for an average seven percent improvement to fuel economy in urban driving. Here’s how Honda’s system works.

We haven’t heard much about Stop/Start in the US for one reason — unlike European Union and other standards, the way the official EPA fuel economy figures are measured doesn’t accurately model the benefits of the technology. If car and bike makers can’t advertise an improvement, then why pay to include the system on their vehicles? Measured using the EU’s ECE R40 urban cycle, Honda claims the PCX125 scooter’s fuel economy — already 125 mpg — improves seven percent. The American market PCX isn’t fitted with the system due to the EPA’s obstinacy.

When you’re idling, you’re burning fuel. Having the engine off during those times would save that fuel without impacting any sort of vehicle dynamics or performance or experience or anything. We’ve driven cars (in Europe) fitted with Stop/Start and they work seamlessly; it can feel a bit odd at first feeling the engine cut out, then cut back in when you open the throttle, but that’s it. We’ve never experienced any lag while pulling away from an engine-off, dead stop in a Stop/Start vehicle.

So the first part of the system’s function is easy. When you come to a dead stop for a set period of time (three seconds in the case of this Honda), the engine turns off. It’s what happens next that makes Stop/Start clever.

On the PCX, the starter motor is integrated with the generator. This eliminates the need for a separate starter motor to engage reduction gears and actually makes a Stop/Start engine more compact and lighter.

Now, overcoming compression to start an engine constantly during urban driving would normally be a huge drain on the battery. The PCX and other Stop/Start equipped vehicles reduce that energy requirement by opening the exhaust valve slightly on stop, decreasing compression while the piston compresses the fuel/air mixture for a restart.

The PCX’s piston also “swings back” to an ideal starting position on stop, meaning it only ever has to do one compression stroke before the engine fires, this further reduces the energy requirement.

Stop/Start requires nothing extra from the rider. You don't need to think about it. Just brake to a stop like normal. Sit and wait for the green light, then roll on the throttle. The engine will instantaneously engage and you pull away like normal.

See why we’re excited? By integrating the generator and starter motor, the engine actually gets simpler with stop/start. Honda even gives you a switch to toggle the system off if, for some reason, you don't want to use it. You save money on gas with no penalties. Neat.