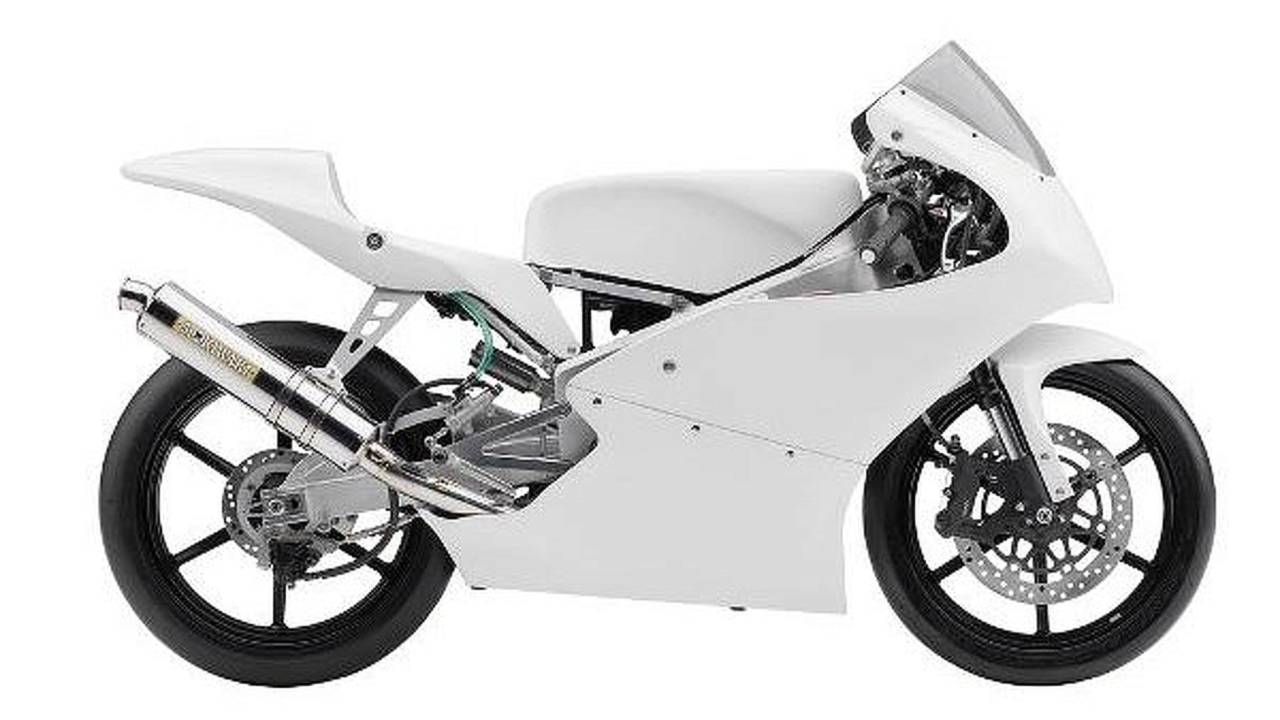 Here it is, the rules that will transform grand prix racing’s smallest class from two-stroke 125s to four-stroke 250s. Other than the obvious two-stroke-racing-dying thing, this appears to be a change for the better. Costs will be controlled through the use of spec components and attainable parts, which should mean better racing, more competition across the field with rider skill, not team budge...

Here it is, the rules that will transform grand prix racing’s smallest class from two-stroke 125s to four-stroke 250s. Other than the obvious two-stroke-racing-dying thing, this appears to be a change for the better. Costs will be controlled through the use of spec components and attainable parts, which should mean better racing, more competition across the field with rider skill, not team budget, being the deciding factor.

Comparing the engine dimensions and maximum engine speed, Motoworld.es estimates a maximum power output somewhere in the low 50bhp range. Combined with a minimum total weight for rider + machine of 148kg/326lbs, that’s going to equal lower speeds and lap times than current 125s, which have a machine-only minimum weight of 80kg/176lbs — a 150lbs difference, more than enough to compensate for a rider — and are rumored to make more horsepower.

A certain glimmer of hope can be seen in the spec ECU, which can be swapped out for another one at any time by race organizers. This should be real skill, not electronics, will be a determining factor here.

Elsewhere, components like iron brake discs and non-pneumatic valves should help keep costs low and racing attainable for a wider variety of teams.

Perhaps the greatest indication of Moto3’s potential success can be found in Moto2. When the rules for that series were first unveiled reactions, including ours, were extremely negative, but the racing has frequently surpassed that of MotoGP this season with a starting grid of over 20 riders.

Engines must be normally aspirated. No turbo-charging, no super-charging.

Pneumatic and/or hydraulic valve systems are not permitted.

Valves timing system drive must be by chain.

The engine is defined as the complete engine including intake system (throttle body, injectors), and one complete transmission.

The maximum price of the engine must not exceed 12,000 Euro. No optional parts or service contracts may be used to circumvent this price limit.

Each engine manufacturer must undertake to supply sufficient engines and spare parts to supply minimum 15 riders per season, if requested.

Each engine manufacturer must submit a spare parts price and lead-time list for the season for approval by the Organiser, and may not charge more than these published prices. Approval is based on the prices and lead-times being in line with current market norms for these parts and technologies.

In the event of engine updates or upgraded parts being developed, these must be made available to all customers at the same time, and respecting the price limits described above.

Only one throttle control valve is permitted, which must be controlled exclusively by mechanical means (eg. cable) operated by the rider only. No other moving devices (except injectors) are permitted in the inlet tract before the engine intake valve. No interruption of the mechanical connection between the rider’s input and the throttle is allowed.

Idle speed adjustment by means of an air bypass system, controlled by the ECU is allowed.*

Fuel injectors must be located upstream of the engine intake valves.

Fuel pressure must not exceed 5.0 bar.

Other than engine sump breather gases, only air or air/fuel mixture is permitted in the inlet tract and combustion chamber.

Fuel must comply with the FIM “Moto3” specification (tba).

Noise limit will be a maximum of 115 dB/A, measured in a static test.

No moving parts (e.g. valves, baffles…) are allowed in the exhaust system.

A maximum of 6 gearbox speeds is permitted.

Electro-mechanical or electro-hydraulic clutch actuating systems are not permitted.

Only the ignition/fuel injection control units (ECU) approved by the series Organiser are allowed.

This ECU must remain unmodified in hardware and software, as delivered by the Organiser. The only permitted changes are the setting (tuning) options included in the software. The Technical Director may require the team to change the ECU on any machine for another standard one at any time.

This official ECU will include an engine rpm limiter.

Only the standard Data Logger system approved by the series Organiser may be used.

* All the parameters identified by this symbol are set/controlled via the above mentioned ECU.

Chassis must be a prototype, the design and construction of which is free within the constraints of the FIM Grand Prix Technical Regulations.

Brake discs must be made from an iron-based alloy.

Suspension systems must be of a conventional passive, mechanical type. Active and semi-active suspension systems and/or electronic control of any aspect of the suspension and ride height is not permitted. Springing must be by means of coil springs made of Iron-based alloys.

The only materials allowed for the wheels rims are Mg and Al alloys.

The only permitted wheel rim sizes are:

The number and specification of tyres allocated to each rider per event will be controlled.

Only tyres from the Official Supplier may be used.

Construction materials must comply with Article 2.7.10 of the FIM Grand Prix regulations.

Camshafts, crankshafts, piston pins must be made from Iron-based alloys.

Engine crankcases, cylinder blocks and cylinder heads must be made from cast aluminium alloys.

Pistons must be made from an aluminium alloy.

Connecting rods, valves and valve springs must be made from either Iron-based or Titanium-based alloys.

“X-based alloy” means the element X (e.g. Fe, for iron-based alloy) must be the most abundant element in the alloy, on a % w/w basis.

Number of machines: the team can scrutineer only one motorcycle per rider.

Number of engines: a maximum of 8 engines per rider may be used during all Grand Prix race events comprising the season. A rebuilt engine will be counted as a new engine.

Teams will be required to register engines at Technical Control on the day before the first practice at each event. Such registered engines will be sealed (excluding cam cover, transmission if applicable) and seals may not be removed except under supervision of the Technical Director. Only sealed and registered engines may be used on track at Grand Prix race events. An engine presented for Technical Control without intact seals will be counted as a new engine.

Apart from the above regulations, all other construction criteria, dimensions and specifications are as per the FIM Grand Prix Regulations.

via MotoMatters (our favorite racing site)