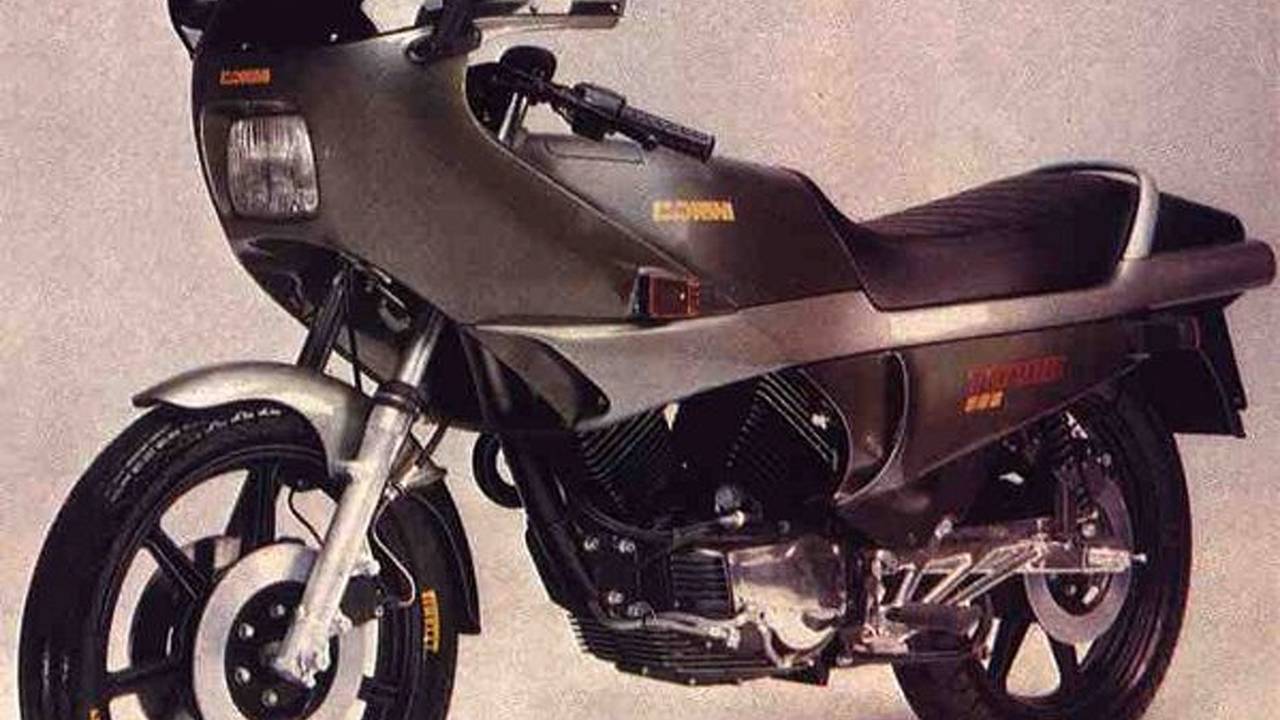 Know how the 2010 MotoCzysz E1pc uses winglets to funnel high pressure air through channels in the frame to the bike’s rear to break up the low-pressure area there? It’s a futuristic solution for the motorcycle of the future, but Michael wasn’t the first person to come up with it. In 1981, the Moto Morini 500 Turbo used a similar solution to achieve both aerodynamic function and cool the rad...

Know how the 2010 MotoCzysz E1pc uses winglets to funnel high pressure air through channels in the frame to the bike’s rear to break up the low-pressure area there? It’s a futuristic solution for the motorcycle of the future, but Michael wasn’t the first person to come up with it. In 1981, the Moto Morini 500 Turbo used a similar solution to achieve both aerodynamic function and cool the radiator that they decided to hide in the fairing so as not to mess up the looks.

That intercooler is there, of course, because there’s also a turbocharger hiding somewhere inside that enormous fairing and, especially because the engine is air-cooled, it needs some means to cool the fuel/air mixture and keep the engine from detonating.

The turbo is there because, in the mid ‘70s, Moto Morini wasn’t alone in acknowledging that it could no longer compete with Japanese on their own terms. Instead of continuing to offer bread-and-butter bikes, the Italian company figured it could combine the speed of large-capacity, water-cooled engine with the handling and simplicity of a mid-capacity, air-cooled v-twin. Yes, someone really did think that an air-cooled, turbocharged, intercooled 72° v-twin would be a simpler solution than something else. Another sign of simpler times was that, back then, the Italians reffered to any motorcycle over 380cc as a “maxi-moto.” Domestic market taxation saw any machine over that capacity slapped with 35 percent tax, so only the most exciting of motorcycles could afford to exceed it. The 500 Turbo was supposed to be such a motorcycle.

Sometimes the “simplest” of ideas require the most complicated solutions. Turbocharging a v-twin was considered so complicated, that it’s largely though Honda made the CX500 Turbo just to show that it could. The longitudinal-v configuration has two problems that aren’t unique to forced induction: dealing with the uneven firing order at low revs and cooling the rear cylinder.

To solve the first problem, Morini decided simply to block off the turbo at low revs. A sensor monitoring inlet manifold depression would operate a distributor which blocked off the intercooler at low revs, feeding the cylinders directly from a single carb. The turbo impellers would still spin of course — they’re powered by exhaust gases, click here for an explanation of how turbochargers work — but they’d just recirculate air inside the intercooler. Above 2 or 3,000rpm — the prototype’s system was rider adjustable — the intercooler would be unblocked and the turbo would begin feed the engine and the turbocharger would begin feeding the engine. The 478.5cc twin was good for about 70bhp and 47lb/ft of torque, motivating the  403lbs package up to 130mph-ish. Morini’s target was to achieve a 70 percent power increase at only a 10 percent weight penalty.

It doesn’t appear that anyone outside of Morini ever rode the 500 Turbo, but the single turbocharge combined with the low engine compression and the turbo block at low RPMs must have led to some significant turbo lag.

The second problem, the cooling, is where that fairing re-enters the picture. In addition to channeling high pressure air though the inter cooler, it also passed that same air around the rear cylinder and over the exhausts hidden inside the tail section. After passing from underneath to over the exhaussts, the air then flowed out of the slats in the RG500-style tail, filling the low pressure area there and increasing the aerodynamic efficiency of the 500 way more than a simple 3/4 fairing ever could.

Sadly, Morini’s attempt to outdo the Japanese by delivering small bike handling with big bike power was rendered obsolete by the predecessor of the modern superbike. In 1984, the inline-four, 16-valve, liquid-cooled, 151mph Kawasaki GPZ900R was unveiled, firmly hammering home the nail in small European manufacturer’s coffins. The 500 Turbo never entered production and Moto Morini was sold to Cagiva in 1987. The brand experienced a brief revival in recent years, but is currently undergoing to slow process of liquidation in Italian courts.