Hipsters vs. Real Motorcyclists: A Guide To Dressing Like a Badass Biker 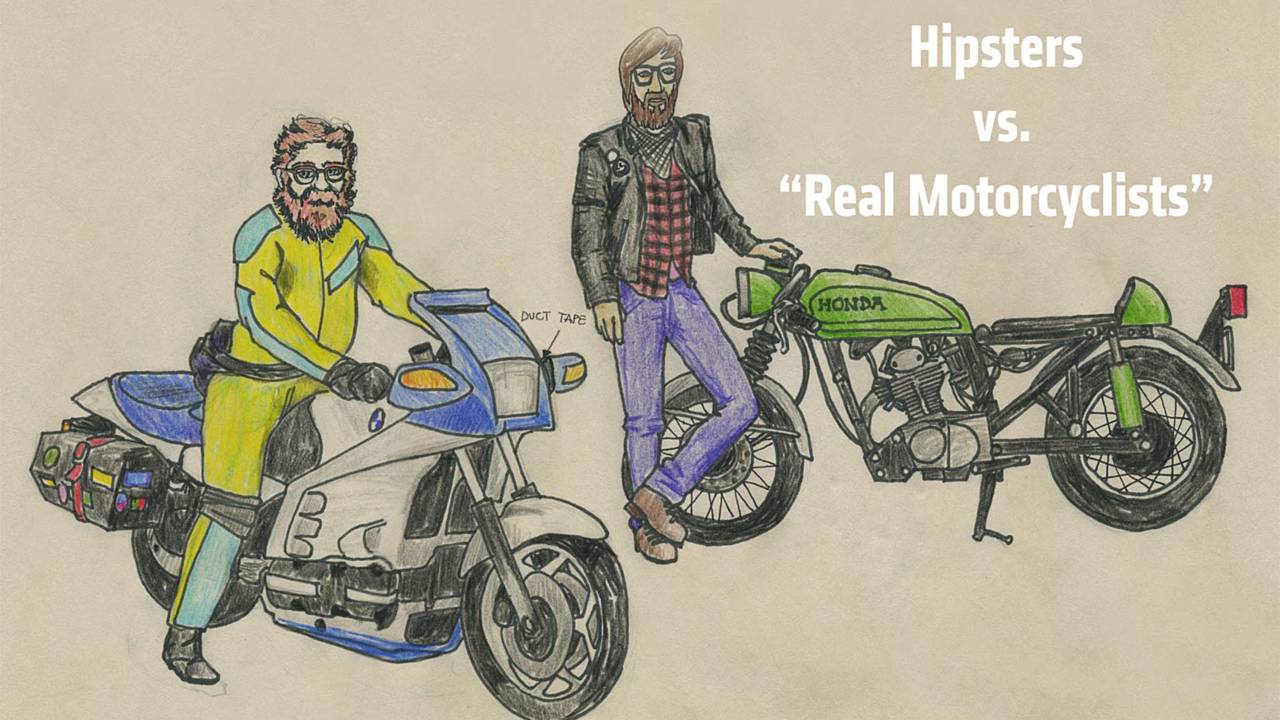 New to bikes and want to make sure the big kids don’t pick on you? Here’s our comprehensive guide to dressing up like a badass biker if you are a hipster.

New to bikes and want to make sure the big kids don’t pick on you for showing up on the first day in the wrong outfit? Don’t worry, RideApart is here to help. Here’s our comprehensive guide to dressing up like a badass biker, whether you think that means riding the 555 or the Iron Butt.

Bike: Any old BMW will do, but it must be an old BMW and it must have shaft drive. “Real” motorcyclists know that chains are for children’s toys. Purchased with the last disposable income you had after you got married and before you had kids.

Custom Work: Black plastic BMW panniers that don’t open any more because you’ve dropped the bike onto them in your garage so many times. Of course, if you can’t open them, you can’t take them off. Now serving as a place holder for stickers from every BMW rally you’ve ever been to. Duct tape holding the fairing on, again to cover damage from all those garage drops.

Helmet: A white Schuberth flip-front purchased at the same time as your old BMW. You know they say helmets only have a five-year shelf life, but you tested this theory in your garage by hitting it with a hammer and it seemed fine afterwards. All those times your kids knocked it off its shelf onto the concrete floor and that nest mice built in there last winter shouldn’t impact safety, right?

Eyewear: Prescriptions your wife picked up for you at the mall.

Facial Expression:  Ahhhhh, some precious alone time. I’m in charge of my own destiny, master of my domain, just gotta make sure I’m back in time to clean out the garage.

Facial Hair: You never got a chance to use that Bowflex you bought to work off the double chins, so a bushy beard is the next best thing. Your wife says, “It’s cute,” but only kisses you on the cheek anymore anyways.

Clothing: An Aerostich Roadcrafter purchased at the same time as your old BMW. Ordered in a custom combination of the most eye-jarringly bright colors ever, it’s long since faded into something that more closely resembles a Teletubby.

Accessories: A fanny pack for your blood pressure medication and to hold your Motorola StarTAC.

Footwear: “Waterproof” boots purchased from the BMW dealer at the same time as your old BMW. They never did keep the water out, but they’re super comfy to walk around BMW rallies in.

Chick: “The Mrs.” stopped riding with you the last time you suggested it was the fault of her ineffectual dieting that you couldn’t support the combined weight of two people and a heavy old BMW and fell over in front of all the other old BMW riders.

Average Ride: Wake up at the crack of dawn and ride 25 miles to the same random Denny’s you go to every week. Enjoy a coffee with Harold, Maximilian and Jerry, who all live in the same suburban neighborhood as you. Complain about your kids’ college funds bankrupting you, then ride home in time to shower and drive your wife to church in her minivan.

Bike: Some ratty old UJM badly converted into a “cafe racer” by the person you bought it from on Craigslist for $500. For some reason a yellow light with a genie’s bottle on it has been illuminated for the last three months. You’d ask Erik at Works what it means, but you get the distinct feeling that if you bother him with a dumb question one more time, he’ll hit you with that funny shiny thing he fixes bikes with.

Custom Work: All that money your parents spent sending you to art school finally paid off. This bike sports the sweetest rattle-can black paint ever seen this side of the East River. You also proudly point out the clubman bars and bullet seat, even though you didn’t put them on there yourself.

Eyewear: Non-prescription black frames that cost more than your Fulmer. These are the most important part of your riding outfit and should especially be worn at night. Upsize for added irony.

Facial Hair: You have a couple options here. A little scruff will let everyone know that you don’t work for the man, but an ironic mustache could complement the ironic glasses even better. Choices...

Clothing: Your childhood idea of a mountain man — flannel shirt, selvedge jeans — just with tighter fitting pants. Since you’re a badass biker now, you’ll also need a leather jacket, just make sure you don’t buy one from the thrift store with armor or that is built to survive a crash.

Accessories: An “I Heart Juice” t-shirt will go with your ironic haircut and facial hair perfectly.

Footwear: You didn’t spend a whole weekend aging those authentic Swedish work boots with a hairdryer and Vaseline for nothing. Actually you did, but it turns out they really complete your riding outfit.

Tattoos: Anything with a swallow or attesting to a nautical past that you definitely don’t have.

Chick: The “Real” Motorcyclist’s teenage daughter. As a sign of your love, you let her borrow one of your precious Fulmers in the wrong size and she returned the favor with a pair of her jeans. Giving chicks rides is great when the two of you are only wearing t-shirts and she doesn’t believe in bras.

Average Ride: Down six PBR tallboys and give it full throttle over the Williamsburg Bridge. Make sure you blip the throttle as you maneuver to park in front of Union Pool.

This is the second illustration in this series, make sure you check out Pirates vs. Power Rangers.