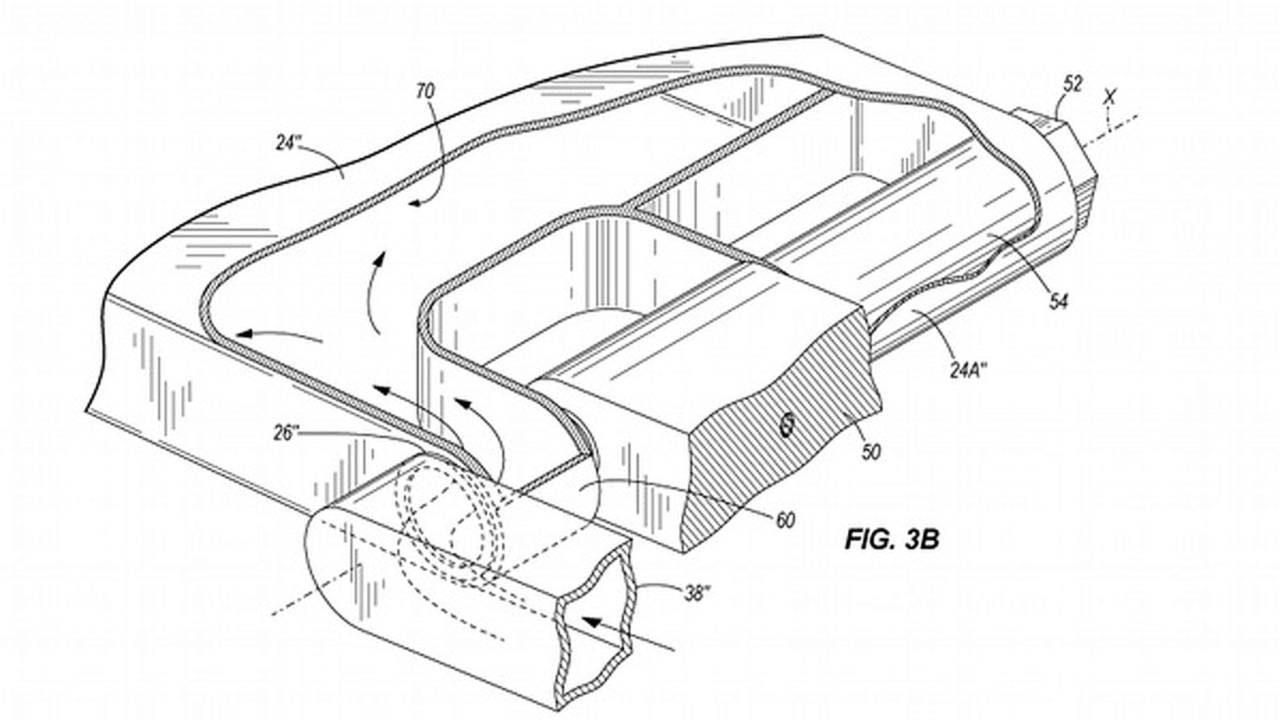 Erik Buell likes to say that the motorcycles he makes, including the EBR 1190RS debuting this winter,  have only just caught up with designs he first penned 20 years ago. Here’s a rare glimpse inside some of his latest thinking, this patent for an exhaust-incorporating swingarm was just published. Somewhat confusingly titled a “Movable Exhaust System” in the patent, the concept here is re...

Erik Buell likes to say that the motorcycles he makes, including the EBR 1190RS debuting this winter,  have only just caught up with designs he first penned 20 years ago. Here’s a rare glimpse inside some of his latest thinking, this patent for an exhaust-incorporating swingarm was just published.

Somewhat confusingly titled a “Movable Exhaust System” in the patent, the concept here is relatively simple: channel the exhaust through the swingarm, housing the components that usually form the exhaust canister inside that swingarm.

This dual role fits with the fundamental tenet’s of Erik’s designs. His frames hold fuel, swingarms in the past have held oil, Harley engines were fun to use and kept his evil corporate masters happy. By housing the exhaust within the swingarm, mass will be made more centralized, the motorcycle will stand up to crashes better, a major heat source will moved away from the rider and the overall number of parts will be reduced. We showed these drawings to an automotive engineer, who doesn’t believe there will be an appreciable increase in unsprung weight as most of the added components are housed directly under or forward of the spring mount. He went on to say that those components were very light anyways and, should there be a slight increase in unsprung weight, it would be more than made up for by losing the weight of an external canister and in reducing part counts.

But get this, the system shown in these patent drawings doesn’t just combine two roles, it adds a third which has never before been possible. When we exclusively unveiled the 2010 MotoCzysz E1pc, we saw that it used winglets to channel high pressure air through tunnels in the frame to the area above the rear wheel. This low pressure area is traditionally a huge problem for motorcycles, effectively pulling them backwards as speeds increase. Like the Moto Morini 500 Turbo before it, the E1pc filled in and broke up that low pressure area with high pressure air from the front of the bike. Taking dual-role parts to a ridiculous extreme, Erik has located the exhaust exit in an ideal location to use its gasses to break up and fill in that low-pressure area, achieving what should be a significant aerodynamic benefit.

These drawing show two potential methods for connecting the exhaust headers to the swingarm: a flexible pipe and a rotational coupling running through the swingarm pivot. it’s the former that will cause the most brow furrowing, but it shouldn’t. Flexible pipes capable of reliably dealing with extremely high temperatures have been around for years now. A nicely-designed cruiser by J.T. Nesbitt from New Orleans employed a flexible pipe made from a nickel-chromium alloy called Inconel to similarly channel its exhaust gasses through a swingarm.

Another potential criticism is also addressed in the drawings, two different solutions for service panels are shown, all of which would allow access to repair or replace the exhaust internals. What’s not clear is how that most possible of motorcycle modifications, the “performance enhancing” exhaust, could be accommodated. Presumably there’d be some sort of ability to reconfigure the gas flow through the swingarm internals.

The application for this patent lists “Erik Buell” as the inventor and includes this abstract:

“A motorcycle including a swingarm that movably mounts a rear wheel to a main frame of the motorcycle and defines a hollow portion through which exhaust gases are passed before being expelled from an outlet of the swingarm. A movable joint may be provided between a header and the swingarm, including a first portion fixed relative to the main frame, a second portion movable relative to the main frame, and a flexible conduit between the first and second portions. The movable joint may be coincident with the pivot axis. In some constructions, the hollow portion of the swingarm is divided into at least three chambers, and a plurality of pipes is configured to provide at least two flow direction reversals within the swingarm between an inlet and an outlet, with multiple volumetric expansions between the inlet and the outlet.”

Erik likes to say that he’s designed hundreds of motorcycles over the years, the vast majority of which remain un-realized. Only time and new EBR products will tell if we ever see the Moveable Exhaust System on a production bike.

Thanks for your help, Bill.