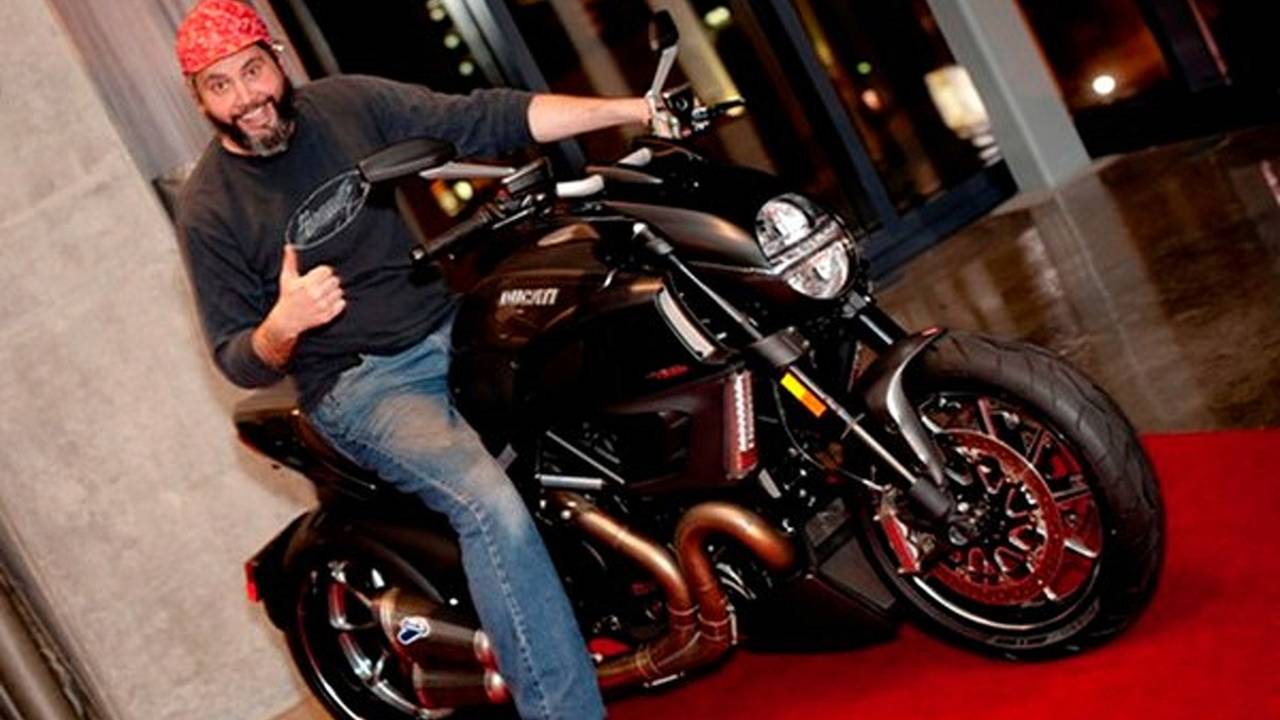 I’ve rarely heard JT Nesbitt as upset as the night after Polaris announced it was acquiring Indian. The motorcycle designer had high hopes that the brand could be revived as an honest-to-god American motorcycle company that didn’t have to make excuses for its products and feared the last chance for that to happen went up in a puff of smoke with Polaris, Victory’s parent company. What can a w...

I’ve rarely heard JT Nesbitt as upset as the night after Polaris announced it was acquiring Indian. The motorcycle designer had high hopes that the brand could be revived as an honest-to-god American motorcycle company that didn’t have to make excuses for its products and feared the last chance for that to happen went up in a puff of smoke with Polaris, Victory’s parent company. What can a washed-up, no-talent, has-been do in the face of corporate blandness? Well, JT (pictured above) decided to issue a challenge. Here it is. — Ed.

In the grand American tradition, I am henceforth issuing you a call out. I can tell by the derivative motorcycle company that you run, namely Victory, that you do not possess the testosterone that would be a prerequisite for having past knowledge of what a “call out” is, so I will elucidate.

In American racing, one party issues a challenge for competition on a level playing field, referred to as “a race track.” I know that this is all new to you, so I will try to take this one step at a time. Anyhow, “the challenger” (that’s me) will usually preface his challenge with what is widely referred to as “smack talk” in an attempt to goad and shame his would-be opponent (that’s you) into taking enough offense that it spurs them into action. Not wanting to break with time honored American tradition, I will now commence with the talking of smack.

Polaris has had years to come up with a reasonable street/sport motorcycle, yet has failed to do so. I think it’s because the management at Polaris must be populated by barnacle butts who think that Harley-Davidson is the greatest motorcycle company in the world. The proof of that is evident in the copycat motorcycles that wear the Victory badge. Falling down on their knees to worship Harley-Davidson at every opportunity, Victory pantomimes a bloated, obese company that, at it’s core, is nothing but a grand marketing scheme dreamed up by a group of Wall Street business types. But I digress, we are not talking about Harley here. Unlike you, I do not care what Harley does or does not do and I do not spend my days dreaming of sucking at the teet of fat Harley profit margins. Yes, it is apparent that all you want to do is dip your biscuits in a tiny drop of that tasty Harley gravy.

But wait a minute, you say, Victory has all of this performance stuff going on, like aluminum chassis and wild overhead cams! Our bikes are bristling with all kinds of bleeding edge technology like Mono shocks and fuel injection! Now I know that it might put a dent in your plans for a mission to Mars next quarter, but I have to point out that your high performance advantage is purely contextual and only holds water when compared to the likes of Harley-Davidson.

But we are competing with Harley-Davidson! And we build the best American Motorcycle in the world! You shout. This is unpatriotic and I am now going to tell you why.

There once was a time, long ago, when Americans took pride in competing with the rest of the world, not just with the folks a couple of blocks over. It was the passion of crafting finer things that motivated men. Now, apparently, it is profit and a desperate groping for a false identity, that perfect marketing message, that motivates you and your cowardly ilk.

The thing is, Mr. Wine, you understand competition. Your company’s snowmobiles are among the fastest in the world. Your snow products can go toe-to-toe with any company in the world. Why can’t your motorcycles?

Tiny companies around the world humiliate you. Small teams of passionate men, with no resources shame you, and still somehow Victory trudges along. “Victory?” What victory? What are you victorious over? “Best Cruiser Of The Year?” That’s like saying best American automobile of 1982. Quite the feather in your cap.

Hey sucka, a Kawasaki GPZ900 from almost 30 years ago would blast into oblivion any one of the motorcycles in your 2011 lineup! A THIRTY YEAR OLD MOTORCYCLE! If for no other reason than pride, I would assume that you would eventually grow a set and build a motorcycle that is better than a now-antique UJM. Yet every time I hear a reference to Victory it is always followed by the pointing out that the parent company, Polaris, is this huge conglomerate with all kinds of engineering, acumen, talent, and money. Frankly, I don’t see it. Bimota kicks your ass. BIMOTA! What, they have like thirty guys working there?! True, the guys at Bimota don’t do tribal flames with quite the same flair that Victory manages to decorate their “Hammer” motorcycle with. It has been thirteen years since the debut of Victory and. since neither polite suggestion, nor your own sense of personal or national pride has seemed to motivate you, it’s time for the insults.

It’s not as if building a decent motorcycle is a task too monumental for a company of Polaris’ size. Look at Triumph. When John Bloor revived it in the early ‘90s, it took them only six years to put a bike on the road that was honest-to-god as good as the Japanese. That first generation of fuel-injected triples were fast, they had good suspension, good motors and looked great. No, they weren’t race winners, but they were motorcycles the British could be proud of. You’re a bigger company than Triumph and we always hear about what talent and resources you have. So why can’t you do what Triumph did? Why can’t you make America proud? You’ve had twice as long with Victory as it took Triumph to bring out those first good bikes and yet you’ve done nothing.

Ah, I remember those heady days, when Polaris announced its intention to build a motorcycle. All my buddies were so eager. Such promise! Finally a real motorcycle made in the USA!! And then the first sighting. With my lips curled, making that awkward smelly diaper face, I beheld the sad Victory. Lumpy and misshapen. An almost comical attempt at building a Harley. The design-by-committee, lowest-common-denominator, JC Penny-looking thing, dripping with every sad cruiser cliché that that first, and subsequent, motorcycles have been festooned with. An anti-intellectual design brief, surely the result of an overreaching accounting department, with no aspirations of attaining any sort of enlightenment about the world beyond Harley-Davidson.

Logic dictates that there must have, at one time, been at least a few true motorcycle people working at Victory (we have quietly infiltrated most organizations), and I could almost hear them speaking through the utterly ugly can-of-corn motorcycle before me. They said “but if we just make a few of these, the boss says that we can build something cool next.” As the years passed, I am sure that the frustrations mounted and, one by one, the disillusioned motorcyclists left your organization. Hey no problem, you said, we will just have to bring in some fresh blood. We will scour the earth for the finest motorcycle talent to bring this product to new heights of avant-garde design! We will engage with the best minds in all of motorcycling, some real world class chassis engineers, super slick stylists and race-winning engine builder. Enter Arlen Ness.

That the motorcycle you currently produce is regarded as something of a joke by real motorcycle people is not at issue. What is at issue is the insult that you continue to perpetrate to American motorcyclists and the anti-American ethos that you have enveloped your company with. To wit: These motorcycles are “good enough” for Americans. By flatly refusing to engage with true American talent, like Michael Czysz, Kenny Roberts, James Parker, Erik Buell, Brian Case, any number of motorcycle designers, racers, and tuners, you have shown yourself to be insular and afraid of stuff that doesn’t justify your current, lame path to anonymity. There you sit in the conference room, eating potato chips, brushing the crumbs off of your clothes from time to time.

Now you have Indian.

Mr. Wine, this concludes the smack talking phase of the call out and we will now proceed to the actual issuance of the challenge where I will lay out some specifics.

I challenge you and the Indian brand to a test of lap times at the Barber Vintage Motor Park in Birmingham, Alabama in one year’s time. Five laps, fastest lap time wins. As for riders (a big variable in motorcycle racing, you see) I am more than willing to enter into arbitration.

I think that me and my buddies can come up with a better motorcycle in my GARAGE than you and your entire chump-ass crew can build in your whack-ass whole factory (oops, a little smack accidentally came out, sorry)!

Now, I don’t expect you to build everything, It’s ok to buy your wheels, battery, electronics and you can even use the engine that you are currently producing (although I wouldn’t advise it) and I, being just a lowly motorcycle dude with limited resources, should be able to buy in my engine. The details of this area could also go to arbitration at your request. Perhaps the readers of HFL could have some input?

So how bout it peckerwood? You down for getting your teeth kicked in by some nobody from a backwater town called New Orleans?

You stated, “We have no desire to start a battle, to get back into the Harley-Indian wars of the ’20s and ’30s, that’s not what we’re trying to do here.” Well, if you’re not prepared to compete with Harley-Davidson, how about competing with me, a washed-up, no-talent, has-been redneck? Think you could at least build a better motorcycle than me? Mr Wine, I am calling you out.

If you haven't already, it's worth checking out the back and forth between JT and Polaris' Robert Pandya in comments.