Memorials to the Riding Man 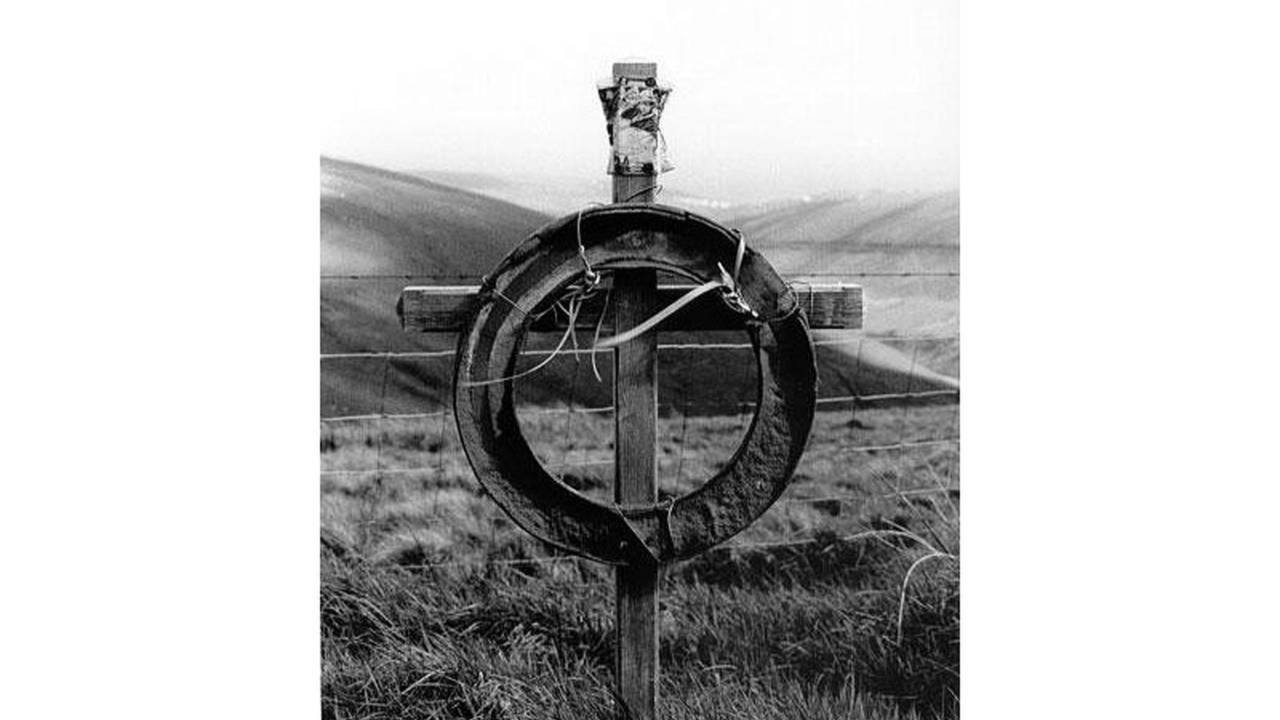 The Isle of Man TT course is lined with memorials to riders. Some of them are big, permanent features of the TT course. The Guthrie Memorial on the climb up the mountain, which is really just a cairn; the Graham Memorial which is an A-framed chapel that looks west down the Laxey Valley; and now the Dunlop Memorial, a bronze statue up at the Bungalow. They’re the exceptions to the general rule, s...

The Isle of Man TT course is lined with memorials to riders. Some of them are big, permanent features of the TT course. The Guthrie Memorial on the climb up the mountain, which is really just a cairn; the Graham Memorial which is an A-framed chapel that looks west down the Laxey Valley; and now the Dunlop Memorial, a bronze statue up at the Bungalow. They’re the exceptions to the general rule, since Guthrie and Dunlop died on other circuits (Guthrie at the German Grand Prix in ’39, and Dunlop in Estonia in 2000.) Even Graham’s chapel was built far from the bottom of Bray Hill where he crashed and died. Officially, little is done to remember the fallen.

The vast majority of TT memorials are much smaller and unofficial; they’re placed by friends and families at the very spot their loved one died. At first, you don’t see them. Then you notice one because it’s relatively prominent, or because it’s new or freshly cleaned. As you get sensitized, you start to see more and more of them, notice ever subtler and older ones, see the ones that are set further back in the weeds. Eventually, you realize that no matter where you choose to stop along the course if you know what to look for, you can see something that commemorates a fallen rider.

They are permanent plaques in stone or metal, screwed to fences or set in the ground. They are personal mementos, stuffed animals or flags or photos, tacked to trees or jammed between rocks. They are flowers, long dried, brown, wilted and molding, or gone altogether leaving a faded bit of ribbon gradually fraying in the constant wind.

Alpine Cottage is a fast but normally innocuous right -hander between Kirk Michael and Ballaugh. The turn-in marker for this bend is the nearby bus shelter. When I stop to study the corner’s line I notice that the bus stop has a ceramic plaque set into its wall, low down in one corner almost at ground level.

On the plaque, there is a glazed bas-relief illustration of a racing sidecar, with Manx and Swedish flags. It reads: "Erected to the memory of Tomas & Mats Ericsson who died near this point in practice for the 1985 TT races. They were brilliant exponents of sidecar racing and fine examples of the youth of Sweden who they represented internationally — competitors in sport and life."

A mile or so down the road, just over the bridge at the entrance to the town of Ballaugh, there’s a fine bronze bas-relief set in a white stucco gate. It is a portrait of a man and since he’s wearing a pudding bowl crash helmet, I’m pretty sure it’s a memorial. I make a note of the name Karl Gall and the date1939, with an eye to checking on them next time I’m in the library.

Later on, I do go to the library and pull the 1939 volume of the local paper. Gall had been one of the leading German riders of the 1930s. In the ’38 TT, Gall had crashed hard at Waterworks and been badly hurt. He’d announced his retirement after that. But as war clouds gathered, the Nazis were determined to wring as much propaganda value as possible from international motorsport. The BMW, DKW and NSU teams all got Nazi support, but it came with heavy pressure to deliver results, especially at prestigious events like the TT. Gall was persuaded to take one more shot at the Senior, on BMW’s all-powerful, supercharged ‘kompressor’ twin. In practice, he lost control going over Ballaugh Bridge, and was flung headfirst into that gatepost. His team-mate, Georg Meier, ended up winning the last prewar Senior on an identical machine.

One time, Steve accompanies me on a bicycle lap. It’s nearly the death of him. I collect him at Ballacraine, which is already a pretty long ride from his house, considering that he doesn’t cycle or get much of any other kind of exercise. We set off up Ballaspur and haven’t gone too far – we’re near Laurel Bank – when he calls out for me to stop. At first I think he just needs a rest, but he leans his bike against a low stone wall and starts to climb over it. “Come here,” he says “I want to show you something.”

It drops away so the wall is only a couple of feet high from the road, but it’s a five-foot jump to the damp and musky forest floor. The Neb, a little stream, gurgles a few yards away.  Hidden here behind the wall amongst fiddleheads are three little plaques devoted to Mark Farmer, a popular rider who died in 1994 while riding a Britten.

“I came here once and noticed that one of these plaques had been removed,” said Steve. “I thought ‘Bloody hell, someone’s stolen one of them,’ but the next time I looked it was back and all polished. They’d just removed it for cleaning.”

We clambered back over the wall. As we got on our bikes, Steve said, “I’ll tell you what my friend… I don’t want to be polishing your memorial around here.”

After a while, I start to get a little paranoid about the memorials, about the danger. Then one day I stop to study Kate’s Cottage. There never was a “Kate”, ironically. The cottage belonged to the Tate’s, but at one TT years back, an excited commentator got tongue-tied and blurted out something about “Kate’s Cottage” and the name stuck. It’s a hairy-looking spot; a narrow, fast, blind, downhill kink with – on top of everything else – a constant trickle of water that flows from a crack in the pavement right on the natural racing line, leaving it damp on all but the hottest days.

Dodging cars, I walk down through the corner to look for (more) hazards on the exit. There, I notice a commercial florist’s bouquet that’s been tied to a concrete fencepost with ribbon. It’s been there a long time, I can tell. There’s a tiny white envelope attached to it; the kind that comes with any basic commercial bouquet, which would normally contain a card with a message from the sender. I slip a finger into the envelope, which has been softened by the elements. It’s empty. No card. No clue who it might have been for, or from. I realize that there is some faded writing on the envelope itself. It says “34th milestone (Kate’s)”.

Something about this one, in particular, sticks in my mind. Sometime later, I walk down the Strand in Douglas and look in on a florist, when it hits me: It wasn’t that someone put the bouquet there, they phoned it in. That was why there was no message in the envelope: there was no recipient, at least no one who needed to read anything. The florist had just written the delivery address down on the envelope, and gone out and tied it to the fence.

The people, friends and family who gather in small groups to place the more permanent memorials are  – at least in part – doing something for themselves. Getting ‘closure’, to put a pop pscyh label on it. But whoever phoned in that florist’s order was doing something very different. He or she was never going to see the flowers; they were going to be placed by someone with no connection to anything. And really, except for me, they were destined to go almost unnoticed.  It was less a public thing than a private message to an anonymous rider, as if he was still out there somewhere, lapping the course.

Something about that flips a neuron in me, and I suddenly realize that, read as a collective, the hundreds of memorials are not sad. Although they often express loss, “You’ll be missed,” not one of them condemns the TT. If anything, they celebrate it as the high point, which it was, of every life thus recalled.

I don’t want Steve polishing my memorial here either. But I can not think of any place I’d rather have one.

This chapter was excerpted from “Riding Man,” Mark Gardiner’s account of tackling the Isle of Man TT. Ten years ago, Mark quit his job, sold everything he owned and moved to the Isle of Man to see if a completely ordinary motorcyclist could qualify for the TT. He did, and a few year’s later, Mark published a memoir of those events called “Riding Man.” It has become a cult book among motorcyclists, selling without any advertising or store presence. The first edition of the book is on the verge of selling out, but the last few signed and inscribed copies are available at RidingMan.com. Mark says to expect an eBook version of “Riding Man” early in the new year.