Dave Schuler on winning Catalina in 1958 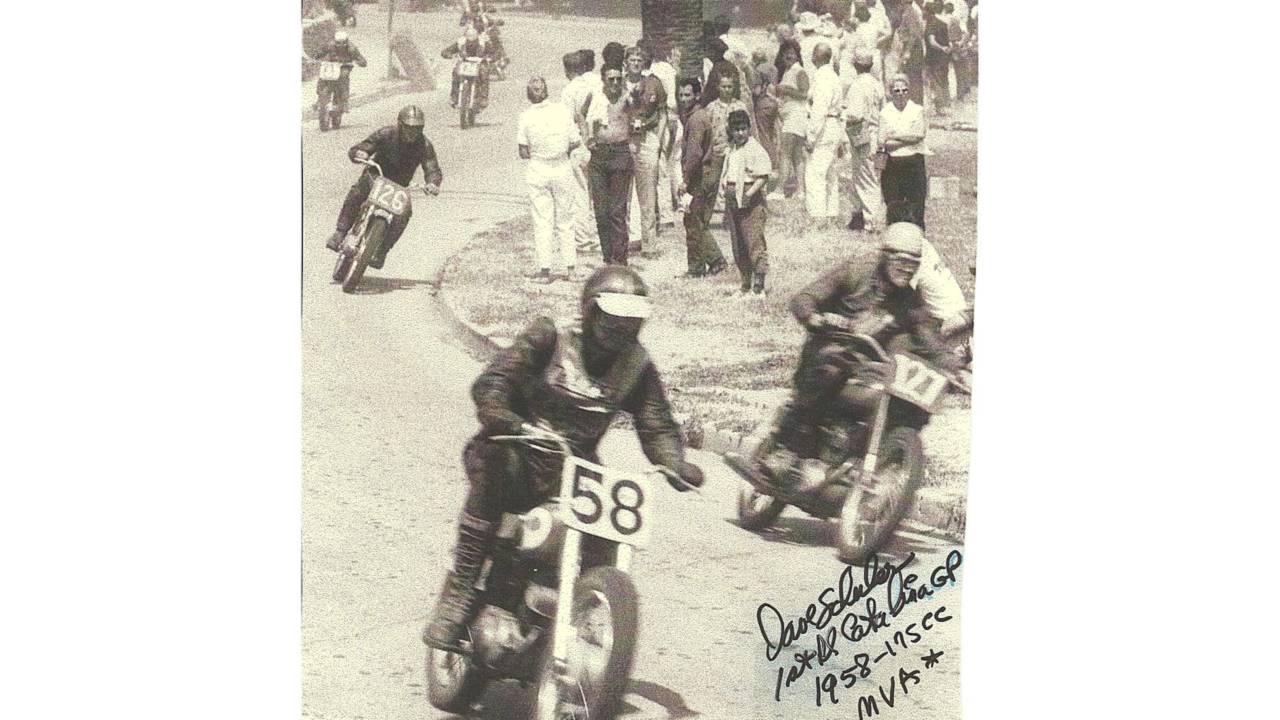 “I got the holeshot, then as I was coming down the first lap I hit a tree on the golf course because the dust was so thick. So I got up, tweaked my forks back and bent my numberplate back. It didn’t hurt me, so off I went and I ended up coming from way back to winning by a minute and forty seconds. That was my day.” In 1958, Dave Schuler won the lightweight class at the Catalina Grand Prix o...

“I got the holeshot, then as I was coming down the first lap I hit a tree on the golf course because the dust was so thick. So I got up, tweaked my forks back and bent my numberplate back. It didn’t hurt me, so off I went and I ended up coming from way back to winning by a minute and forty seconds. That was my day.” In 1958, Dave Schuler won the lightweight class at the Catalina Grand Prix on an MV Agusta. Today, he told us his story.

In the top photo, Dave is #127, pictured just about to overtake the 1958 race's leader for first place.

“It was much, much different this year,” said Dave, who attended this weekend’s race as a spectator. “These people are all desert people and they partied, but they don’t go round raping people and kicking ass like the Hell’s Angels do.”

“The people on the boat going back, that run the boat, the captains or whatever they are, they said this was the most nicecrowd that they’d ever seen in their history. I didn’t see nobody get into one argument all four days. We knew that if we wanted to come back, which we do that we’d have to put on a good show, which we did.”

“There’s was not one Hell’s Angels on the island that I seen. That’s what we were worried about. us racers are bad enough, we don’t need them other guys to help us.”

“The Hell’s Angels and The Sharks and the Galloping Gooses and them guys. The Mongols. They just didn’t come this year and I’m glad they didn’t.”

Dave's on the right, his brother-in-law Lyle is in the middle.

“I was in the army from ’53 to ’55 and when I come out, I bought a new AJS and raced that for a couple of years. BSA made the Catalina Scrambler, more or less a race bike made to fit that island. They sent it over to Joe Koon’s BSA in ’56. They wanted Mick Mickelson to ride it at Catalina, but he had got a deal to go to the Isle Of Man on a Norton, so I got that back and raced it for about three years. I really loved it.”

“Catalina was unique because most of the guys that were racing it, they were racing Hare & Hounds in the desert and dirt tracks and all that, but very few of them had much experience on the pavement, so there were a bunch of guys sliding out all over the place. That was the most difficult thing to get used to, you just had to back off or gas it, whichever one was easiest for you I guess.”

“My brother-in-law, Lyle Ottele, he was running the MV for the distributor at the time, Alan D’Alo. Anyway, Lyle was going to go to Alan’s shop to put together their new Ducati. Alan had decided to give the new MV distributor to Mcaffe Motors in Pasadena, so he was trying to be the distributor to Ducati. so I went to try and help my brother-in-law put his bike together. While I was helping, I seen this MV sitting over in the corner. His mechanic owned it and he’d been road racing it quite well so I sad, ‘Hey, how about letting me ride that?’ And he said, “Sure.” The rest is history.

“They sent about four Yamahas over here and the Jap went the wrong way on the course. You don’t practice, you just go. So that caused a jam up on the outer trail and we had to have a restart.”

“He jut went and turned left instead of turning right. I had ridden the course before so I knew where to go, it was just a screwup. Then, Yamaha claimed their rider turned the fastest lap on Saturday, but he didn’t. It was a guy by the name of Don Holley riding a Triumph Cub that was much faster than anyone else. He won the 200 class. I don’t want to call them liars or nothing.”

“The 175cc MV was a streetbike, we had to take the lights off and they put a reverse cone funnel on it, which made it sound like a hundred-thousand bumblebees, and it was a dual overhead cam and it had some work done to the motor because it sure flew. All we had to do was take off the lights and stuff and put on a couple of Dunlop Trials Universals, which were good for pavement and the dirt, back then we ran about half and half. It handled just super and flew. I couldn’t been happier about the way it run.”

That's Dave in the background wearing the spiffy MV vest, Lyle's in the foreground.

“I was mainly amateur, but I did get an AMA number on year. Some of my buddies and I raced up Pike’s Peak in 1955. I burned a hole in my piston and I had to push it the last hundred yards. Well, the last hundred yards is straight up. I got about $5 for my efforts and that was the only money I ever won.”

“I been married to the same sweetie for 54 years, she’s the sister to my brother-in-law. We had four kids, twelve grandkids and three great grandkids. Both my sons ride, one still does and one grandson has a Yamaha. It’s more or less baseball with us, motorsickle racing’s in both sides of the genes. My great grandson, his grandpa Randy MacIntyre won the lightweight A class for 50 and over at this Catalina race. So he had a grandpa that won in ’58 and the grandpa on the other side that won in 2010. I think that’s pretty unique.”