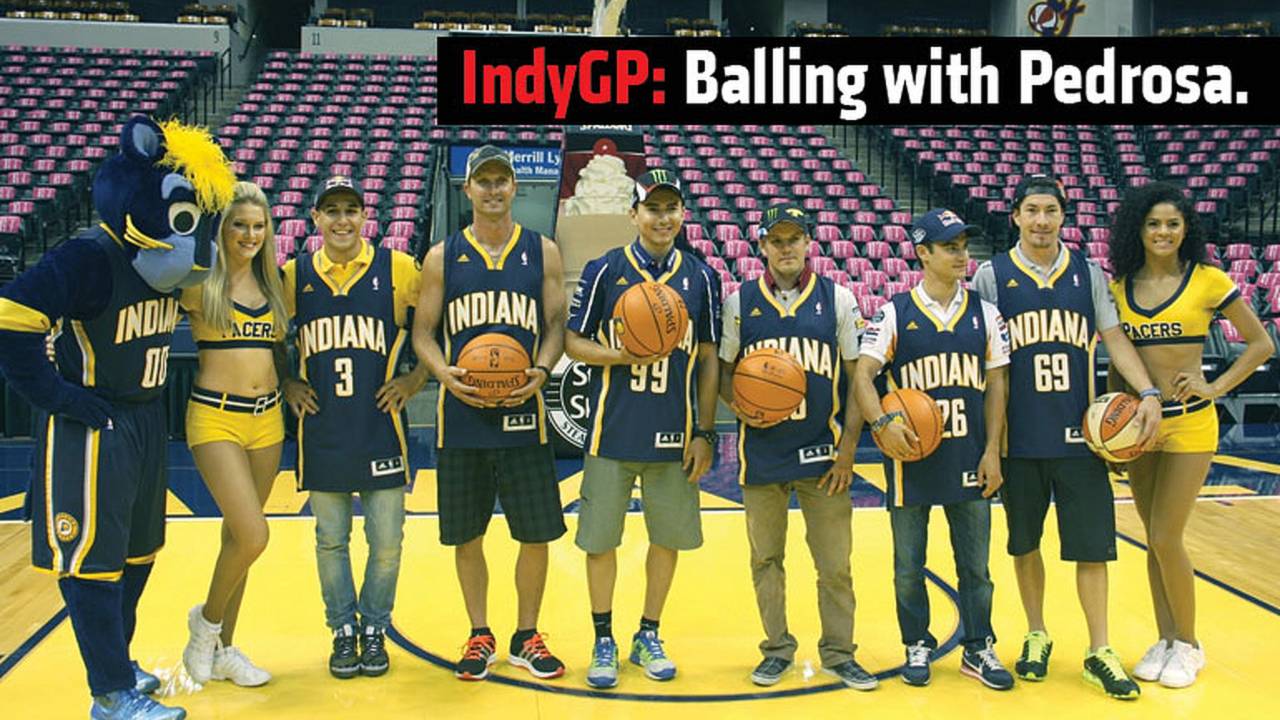 The IndyGP is here and the MotoGP boys enjoy a little pick up game before the race weekend kicks off tomorrow. And who knew Pedrosa was a secret baller?

The three-day format of a MotoGP weekend that makes it onto television screens around the world is, as one might expect, not the whole story. The GP weekend actually begins some days before, and official actions start on Thursday.

There are various press events, teams setting up garages and assembling bikes, track inspections by officials and riders. Much of this routine follows very closely to the script, like the carefully worded statements given by riders at the opening press conference on Thursday. Some of it is ad-libbed, like the 3-on-3 basketball game at Bankers Life Fieldhouse.

The surprising part of that experience? Dani Pedrosa is a scrappy little baller. No, really!

The feeling in the paddock and among the riders on Thursday is relaxed, even more so this weekend owing to their long summer break. Even the ever-present jet lag is reduced in severity for some of the riders, who took the chance to come over to the United States early, and put in some training on the West coast.

The chill vibe evaporates abruptly on Friday morning. The jovial atmosphere is gone when you walk through the gates in the morning, replaced by a quiet, intense energy. Crew members hustle from their hot pit to their garage and back. Journalists tap away furiously on their keyboards. Photographers buzz around (if they're lucky enough to have a scooter) to different corners, looking for the best spots to use on Saturday and Sunday.

One thing not at all sticking to the script this weekend is the weather. It rained lightly at the beginning of the first Moto3 practice, but a dry line developed as the session wore on. By the time the Moto2 and MotoGP classes took to the asphalt for their first sessions, the surface was completely dry.

Still, showers in the vicinity persist, and the overcast spits rain often enough to keep drops on the riders' visors. Even the best riders in the world can struggle with confidence in these conditions, particularly at a track that has not had a reputation for great traction in the past.

Outside the paddock itself, the atmosphere remains relaxed. The bigger crowds won't arrive at the track until Saturday and Sunday, so those spectators savvy enough to do their exploring, sightseeing and shopping on Friday are treated to short lines and unobstructed views of the track. The overcast has kept temperatures supremely comfortable, and the rain hasn't been enough to even be an annoyance -- provided you're not wrestling a 250 horsepower motorcycle around a racetrack.