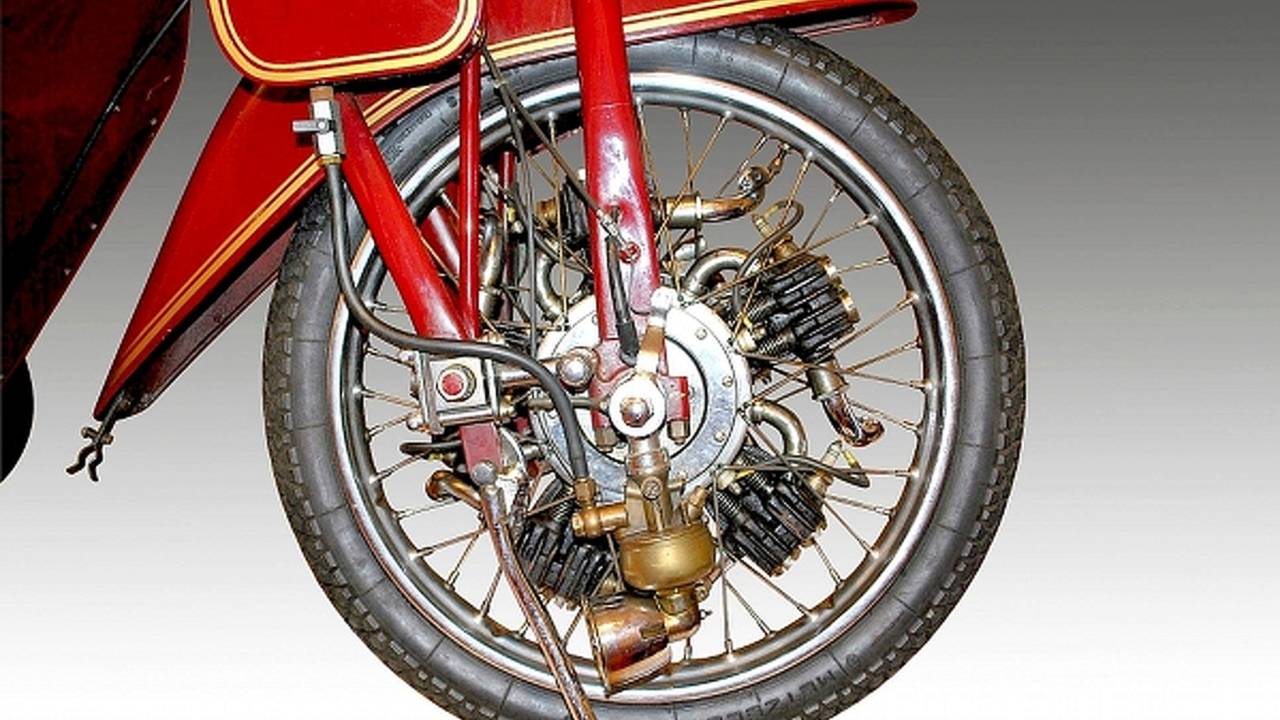 Don’t call the engine mounted to this front wheel a radial. It’s actually a rotary, just not in the Wankel sense. Instead of spinning the crankshaft, the motor itself rotates along with the wheel. There’s no clutch and no gears, but there is a five-cylinder engine similar to that of a Sopwith Camel's that’s good for 75mph. Of 2,000 ever made in 1920s Germany, the example you see here wears...

Don’t call the engine mounted to this front wheel a radial. It’s actually a rotary, just not in the Wankel sense. Instead of spinning the crankshaft, the motor itself rotates along with the wheel. There’s no clutch and no gears, but there is a five-cylinder engine similar to that of a Sopwith Camel's that’s good for 75mph. Of 2,000 ever made in 1920s Germany, the example you see here wears serial number “001.”

You can tell this is the touring model Megola because of the bucket seat. The race version used a bicycle saddle.

And they did used to race these. Because the wheel rim is laced directly to the motor housing, riders had to carry spare engine/front wheel combos in varying rim sizes to alter their gearing to suit race conditions. Important when you can’t simply shift gears or pull in the clutch and, every now and then, you need to pump gas from the main tank to the fork-mounted pre-tank by hand. “Sport” versions made 25bhp and could reach 85mph.

As you can imagine, fueling a wheel-mounted engine presents some unique difficulties. Not only are the cylinders in an odd location, but they spin with the wheel. The main tank is housed in the hollow pressed-steel monocoque frame (apparently a favorite among smugglers moving rationed supplies illegally) and both that pre-tank and the oil reservoir are mounted on the sides of the forks. Both tanks feed the engine via gravity and the lubrication system is total loss. Can you imagine the fling that must have come off that engine at 6,800rpm?

Other problems arose with starting. Without any means to disconnect the engine from the driven wheel, since the engine is the driven wheel, Megola riders had to either push start the bike and risk unpredictable acceleration as they struggled to climb aboard, or mount the front wheel on a stand and spin it by hand.

Front-wheel drive also raised interesting handling issues. Modern reports indicate the presence of torque-steer, which owners of powerful front-wheel drive cars will be familiar with. While accelerating, the torque effect pulls the bike strongly to the left.

So why build such a contraption? That video above likely offers the best answer. In post WWI Germany there were a bunch of aircraft engineers who weren’t just suddenly out of work, but not allowed to build aircraft either thanks to the Treaty of Versailles. Idle hands...

“Megola” is a portmanteau created by combining the first two letters of the last name of the bike’s three creators: Hans Meixner, Fritz Cockerell and Otto Landgraf. Cockerall allegedly went by the alias Friedreich Gockerell, which sounds pretty shady and lends Megola the ‘G’ and ‘O.’

Cockerell, Gockerell, whatever, originally designed the bike with its engine mounted on the rear wheel, which makes slightly more sense. By the time his two partners entered the picture and his concept was productionized, the motor had grown from three to five cylinders and move to the front. The advantages of this were apparently obvious. Can you think of a better location for an air-cooled rotary engine? Just like on a plane, it’s at the point of highest pressure.

Mounting the engine on the front wheel created one other huge weakness though. The huge addition to unsprung weight overtaxed the single, tiny leaf spring that formed the front suspension and they were known to break.

This particular model, being auctioned by Bonhams on February 5 in Paris, was completely restored in 1990 and reportedly runs. The auction house expects it to fetch €145,000-200,000.

Megola was forced to cancel its rotary-engined motorcycle in 1925 as the German economy suffered runaway inflation and luxury motorcycles like this one were replaced with a simple, utilitarian 175cc standard.

During that pre-WWII period, Cockerell also designed a liquid-cooled, transverse, inline-four engined motorcycle. That would never have caught on.