Throwing The One Motorcycle Show

Thor Drake runs See See Cycles and organized Portland’s The One Motorcycle Show on Saturday. We asked him to tell us a little about what happened. By our count, there were 78 custom and classic bikes on display, 14 burnouts, 80 cases of PBR, 3,000 people and one visit from the cops. — Ed. Photos: Austin Porter and Thor Drake Holy shit I’m beat. Thursday: we gain access to the building w...

Thor Drake runs See See Cycles and organized Portland’s The One Motorcycle Show on Saturday. We asked him to tell us a little about what happened. By our count, there were 78 custom and classic bikes on display, 14 burnouts, 80 cases of PBR, 3,000 people and one visit from the cops. — Ed.

Thursday: we gain access to the building while the building is still being renovated. For some reason I decided every bike in the show needed a white box bike stand. As we were building the bike stands the electrician sorting out 75 years of shitty electrical work grabs a hold of a live wire. He happened to be on a ladder directly above a friend who was helping build the boxes. I guess he got pretty fried because he fell off the the ladder on to his side. The electrician was shaken up but OK, a huge down side was that he never came back. So I'm thinking, ‘Great, this building could go up in flames any minute due to shoddy electrical work.’

Friday: we finished all the boxes and started to clean up all the construction material left behind from the renovation that was still happening upstairs. I’m stressing pretty bad because it doesn't seem that the building renovators will be finishing anytime soon. We left Friday night around 2:00 am. We had most of the art hung and a good portion of the down stairs ready to go.

Saturday morning: the day of the show came pretty quick. A good friend Greg Schmitt loaned us the building next door, which happened to have a seamless photo wall. Another good friend, Ray Gordon, took amazing photos of all the bikes and builders/ owners in the show for the next book.

Getting the 78 bikes up the 12-foot ramp with a four-foot rise to the photo studio proved to be doable but sketchy. Especially for a twin-engine xs650 drag bike or the 8-foot raked out knuckle head.

I was basically running back and forth between the photo studio and the show coordinating 15 helpers, artists, renovators and people asking all kinds of crazy questions. At one point I was moving a 1975 Rick Palmaroy-signed replica Bultaco down the ramp and got my pant leg hooked on the edge of the ramp, I almost went down pretty hard, but pulled it together. After all the bikes where photographed we had to move them up another ramp through an indoor softball training facility into our space,(I know this doesn't make any sense, I think all parties where confused by it too. The thick-thighed gals winging softballs faster than most of the bikes could go, the builders entering into a ubiquitously painted green room with fake grass going to a motorcycle show...) Once in our space I had to move most of the bikes upstairs by an elevator powered by get this, a water pump and water!!! Sketchy. Someone asked if there was any rhyme or reason to where I put the bikes in the show, I replied, ‘There is but I'm not sure I could ever explain verbally how and why.’

Thanks to the Sang Froid Riding Club and a few friends for helping me with the man power to transform a raw space into what I overheard during the show as the "Guggenheim of motorcycles." It was crazy how much got done in the 8 hour span. I remember looking at my clock thinking its 4:49 and we are ready to open the door for biz. 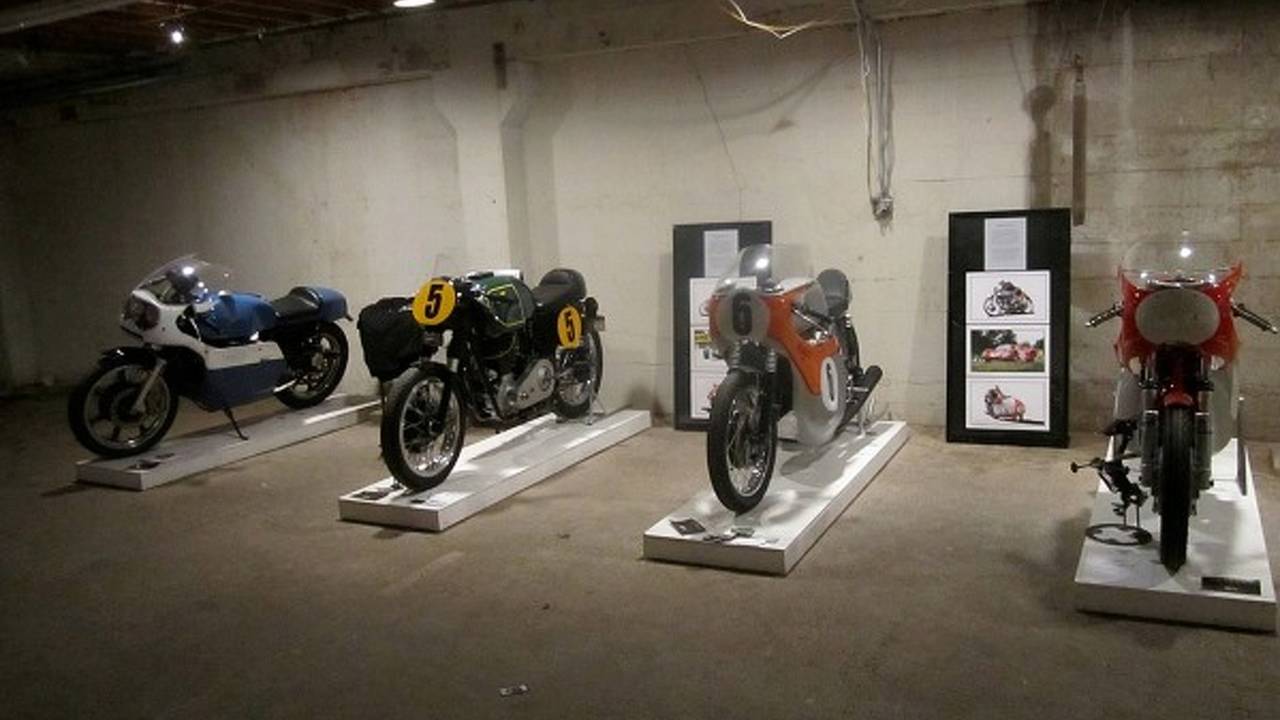 The show: no joke from about 5:00 to 9:00 it was a steady stream of people entering the building. I think in the first hour we had 1,400 people enter. During this time I got to finally take 15 minutes to close my eyes and take a deep breath.

9:00 we ran out of beer, I know the motorcycle crowd likes to enjoy tasty cold beverages but 60 cases of PBR in 4 hours seemed like a lot. Also at 9:00 the first smokey burnout was laid down which in my mind seemed a little early. The problem with smokey burnouts is they inspire more smokey burnouts. 13 total, two of which happened on the brand new floors in part of the building by an unruly ct70. Oh wait 14, one in the bathroom. Thank you very little Hell For Leather.

I am proud to have what I think may be the first, that I have seen, front wheel burnout. A 1967 triumph bobber did a 30 foot long front wheel burnout. After talking with the pilot of said bike, "You should have told me my back tire wasn't spinning, I just saw the black streak and assumed I was burning out." Nope your front tire was locked up my friend.

We got more beer and started our story telling contest. Six contestants would take the stage and give us their best two wheeled story.

The first, Patrick Layshock, described his evolution of the motorcycle wave, turning it from a standard wave, to a fist pumping version of your motor layout. V-twin double fist, thumper single fist etc...

My story was next, I explained that having moths flying in your ear sucks. It does.

The fitting winner was a gentleman who gave us a picture supported story of the DT-1 on all the posters we made for the show. It was pretty cool.

After the story telling contest I was called off to get 20 more cases of PBR which lasted to about 10:00.

Around 11:30 Johnny Law waltzed in and I nervously asked them if I could help. They said, "We just wanted to check out the bikes, are these all yours?" I replied no and told them they came from private collectors. Just as a mini bike fired up and started a smokey burnout upstairs. Needless to say the cops where pretty surprised to hear that. They said “nice show” and left. 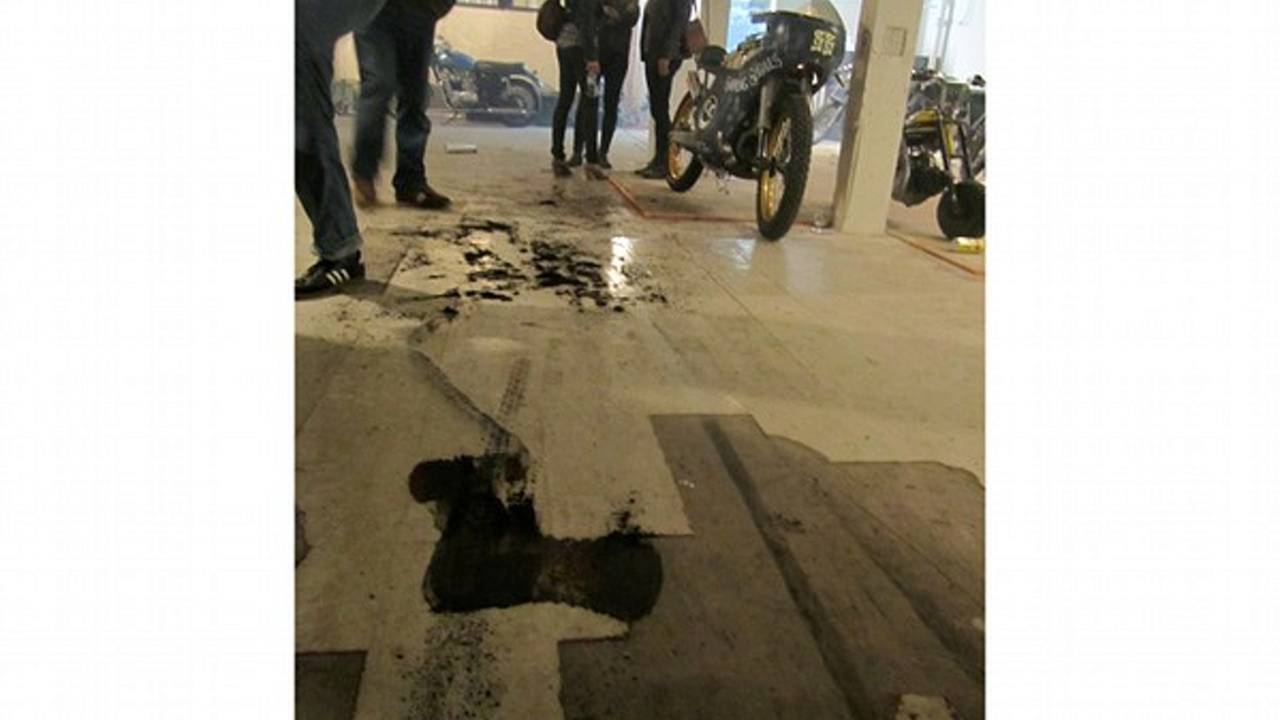 The rest of the show was pretty mellow. A few more smokey burnouts, a very impressive one by Drake McElroy on his cr250 two-stroke. it sounded like a chain-saw cutting timbers down with a dull chain.

The show finished up around 1:00 with just a few lurkers having to be booted out. This was the best time to have a look at all the bikes. Despite being completely exhausted I stayed up for the next 3 hours having a few brews and enjoying each bike thoroughly.

All ‘n all the show was a huge success. I had so many builders and random people say they had a great time and it was an inspiring show. That to me makes it all worth it, I want to provide something that is for people who love motorcycles — around 3000+ over the span of the show.

The One Motorcycle Show