How to gear up for adventure

While the idea of heading off into the wilderness on a bike armed with nothing more than a knife, blanket roll and a can of beans may seem awfully romantic, the truth is that’s a good recipe for getting stranded or never coming back. Best case scenario? You’ll simply be miserable. Instead, building a comprehensive adventure touring kit can make things easy, comfortable and safe. There’s no w...

While the idea of heading off into the wilderness on a bike armed with nothing more than a knife, blanket roll and a can of beans may seem awfully romantic, the truth is that’s a good recipe for getting stranded or never coming back. Best case scenario? You’ll simply be miserable. Instead, building a comprehensive adventure touring kit can make things easy, comfortable and safe. There’s no way we can cover every single bit in one article, but let’s use my expedition into the Sierra Nevada on board a KTM 990 Adventure as an example. These are the basic pieces needed to get you off the road and back again.

These soft bags are a godsend for budget and ultra-lightweight traveling. Total capacity is an enormous 47-liters and there’s plenty of pockets and organizers for maps, tools and all the various nicknacks you’ll end up carrying. With straps designed to run over or under a seat, they can be adjusted to fit a huge variety of bikes and are completely waterproof thanks to a roll-top closure and heavy duty, rubberized construction. They shrugged off my little spill on the KTM without so much as a scuff.

Compared to metal panniers, these Ortliebs weigh next to nothing and disconnect in just seconds. Smartly placed handles make carrying them around off the bike easy too. The best part? The M22s only cost $204. 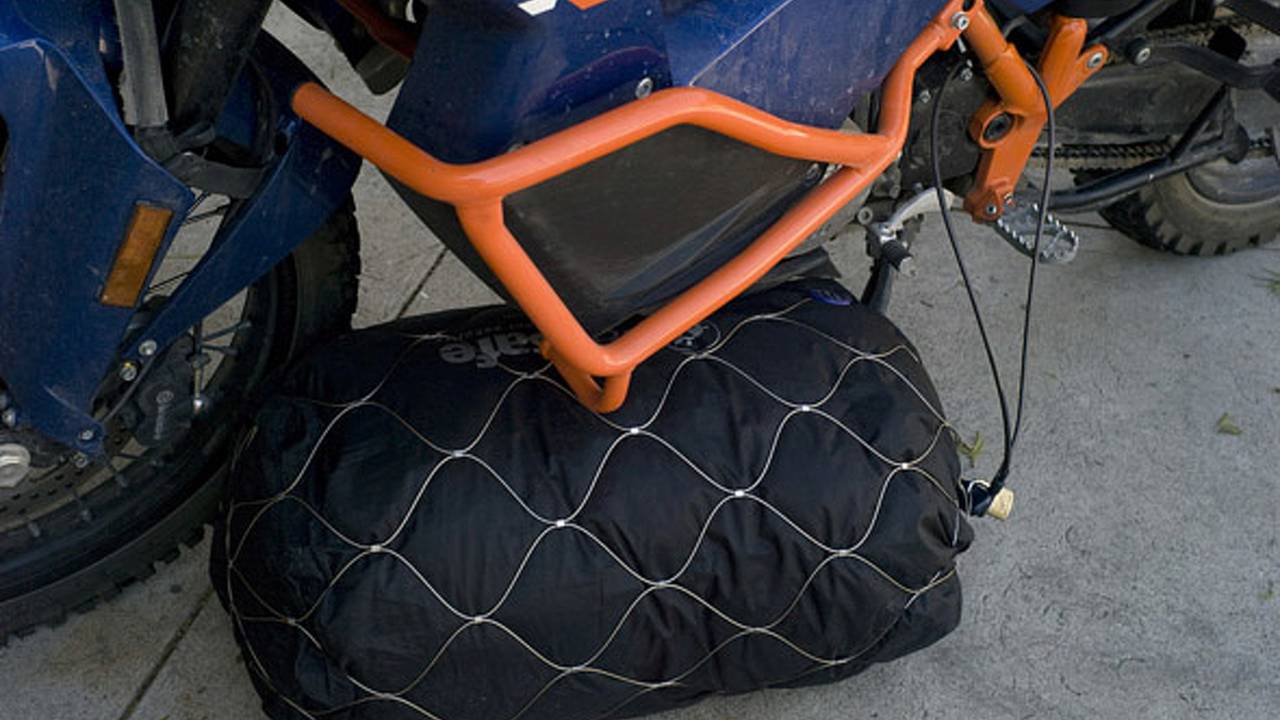 At first glance, this $90 duffle bag and its wire exterior might seem unnecessary. That’s until you confidently leave the bike parked out of sight at a truck stop or sleep safe in a shared campsite, knowing whatever’s inside would be a real bitch for someone to steal.

The slash-proof bag uses a roll-closure top for waterproofness, so I use it as a carry-all for my food, sleeping bag and clothes. Once camp is set up, I dump all the contents inside the tent and then repack it with my riding gear and lock it to the bike. It’s nice knowing my gear’s still going to be there while I’m off hiking or hunting. If I don’t need its capacity, the bag cinches down to almost no size or weight, meaning it’s easy to cart around on the off chance I may need some extra room. 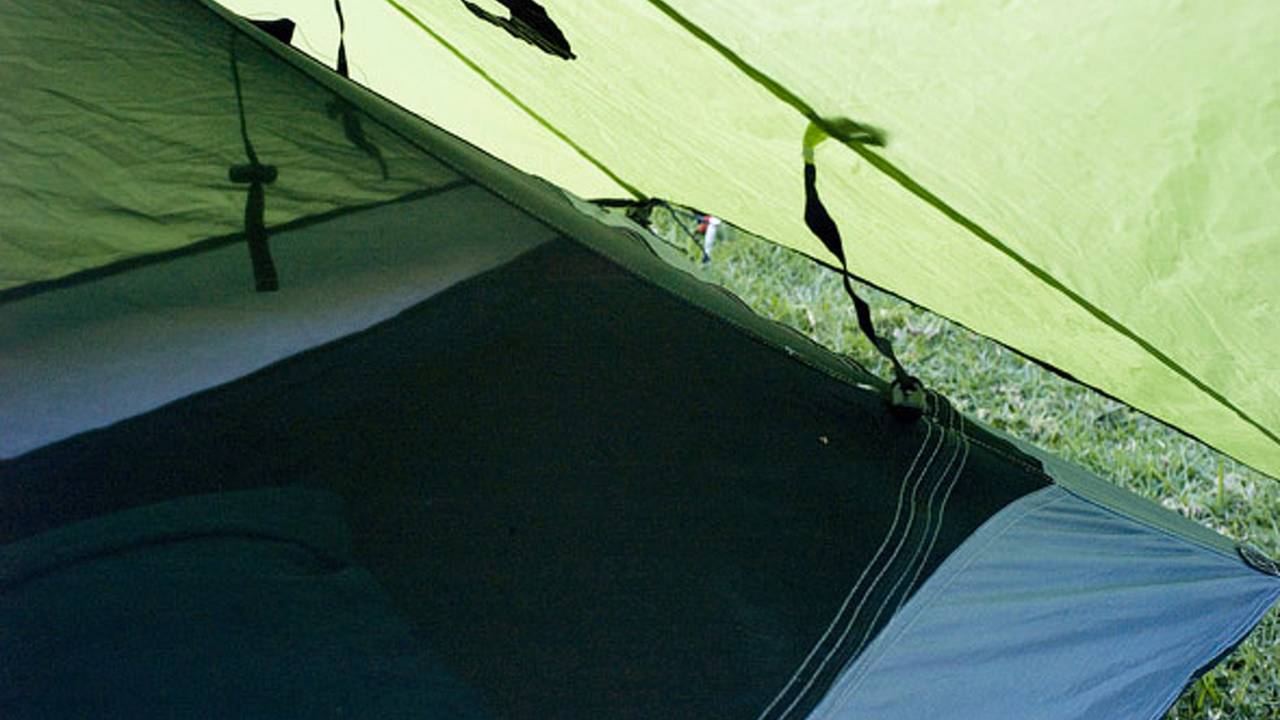 At just 2.8lbs and small enough to fit inside a helmet, the Nemo Moto has the makings for the ultimate motorcycle travel tent. It’s very well made and goes up in just minutes thanks to the design’s inflatable beam in place of metal poles. Slightly larger than a bivvy, there’s 27 square feet of interior room, which is plenty for one person and a bag or two.

But, at $350, there’s no excuse for the lack of zipped wind flap over the mesh screen door. Keeping wind out is crucial in anything but the warmest conditions. Instead, the vestibule leaves up to a foot-wide gap between itself and the mesh, letting wind pour through the tent all night. It doesn’t matter which way you face it either, the wind still gets in. A perfect recipe for pneumonia. That means the Nemo Moto is staying in my garage until summer and I’m left hauling around my bulky two-man Walrus. 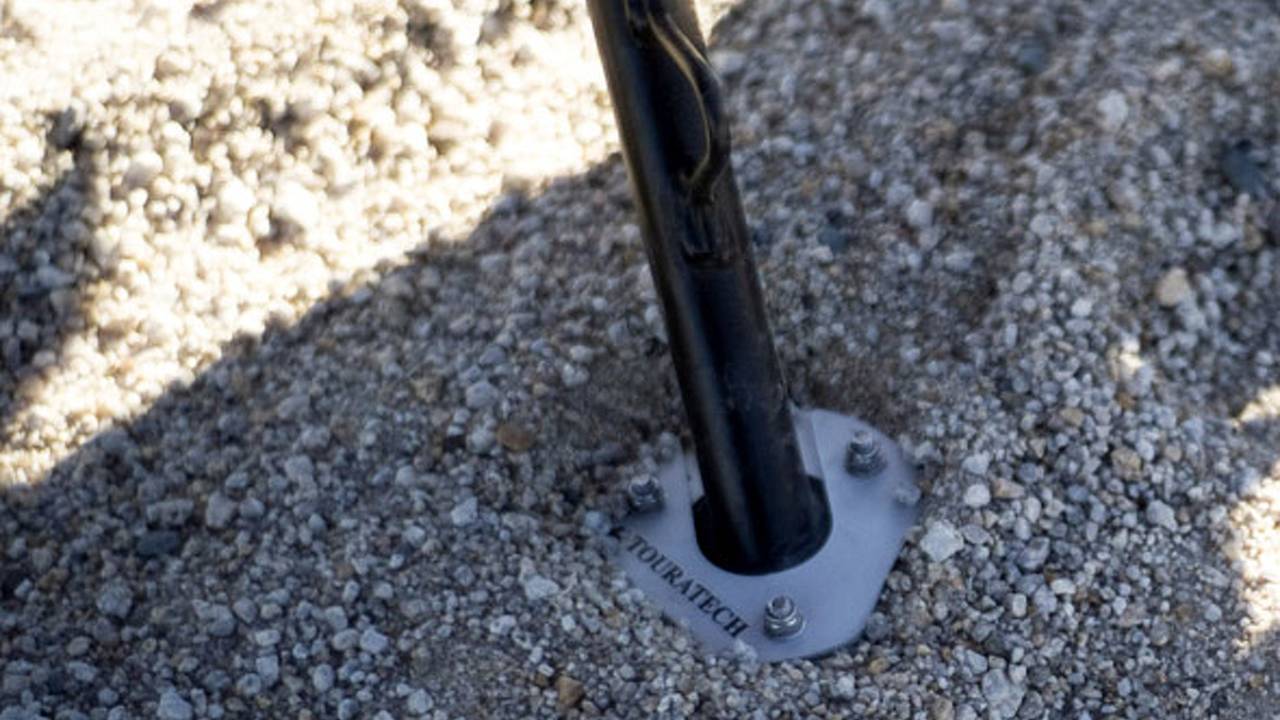 I used to think little doodads like this were just an easy way to shake some more change out of the Starbucks adventure set. Nope. Turns out, the sidestand foot is probably the single most important aftermarket piece of equipment on the 990. Even more important than crash bars. It’s $35 and any trip that leads off the highway and onto surfaces of various sloped angles, soft sand, dirt, moss or rock requires one if the bike is to stay upright while parked. 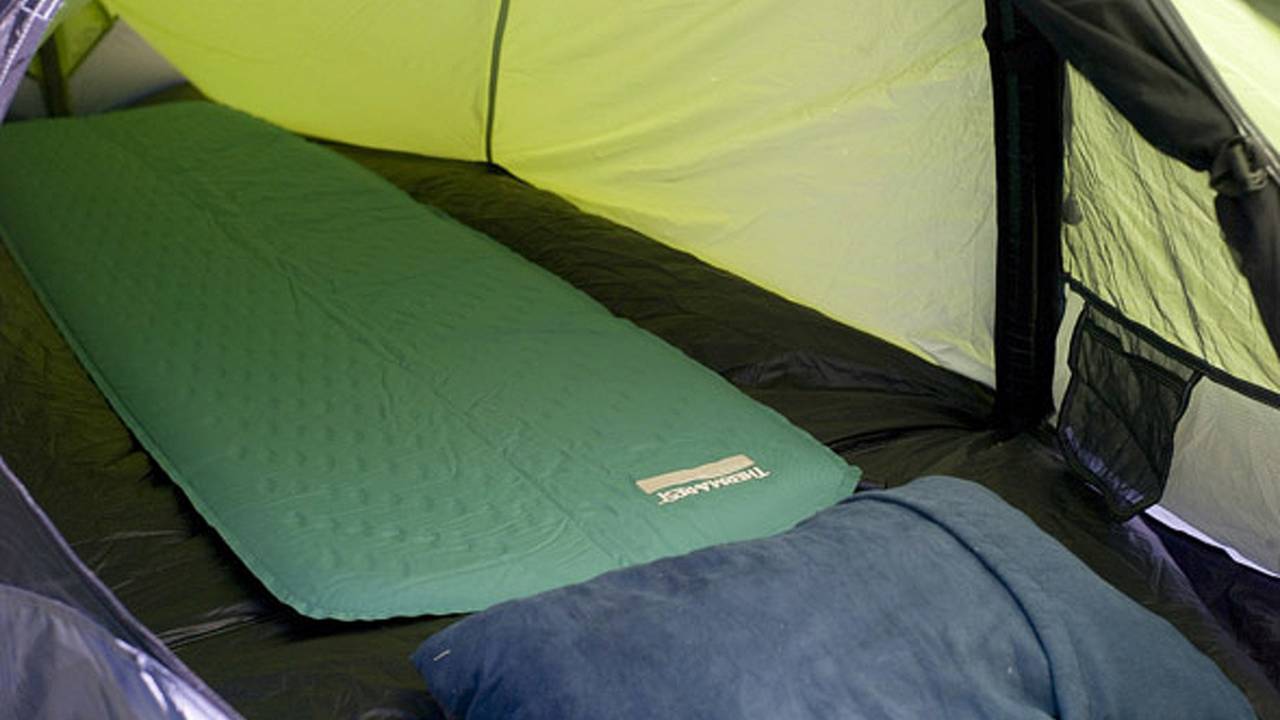 Luxury? Some would say so. But this little $40 pillow is the reason I didn’t get sick up in the Sierras as the night winds were tearing through the Nemo Moto. It filled the gap in my sleeping bag’s hood, sealing out the wind. Nearly weightless at 5.6oz, it doesn’t take up much room when compressed either. I’ll never camp without it again.

I met Justin Bradshaw from Butler at the Long Beach IMS, leaving with this collection of seven waterproof maps to try out. What makes them unique? A tiered ranking of the best riding roads in the US. I put a couple of their “G1” routes into Google Earth and that’s how my trip was born.

According to Butler, “G1” means on the best riding roads on earth. While all of the G1 roads via the Eastern Sierras were closed for winter, I still managed to ride over quite a bit of the Highway 168's G2-rated sections into the Ancient Bristlecone Pine Forest, one of the most amazing landscapes I’ve ever seen. Individual maps are $15 and packaged sets go up from there. For more devoted off-road types, Butler just put out a new map and DVD with a fantastic backcountry route across the entire state of Utah, from Arizona to Idaho, strictly via dirt. I’m already scheming ways to get enough time off work. 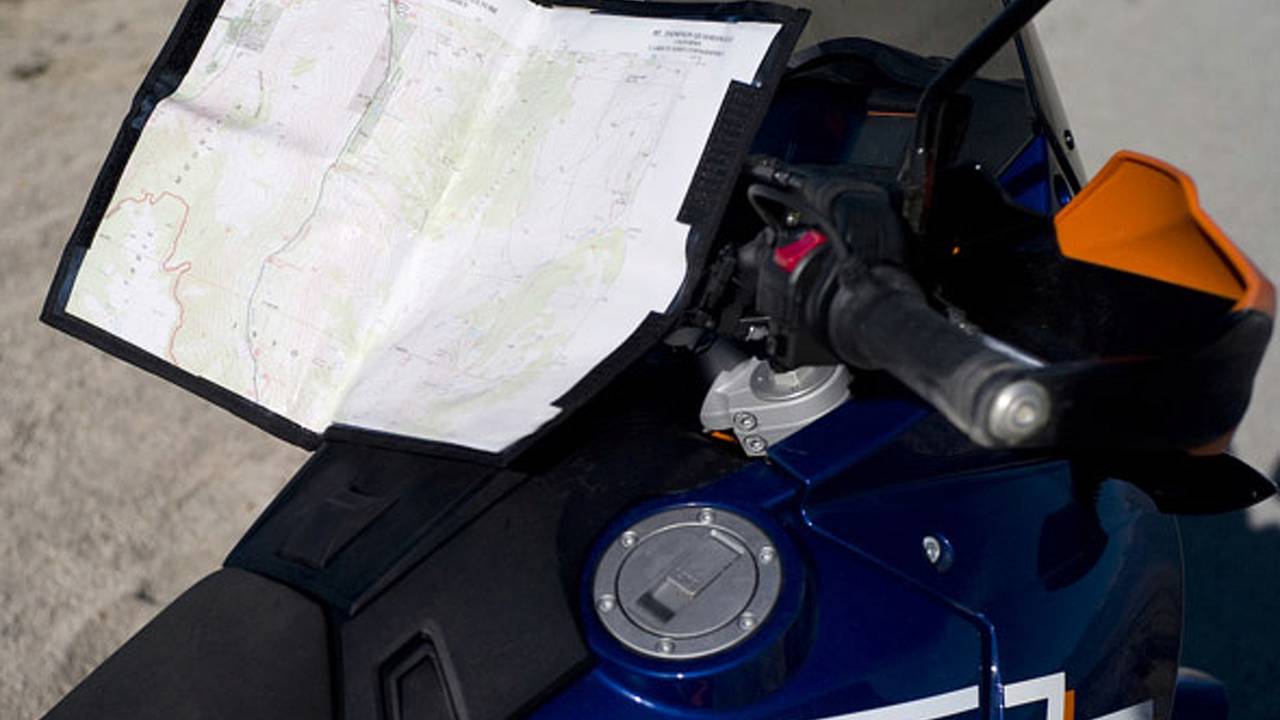 This is another one of those cheap ($36), but incredibly useful items. Hanging off any bike’s handlebars, not only is there a 6x9” map window on top and pockets for things like a cell phone, earplugs, zip ties, lip balm, cash and whatnot inside, but it also unfolds to four times the size, displaying a full six panels of a National Forest map. Two clips disconnect the BarPack from the handlebars, so taking it inside a diner for some mid-ride studying is as easy as pulling the key out of the ignition. 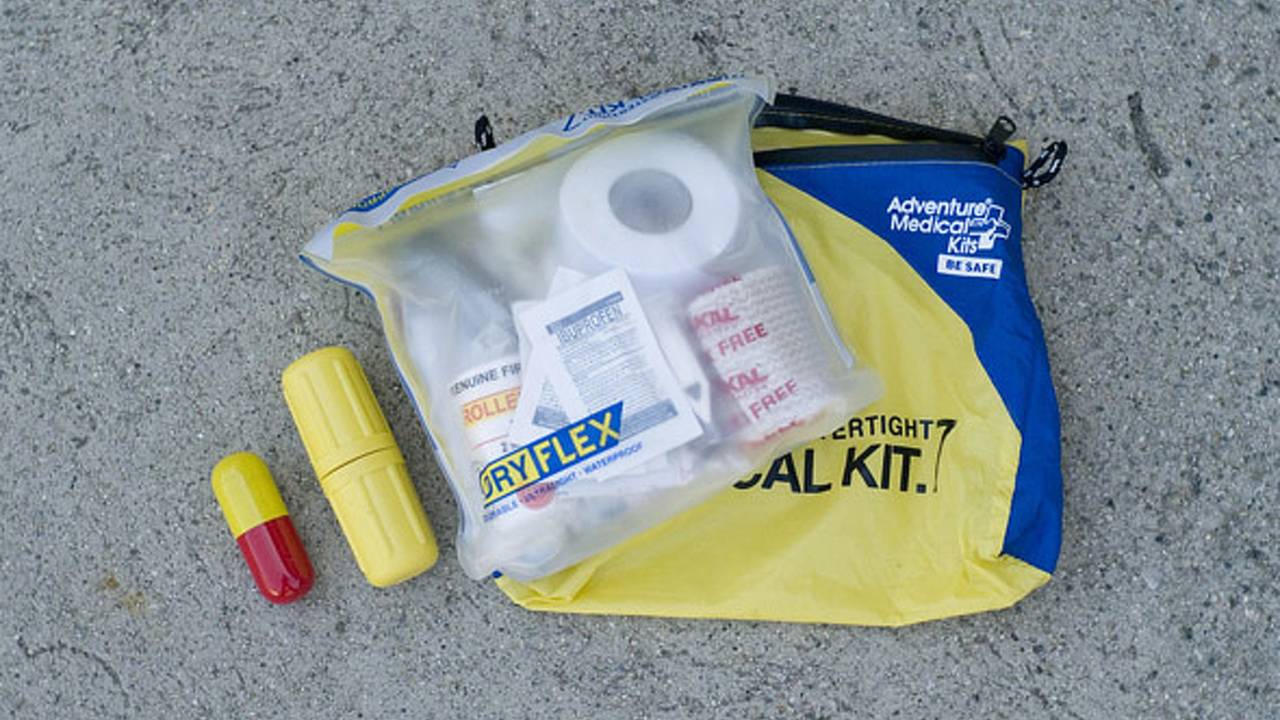 Basic and inexpensive ($26), this kit is just enough to accompany a careful adventurer. I added some extra Ibuprofen and a snakebite kit, making this just enough to keep me comfortable hours away from cell reception and first responders.

The basic adventure kit in one fell swoop. Or, how to Touratech the right way. 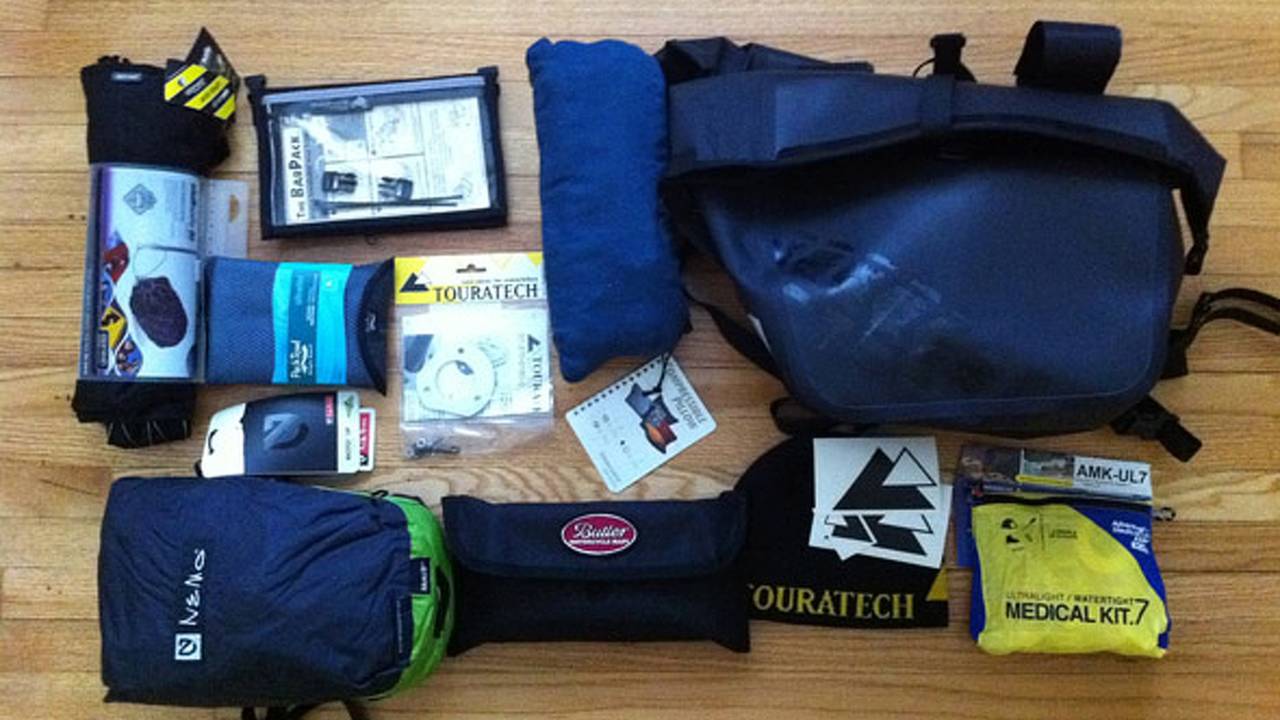 Touratech is mostly known for flashy, bomb-proof metal panniers and crash protectors that work great, but cost a fortune. You’ve seen their $1,183 Zega metal panniers parked outside a local Starbucks. But, dig deeper into the catalogue and you’ll find an outlet intended to fulfill the comprehensive needs of an outdoor lifestyle spent on motorcycles, even for those on a budget. This entire kit adds up to around $800.

Still sound expensive? Well, with a tent, waterproof panniers, ultralight pillow and towel, med kit, theft-proof duffel, maps full of riding routes, the ability to read those maps on the go and the ability to park the bike securely off-road, that $800 essentially buys you the ability to have adventures. Since the 990 already has a great tool kit and I’ve fitted Dunlop Rally Raids, there really isn’t much more needed beyond a couple bungee cords and a can of Fix-A-Flat to get riding and into the outdoors.