The next great Honda in action

At lunch on Saturday, Sean said he couldn’t understand why I was being so positive about this Honda CRF250L. His argument was that it weighs over 300lbs and makes only 23bhp. Therefore we should dismiss it as irrelevant; it just won’t be capable off-road. My argument in return? CBR250R. If Honda can bring that kinda quality and that mix of performance to a dual sport, at the same price point, ...

At lunch on Saturday, Sean said he couldn’t understand why I was being so positive about this Honda CRF250L. His argument was that it weighs over 300lbs and makes only 23bhp. Therefore we should dismiss it as irrelevant; it just won’t be capable off-road. My argument in return? CBR250R. If Honda can bring that kinda quality and that mix of performance to a dual sport, at the same price point, then this is going to be a great bike. Now with more detailed photos and action videos, it looks like that’s exactly what’s happening.

http://www.youtube.com/watch?v=sTPpweuz3EgBy international trade agreement, rock this cheesy can only be used on motorcycles destined for American shores.

Couple quick points that we should get out of the way:

1. Ever on-message American Honda won’t comment on future models, so there’s no firm commitment that they’ll import it to the US. But, the bike is equipped with a spark arrestor, indicating it was built with this market in mind.

3. That CBR isn’t utterly fantastic because of an on-paper performance number, it’s a complete, holistic package of quality components and clever solutions that combine to create a motorcycle that’s at once intuitively easy for a beginner, yet also totally enjoyable for an experienced rider. Sean likes it as much as Ashlee as much as me as much as Michael Uhlarik, as much as Sean MacDonald, as much as everyone we know who’s ridden it.

It’s those last two points that add up to my excitement for the bike. If Honda can pull another CBR250 in a dual-sport, then this thing’s going to be awesome. No, it’s not going to be the fastest or best handling or most capable dirt bike ever, but signs point to it being an astounding mix of accessible price, accessible performance, broad capabilities and an applicability to a wide range of riders and a wider range of terrain. The CBR250 is a blast on mountain roads, is totally comfortable on highways, rules on city streets and can even manage a trackday. The CRF should be a blast on fire-roads, be a great city commuter and will even manage highways.

Let’s address the immediate problems that Sean identified: weight and power. The CBR250R weighs 317lbs because it uses a simple, strong steel double-cradle frame. Making a bike that needs to be equally applicable to commuters in Southeast Asia as it does to leisure rides in SoCal, all at that incredibly affordable price, rules out the use of lightweight aluminum. The factory in Thailand, which also makes the CBR, is already tooled to produce steel frames. A little more weight equals a little less cost and increased ruggedness over years of ownership in parts of the world where bikes are actually repaired instead of replaced. Weight is also added by that ginormous exhaust can. Blame politicians around the world who like polar bears and votes more than they do hacking up particulates and loud bikes. This needs to be a road-legal motorcycle in a lot of places for a long model life.

Then there’s the power. You’d have thought Sean would have known better, since he finds the CBR’s engine to be so much more useful than the more-powerful Ninja 250’s. The CRF uses the same motor, albeit detuned from 27 to 23bhp in the name of more low-down torque. The CBR’s liquid-cooled, DOHC 250 is already extremely flexible for such a small motor, the CRF’s should be even more so, at the expense of some top end. Again, there’s also cost. The 31bhp Yamaha WR250R costs $6,590 for a reason.

Despite all that, the CRF still weighs less than the CBR. 317 vs 357lbs (wet). I’ve never heard anyone call the CBR heavy. 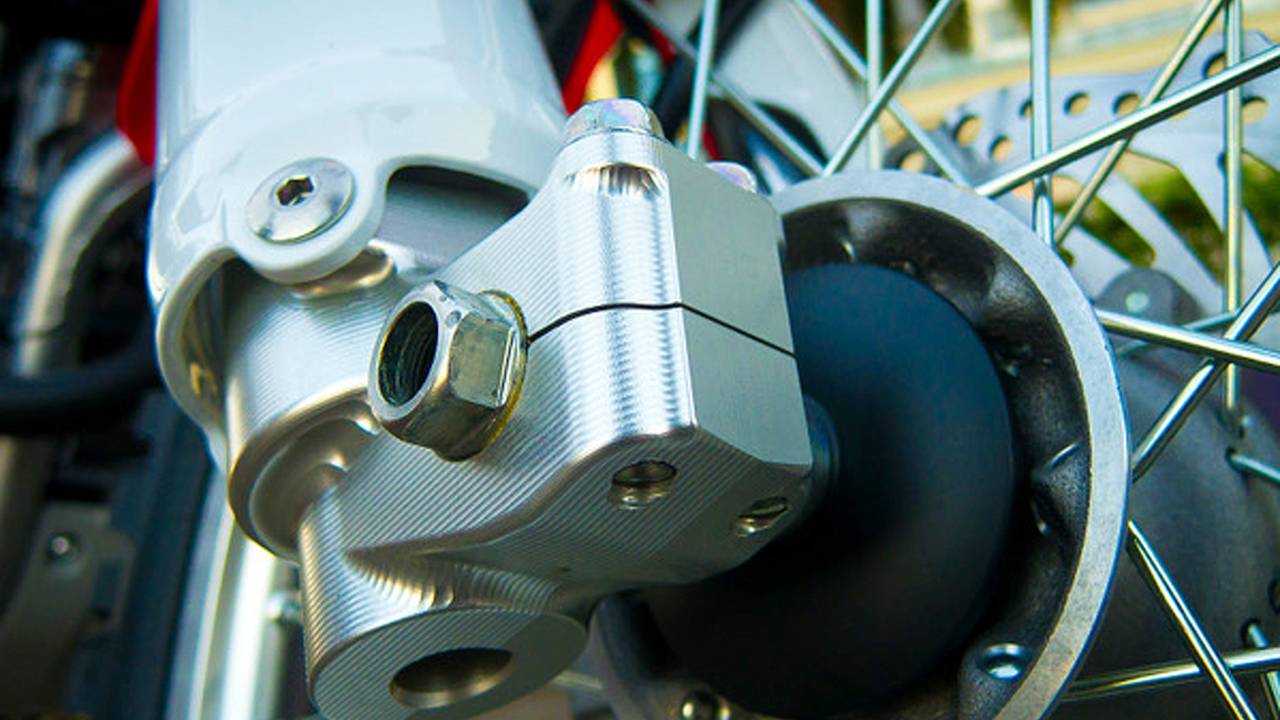 I hope this doesn’t sound like Honda has cut corners because, by all appearances, they totally haven’t. A monoblock-cast aluminum swingarm looks the part and should help reduce unsprung weight along with the aluminum rims. The rear shock is a Pro-Link design and front-suspension is by 43mm (ie big and chunky) USD Showas. Both front and rear discs are wavy and the four-piston front caliper appears similar to the effective item used by the CBR. Clocks are digital, there’s plenty of practical features like tie-down points and lockable tool storage and fancy stuff like a digital dash too. Uniquely, there’s 45 degrees of steering lock in each direction, which is part of what should make this lightweight, simple motorcycle so easy to use on city streets and tight trails alike.