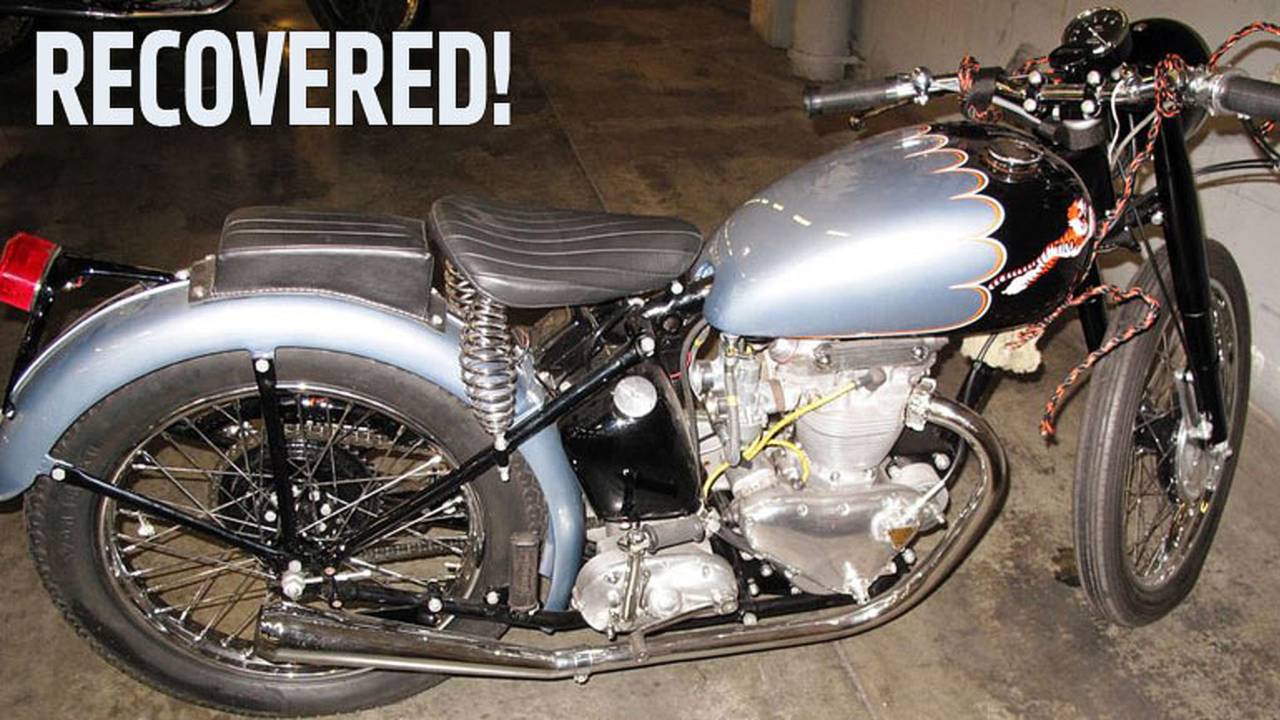 Getting your motorcycle stolen sucks. The chances of ever seeing it again are pretty slim. So imagine the surprise of a Nebraska man who had his 1953 Triumph Tiger T100 stolen 46 years ago only to have it recovered and returned to him last weekend.

The bike’s owner, a former police officer, last saw the black and blue Triumph when it was parked in the rear yard of his Omaha home on February 4 or 5 1967.

According to police reports at the time, the bike was valued at $300 but was not insured. It had been laid up for the winter and was parked in the yard but a gate on the wooden fence had been forced.

During a routine check by customs authorities at the Port of L.A. in Long Beach last week, the Triumph was discovered among a shipment consignment to Yokohama, Japan. A check on the bike’s VIN number revealed that it had been stolen from Nebraska in 1967. Where it had been all that time and what condition it was in when it was found was not reported.

“This is one of three vehicles CBP recently intercepted that were stolen at least 20 years ago. CBP officers and their law enforcement counterparts check many outbound vehicles on a regular basis. Their success in recovering stolen vehicles is remarkable. A few have nice stories like this one," said to Todd C.Owen, Field Director of the U.S. Customs & Border Protection.

The Triumph Tiger T100 was returned to its Nebraska owner over the weekend. CBP did not say if he was still riding or what he intends to do with his recovered Triumph, which was valued today at around $9,000.

The T100 was quite a special bike in its day. After WWII, Triumph decided to return to motorcycle racing in the early 1950’s with a limited program using the Tiger 650cc as a Grand Prix bike. At the time you could build your own race version with a box of modified parts that the factory would supply directly to you. These consisted of a closed fin cylinder head, dual Amal 276 carburetors, and 9:1 pistons, and a special exhaust system. There was no rear suspension, as the Tiger did not get a rear swingarm with shocks until the 1954 model year.

But in 1953, after pressure from Triumph’s West Coast distributor Johnson Motors of Pasadena, the Triumph factory took 100 motors off its assembly line and added the race parts specifically for the U.S. It also stamped the letter ‘C’ on the engine casing and sent them all off to the America to create the Triumph T100C Competition.

It’s hard to tell from the photographs if the former Nebraska’s police officer’s recovered Triumph is a competition version. It’s definitely a 1953 model and looks to be in good shape. But 46 years is an awfully long time to wait for the return of your motorcycle.