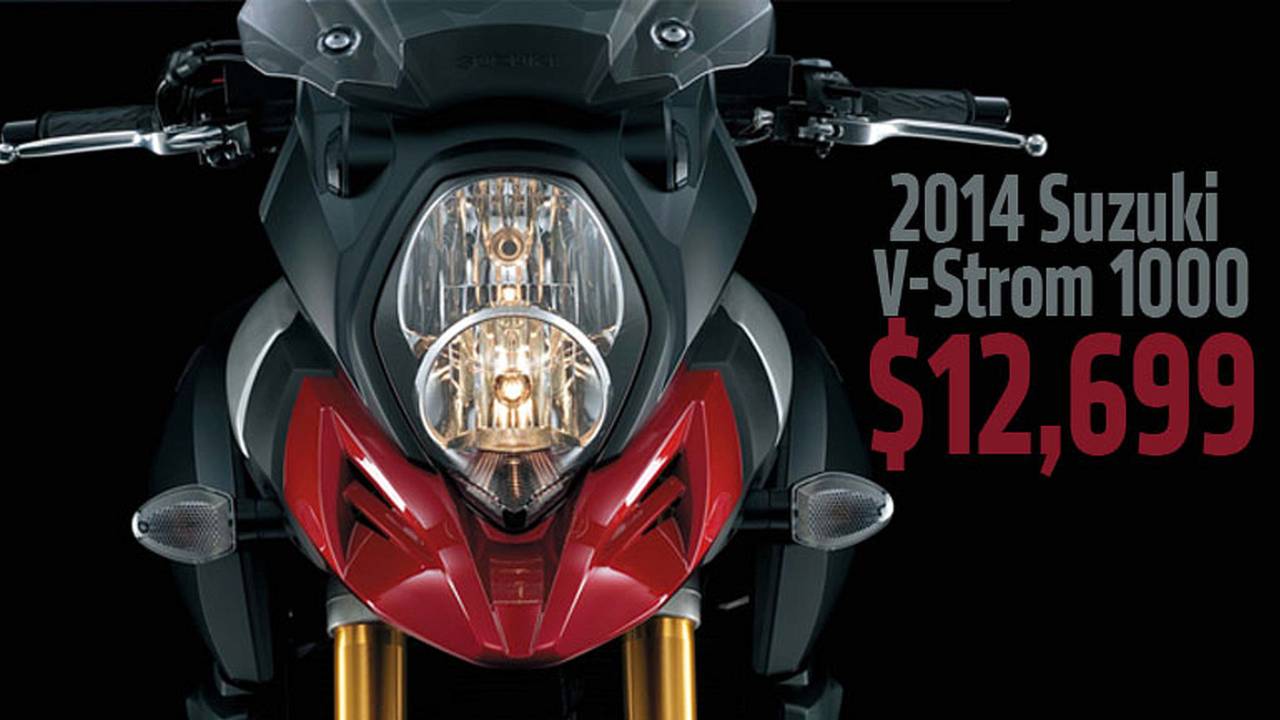 2014 Suzuki V-Strom 1000 price has been announced at $12,699. A shockingly competitive number that brings it in under ever single big ADV bike competitor.

Its official. The 2014 Suzuki V-Strom 1000 has been priced at $12,699. A shockingly competitive number that brings it in under ever single big ADV bike competitor.

Compare that price to, say, the 2014 BMW R 1200 GS, which starts at a whopping $16,100 before you start adding the de rigeur options. Like the GS, the V-Strom includes standard ABS and Traction Control.

This new, 2014 V-Strom 1000 is fitted with a heavily modified version of the TL1000's V-Twin in a new, aluminum frame. And, for the first time on a Suzuki, this V-Strom includes Traction Control.

The engine has increased in capacity from 999 to 1,037 thanks to a 2mm increase in bore. Suzuki says this has been carried out without upping the weight of the pistons. Despite debuting in the TL1000S superbike all the way back in 1997, the motor has now been thoroughly redesigned not only to meet modern emissions requirements, but to suit the unique performance requirements of a big ADV bikes like this one. New cylinders, heads, pistons, rings, connecting rods, crank, clutch and radiator combine to reduce weight and shift power and torque curves further down the rev range. It develops its impressive 76 lb.-ft. of peak torque at a very low 4,000 rpm.

That low-down torque is aided by a new single-canister exhaust fitted with a butterfly valve, something that combines with the new, two-spark-plug-per-cylinder design and advanced, 32-bit ECU as well as a comprehensive reduction in mechanical and frictional losses to up fuel economy to 49 mpg. That should be good for a 260-mile range from the 5.3 gallon tank.

Power is delivered through a new, wider ratio 6-speed transmission and a slipper clutch which will prevent the rear wheel from locking during aggressive downshifts and which is said to also decrease the effort required to operate the clutch lever. Suzuki is famous for its slick, positive, easy-to-use transmissions.

The new frame increases the wheelbase from 60.4 to 61.2 inches while shortening the distance between front axle and swingarm pivot and growing the length of the swingarm. These changes should make the bike more stable and the bike’s ability to put it’s power down without losing traction.

Traction will, of course, be aided by Suzuki’s first ever Traction Control system. That works by comparing front and rear wheel speeds to throttle and gear positions and crank speed, then limiting power via ignition timing and air delivery should a loss of traction be detected. The rider can switch between two modes of intervention or switch TC entirely off.

Safety will also be aided by a new ABS braking system complete with radial Tokico calipers and 310mm front discs. There is, however, no ABS "off" switch.

Which is one indication that this is a very road-oriented ADV bike. Front forks are upside-down 43mm items and fully adjustable, but the shock is only adjustable for preload. Wheel sizes remain 19-inch (front) and 17-inch (rear) and wheels are forged aluminum rather than the stronger-but-heavier spoked items you’d need for rugged off-roading.

But, V-Strom customers have been buying them for over 10 years not because they’re great off-road, but because they’re practical and versatile and comfortable and fast on it. That is where this new 1,000 will excel. The stock screen is adjustable through three heights and three angles; you can do so using no tools, with just one hand. Other convenience features include a 12v accessory socket located in the cockpit, a remote preload adjuster and an optional luggage system that includes hard panniers and top box. Other options include hand guards, crash protection and high and low seats, as well as a larger windscreen and a center stand — handy for adjusting the bike’s drive chain.

Four colors will be available, all classy and understated — red, white, black and even a stylish khaki.

All that adds up to a bike which is now 18lbs lighter, torquier, more fuel efficient and which should be more suited to two-up travel and carrying luggage. Stay tuned for review coverage in the near future.