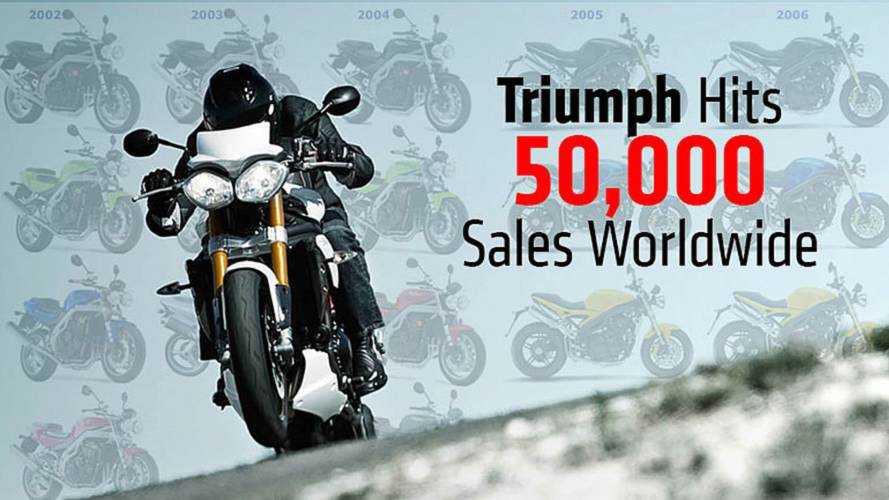 Triumph Motorcycles has just announced it has sold more than 50,000 bikes with more than 85% of them exported worldwide.

Triumph Motorcycles has just announced it has sold more than 50,000 bikes with more than 85% of them exported worldwide.

The 111-year-old company also made a record turnover of $603 million, an increase of 7.6% over 2011-2012 figures. However, Triumph posted an operating loss of $155,000 down from $24.6 million. The company attributed this change to international exchange rates and the costs of Triumph moving into new markets.

Earlier this year, Triumph opened an assembly plant in Brazil this year and another in Manesar, India to produce the new Triumph 250 Daytona models.

A Triumph spokesman said: “Triumph Motorcycles has achieved a record turnover, reflecting a rise in sales. During the 12 months to November, the company's global share of the 500cc and above market has increased to 6 percent from 5.7 percent.

"In the UK, during 2013, Triumph has continued to maintain its market position as the top seller of motorcycles over 500cc, retaining a 20 percent market share.

"Triumph has also achieved a 3.4 percent share in Brazil in our first year selling in the 500cc and above market."

Triumph is currently looking for further sales expansion and has announced it will begin to start selling motorcycles in China and Indonesia in the near future.