5 Reasons You Aren’t An AMA Member 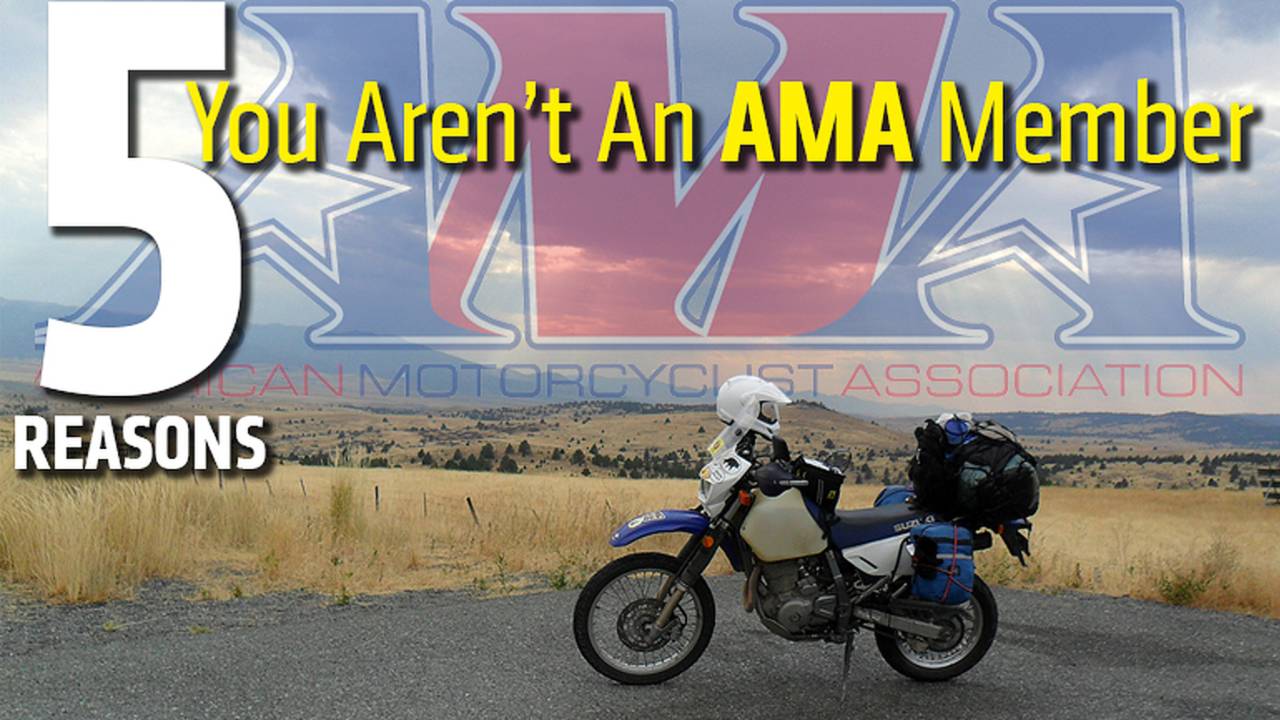 You’re not a middle-aged white dude? Here are five reasons you are not an American Motorcyclist Association member, but should be. Let me explain...

I’m a 1-percenter. Did you know the American Motorcyclist Association came up with that term? No wait...not the Mitt Romney kind; back in the 1950s the AMA coined that phrase in reference to the 99% of all motorcyclists who are decent, law-abiding citizens and the 1% referred to those who are basically just criminals. No, I’m not a criminal, but let me explain. I’m one of the roughly 1% of all motorcyclists in the U.S. who are AMA members nowadays. How did the AMA lose its relevance? These are the five reasons you aren’t an AMA member.

You’re Not a Middle-Aged White Dude

95% of AMA members are male.* Ninety-five percent. There’s only two ways to look at a statistic that lopsided. Either this organization has no idea how to get a more diverse membership or it just doesn’t want to. And though I didn’t have access to any information describing membership ethnicity, a quick review of the last three years of their magazine covers paints a pretty clear (as in, white male) picture. You only have to go back seven months to find a cover girl, but you’ll have to dive deep to find a colorful face of the AMA; all the way back to December 2010 (which is actually a quarter-cover; keep on going to August 2010 to find an actual black man/rider/AMA member gracing the cover. Asians? Hispanics? Um, none.

Other demographics that make you go hmm...the average age is 48. The average number of years riding is 26 (that’s the average). Is anyone else humming Springsteen right now? “Glory days...”

As of April 2013, the AMA’s 215,966 members reflected a 9,034-member decrease from the previous year, and the AMA reported a steady decline in the two previous years. I’m not surprised; nobody wants to hang out with their Uncle Walt all the time...not even other uncles.

Late in 2011, the AMA brought in Wayne Allard, former US Senator from Colorado, as Vice President for Government Relations (i.e., he’s a lobbyist). I don’t know if it took him awhile to get his bearings, or if he’s just late to the whole speak-your-separatist-mind-and-logic-be-damned party, but Mr. Allard seems hell-bent on painting the AMA red (with embarrassment). Consider these Palin-esque gems:

“...motorcycling’s opponents are hard at work on Capital Hill trying to pass laws to tell us what, when, where, and how we can ride ”

Kind of cool to think we motorcyclists rank up there with LGBTs and dreamers to have honest-to-God “opponents” on capital hill, but, yeah...seriously. Get real. We all know it’s those Prius drivers who’ve got America by the balls, anyway. How about this one:

“We need to protect public lands for the people, not from the people ”.

Because in the history of the world, people never did anything bad to the earth, right? The President’s proclamation didn’t specifically mention horseback riders, bungee jumpers, or scuba divers either, by the way. Dude, we know you don’t like the guy, but being a thorn in his side has sort of lost its cool.

Allard’s recent get-off-my-lawn insinuation that the Center for Disease Control has no business commenting on helmet use and injury prevention takes the cake, stating simply,

“The AMA doesn’t understand why the Center for Disease Control is involving itself in motorcycling when it’s supposed to be protecting Americans from disease. Motorcycling is not a disease ”.

Yes, he really said that. Way to make us all look like Larry the Cable-Guy, Mr. Allard. Even he knows how to Google.

Based on member demographics, AMA’s official magazine, American Motorcyclist, seems pretty on-target. The format is no less predictable: letters from riders, the obligatory letter from the president, an article about some wilderness somewhere that some state wants to turn into a squirrel sanctuary being off-limits to off-roaders (Bueller?), a reminder that E-15 gas is evil (Bueller?), a 2-page spread on an obscure bike from the ‘70s (Bueller? Anyone?)...ok, Bueller must be out joyriding on his father’s motorcycle while his dad is home reading American Motorcyclist. Shake things up a little, will you? You heard about the melee in Manhattan, right? The recent Motorcycle Film Festival in Brooklyn? Those girl racers who finished in the top-10 at Daytona? And what’s this Iron Butt thing I keep hearing about? There’s so much more to motorcycling than motocross and vintage scramblers!

Despite a deep and growing pile of evidence that concludes mandatory helmet use is beneficial every which way from Sunday (public safety-wise, economic-wise, social policy-wise, etc.), the AMA still refuses to take a stand on this one, stopping short at a “recommendation” but holding firm that it’s a rider’s choice. I may disagree with that argument, but at least I understand it. What I don’t get are cockamamie statements like “helmets don’t reduce the number of motorcycle crashes” and “helmet use alone is insufficient to ensure a motorcyclist's safety.” Duh. Man-up and fear-not being abandoned by members who insist on keeping the wind in their hair and their heads in the sand. They are a dying breed.  Literally.

Every three years, the AMA sponsors a women’s conference. Heavily cruiser-oriented, and last year, deftly scheduled on the same weekend as one of the biggest annual motorcycle events in the U.S.: the RedBull Grand Prix and AMA Pro RoadRacing in Monterey, CA, and plunked it down in logistically obscure Carson City, Nevada. One can only imagine the number of vacuum cleaners given to wives as anniversary presents from members of that planning committee. As if to underscore their ineptitude, they invited various professional female racers, most of whom were competing in Monterey that weekend, to give inspiring speeches, etc. as volunteers. And the coup de gras...they unveiled this new card design:

Good lord...do the other design options say “Male Rider”? Have you heard the word ‘equality’? My guy took one look at this, chuckled, and asked if there was a recipe printed on the back.

Give It Some Throttle

I would like to think the AMA was learning from these guffaws, albeit slowly. I’m not holding my breath. I’m not giving up my membership, either. Why? Because if I do, if you do, the AMA gets just a little less diverse. A little more red. A little more out of touch. I’m not willing to throw the baby out with the bathwater. The fact is, for all its bumbling missteps (or lack of steps), the AMA does a lot of good, and there’s a lot of good left to be done. E-15 gas is evil, motorcycle-only checkpoints are wrong, and sometimes wording does end up screwing the moto-pooch in government sponsored legislation. While I disagree that the EPA and the CDC and the AHA are secretly plotting our demise, I am old enough and wise enough to realize we need an organization like the AMA to make sure small-bore dirtbikes aren’t classified as lead-based toys. We need an organization to promote safety and education for riders and non-riders alike. We need an organization to sanction events that ensure fairness and safety among competitors. We just need to not give up on it.

You’re either part of the solution or part of the problem, right? Not an AMA member? Join now. Due to renew? Do it now. For $49 bucks, maybe you and I can eventually make this organization look and sound more like you and me. And man, that free roadside assistance program for members is great.