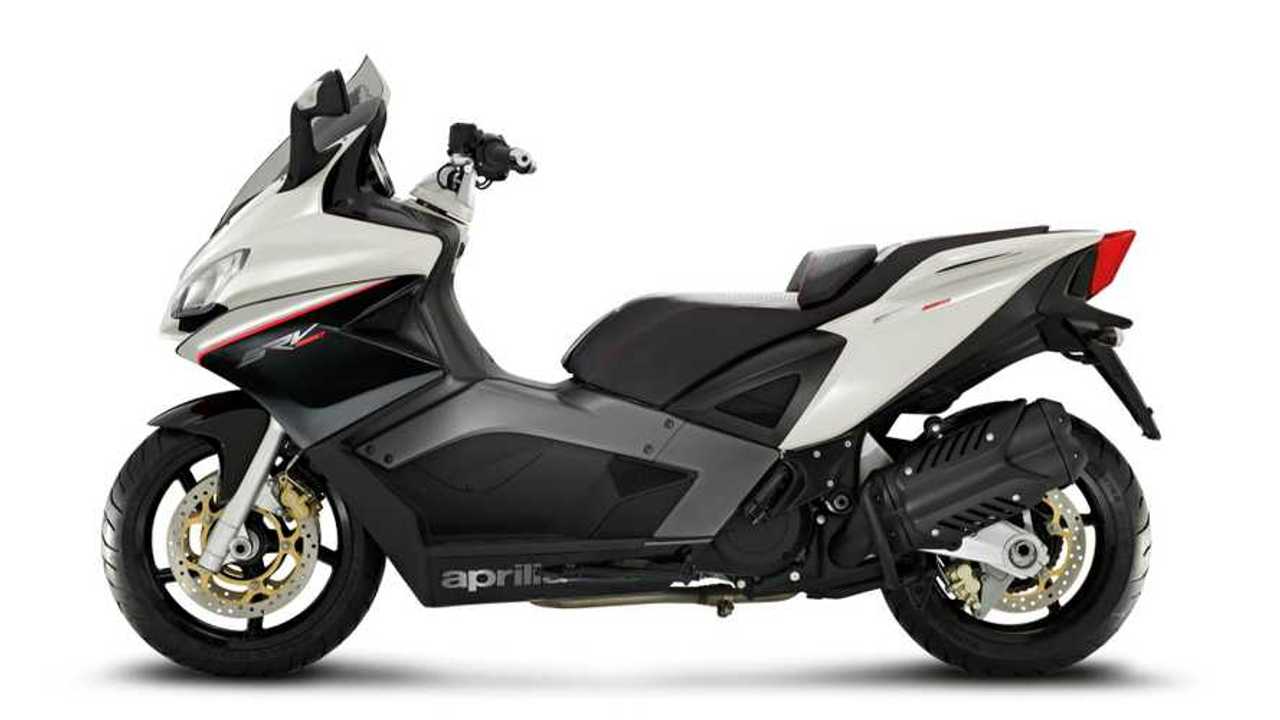 They call this a scooter?

The Aprilia SRV850 isn’t new. In fact, it’s just a re-skinned Gilera GP800, which debuted in 2008. But, it is now getting both ABS and switchable traction control. Those, plus the 90-degree, liquid-cooled v-twin with twin-spark plug ignition, counter-rotating crankshaft that’s mounted to the frame, instead of the swingarm, make this scooter more sophisticated than many motorcycles. What the hell?

This isn’t the first scooter with TC either. That was another Piaggio product (Piaggio owns Aprilia, Moto Guzzi, Vespa and Gilera), the BV350 that you saw when we ripped that Zero DS to shreds on RideApart.

The GP800-cum-SRV850 actually uses the same engine as a motorcycle too, the same 839cc, liquid-cooled v-twin and CVT transmission as the Aprilia Mana, the Gilera GP800 makes 75bhp and 54lb/ft of torque. That’s a LOT for a scooter; in comparison the Piaggio MP3 500 makes just 40bhp. Unfortunately, it has to move a lot of weight — 235kg/518lbs (dry), in fact. That’s two pounds heavier than a Mana in running order, fully filled with fuel. Still, that power is good for a top speed in excess of 120mph. It should be fairly stable at such speeds too, wheels grow to nearly motorcycle-size; 16” up front and 15” rear.

In that motor, both the crankshaft and transmission components rotate in a direction opposite to the wheels, an effect which reduces rotating inertia and gyroscopic effect. You may remember that the MV Agusta F3 makes great noise about its counter-rotating crank and its handling benefits.

That motor/transmission are also mounted to the steel, double-cradle frame, not to the swingarm, as is a traditional hallmark of the scooter configuration. Aprilia claims this gives the SRV a coefficient of stability at full-throttle nearly double that of traditional scooters — 1 rad/sec.

The rear monoshock is mounted horizontally and adjusts for preload. The 41mm forks are unadjustable. Front brakes are dual 300mm discs gripped by four-piston Brembo calipers.

The SRV is capable of 45º lean angles before dragging anything.

ABS you’ll be familiar with. Speed sensors on both wheels provide data that’s continuously monitored by an ECU. Should the rate of deceleration of one fall below the other, ABS works some magic and the brakes don’t lock. Those same wheel speed sensors inform TC operation too; if the speed of the rear wheel is found to exceed the front while the throttle is being applied, the ignition advance and injection timing are altered to limit torque until traction is regained. That’s not the sophisticated APRC system used on bikes like the RSV4, but it should be an effective safety aid on wet city streets — the SRV’s home. TC is switchable between normal and “Sport” modes, the latter backs of the intervention threshold to allow more fun. You know, because they last thing you want is for an electronic nanny to prevent you from power sliding your scooter.