I just bought a Honda CRF250L

I just bought a Honda CRF250L. It defies logic. I’m not a retiree looking to revisit motorcycle riding, nor am I 21, and swinging a leg over a bike for the first time.   I’m 36 years old, married and, with regards to motorcycles, I would consider myself experienced. I’ve owned a slew of different bikes and though I’m not sure Honda knows who they’re marketing this bike to, I’m prob...

I just bought a Honda CRF250L. It defies logic. I’m not a retiree looking to revisit motorcycle riding, nor am I 21, and swinging a leg over a bike for the first time.   I’m 36 years old, married and, with regards to motorcycles, I would consider myself experienced. I’ve owned a slew of different bikes and though I’m not sure Honda knows who they’re marketing this bike to, I’m probably not the target market.

How did I get here?

I haven’t owned a bike in the last 24 months, so my desire to be on one had recently been overwhelming. The hardest part was figuring out what it was that I wanted to buy. Money is relatively tight, and this purchase would be the only one for 24 months or longer, so be smart I told myself, be smart.

So running down the list, I’ve owned the following: F4i, RC51, Brutale, Monster, Hypermotard, and real motards, lots of motards. I’ve owned a KTM LC4, 650R, SMR450 and a DRZ SM. Once you ride a dual sport or a motard in The Bay, it changes everything. Near death experiences happen less often. Even better, you arrive at your destination with a smile on your face, and more often than not you get there faster than you would on xyz sportbike.

So once again I had narrowed down possibilities of ownership to something dual sport or motard in nature. I also knew I wanted to buy new. In California, you can’t plate anything with a headlight, like the rest of the country seems to be able to do. There would be no WR/CRF/RMZ with a plate for me. Someone pointed me to KTM, but the Freeride is MIA and the other KTM models seem nearer to $10,000. Unbeknownst to me, Husqvarna had killed off the SM610 and SMR range, all of which would have been contenders in my search, so I was left wondering what to do. I could buy an older XR650L/R but it struck me as crazy to pay a premium for a 10-year old bike, just because it had a plate. For example, a dealer near me was selling a 2005 WR450 with a plate but they wanted $5,500. Additionally, an older bike concerned me because we share a garage, and space is limited, so wrenching at home isn’t really that easy or fun.

I had read Wes’ articles on the CRF250L and it seemed really interesting to me. The bike has a low MSRP, awesome fuel range, and all in a reportedly competent package. The threads on ADVRider and Thumpertalk seemed to reaffirm the competence of the package. So I hit the local dealer. It took me 5 visits to see one, as his stock was revolving on a daily basis. Bike came in, bike went out, repeat, repeat, repeat. When I finally got check one out, I was incredibly excited, lined up next the 250 and 450 'R' models the 250L didn't look like some weak beginners bike, or bad marketing idea. I wasn't embarrassed to push it outside and start it up. Even better was that it looked like, felt like, and rode just like a Honda, even one made in Japan. There was no "I'm made in Thailand" look or feel to be found. I don't even know if that is a stigma, but none the less. Again, I was blown away, standing in the dealers parking lot, clicking through the 6-speed transmission, in California, on a dirt bike with a plate. Done deal, paper work signed, the bike was mine. 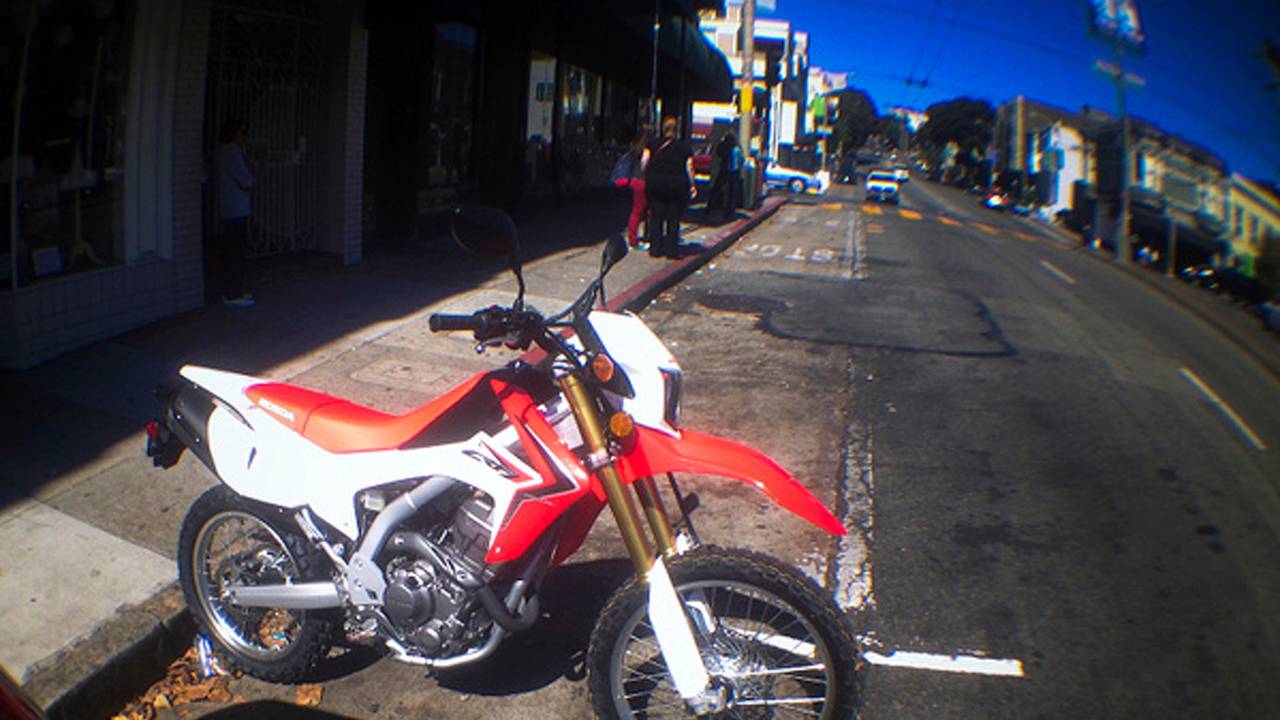 In short, the bike is awesome. If you’re ok with knowing you’ve got the throttle open to the stop, and you can enjoy what that means, then there is no reason not to buy this bike. The build quality is Honda-perfect. The DRZ always felt kind of sub-par, I don’t know how else to say that. The Honda doesn’t, it feels a lot like the $8,500 dollar CRF450R. The dash is a favorite of mine with its pale white luminescence. You leave the line in first and quickly find yourself in 6th doing 60+mph. The weight and stance of the bike are what saves it from being mundane. In the city, or out in the hills, you change your line with the most subtle of gestures, and you do it with the throttle open, feeling like a Moto2 rider as you carry corner speed.

I remember a friend’s BMW 450X he had just bought, and when I asked him what it was like to ride and he just pointed to the motor and said, “that thing screws.” I instantly imagined a WW2 torpedo rocketing out of a U-Boat towards its target, no drag, all thrust. I rode the bike a few moments later and he was right, it was like zero to g-force in an instant, it even shamed by SMR 450. The 250L doesn’t screw, it kind of winds up, hits its sweet spot, and then everything afterwards is noise.

On the SMR you could downshift to second, take a right hand turn in the city and, as you exited the apex, just open the throttle and pick the front end up. That hasn't happened on the 250, I'm not sure that it will. Instead, you down shift, and make the right hand turn foot down, motor spinning, covering the brakes but not on them, and carrying speed. I feel like I’m riding a power assisted downhill mountain bike. In San Francisco your bike is too slow if you leave the line at a green light and the pink vespas and clapped-out Elite 80s drop you. The CRF doesn’t get dropped, the torque is strong, and the stop light to stop light drag races are good—its capable enough. On the highway I’ve done an indicated 75 so far, and the motor is still tight. Riding my SMR on the highway I was afraid to ever go over 70 and even then I would ride it to 70 and hold it, then back it off to 55 and throttle it back up to 70 and repeat, it was hellish.

And The Future Brings 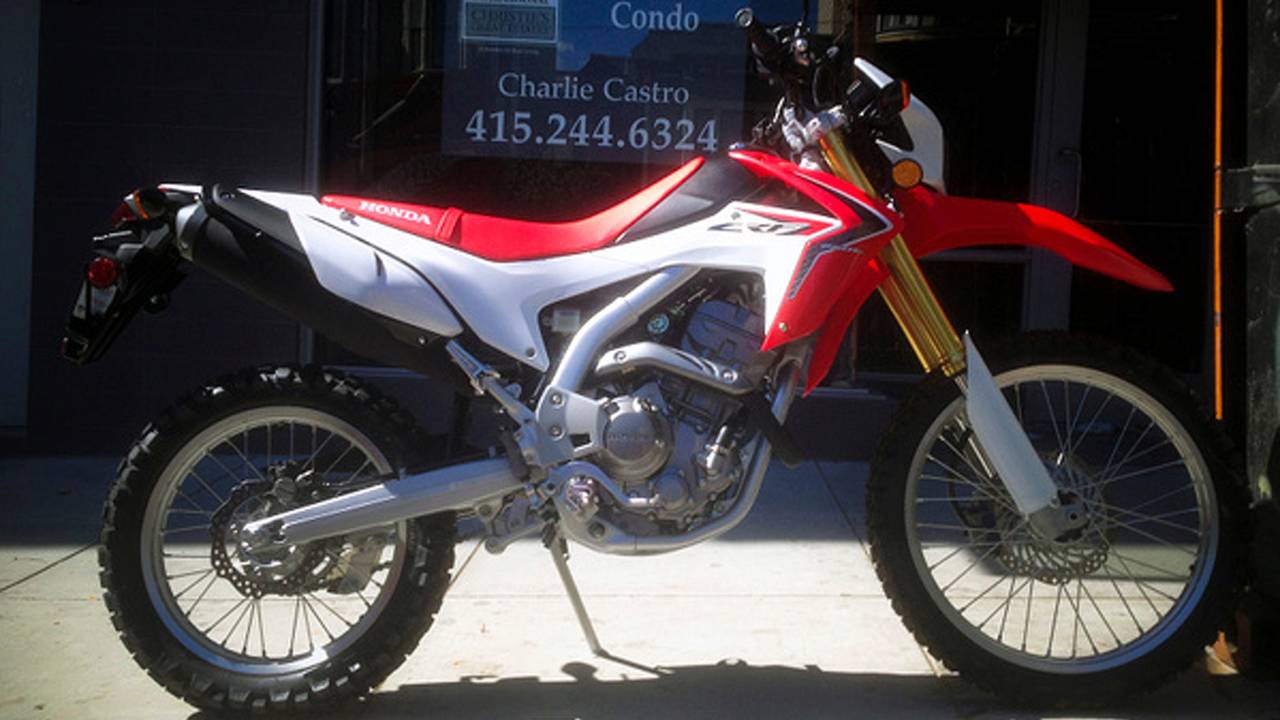 I find myself incredibly appreciative of the bike, and want to change little. I plan on getting the suspension sorted, cleaning up the rear plate/light monstrosity, and otherwise just riding the heck out of it. The front fender catches wind at speed and in turn it makes the front end a little twitchy, so I’ll probably change it out for an Acerbis supermoto fender. I come from a Dunlop family and the stock tires say IRC so I’m not sure what that means but they’re going on Craigslist once I make it to the first service at 500 miles. I think I’ll try a Dunlop D606 on the front and a D803 Trials tire on the rear. The seat strap is ridiculous and positioned perfectly so that I’m always sitting on it, so that’s coming off too. I think the vibe for any accessories added to this bike will be OEM plus. I want to make sure that this isn’t my personal Range Rover Evoque, that rather than just play at adventure, I actually get out there and ride the bike. So next week I’m going to hit a OHV park local to me, and later this fall find some backroads into Yosemite.

You'll be able to follow my experiences with the 250L on Tumblr.