Ever since I left the Navy, I've wanted to ride an adventure ride across the country: I bought a Triumph Speed Triple, hard-mounted two 25mm ammo cans as saddlebags, and requested to withdraw the entirety of my Thrift Savings Plan.

Chapter One: San Francisco, California to Somewhere in Nevada

It’s not the thrill of the jump that motivates me. In fact, the jump scares the hell out of me. My motivation is the fall. A few heartbeats after the fall becomes inevitable, and adrenaline allows reflexes to take over, there is no time for contemplation. The intensity of these moments shows me the limit, and when I come down, I can consider what I must do to cross it.

Ever since I left the Navy, I've wanted to ride a motorcycle across the country: I bought a Triumph Speed Triple, hard-mounted two 25mm ammo cans as saddlebags, and requested to withdraw the entirety of my Thrift Savings Plan. May 18, 2012 was my separation date and I didn’t have school until the beginning of September. This would have been the perfect time to start the trip had there not been a mandatory orientation directly in the middle of this break. 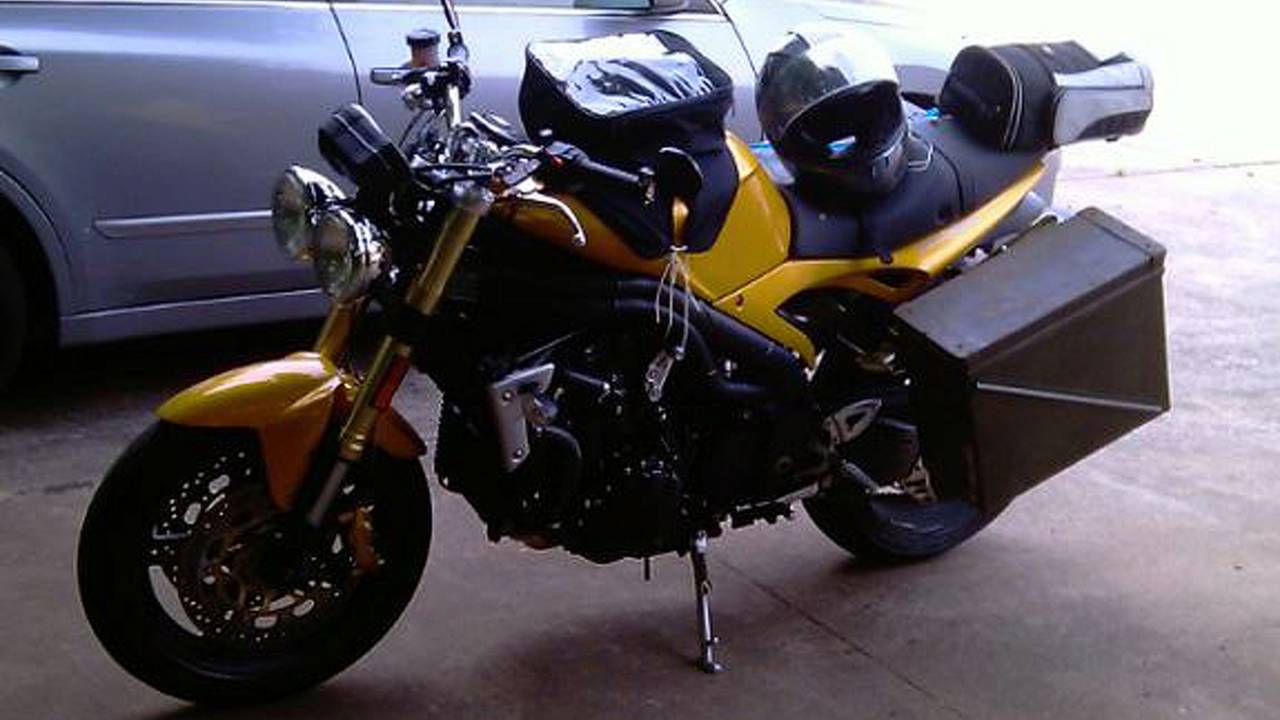 I kicked myself every day for the next three years for not going on that trip. May 18, 2015, however, gave me the opportunity and I jumped on it. I had a 30-day break from school and enough money in savings to survive a month alone on a motorcycle.

A few weeks before I left, I gave Jesse Kiser a call to ask if he could get a long-term adventure bike and explained to him that I wanted to ride it to North Carolina. We discussed the makes and models that would be suitable for this kind of trip and put together a list. On it was a KTM 1190 Adventure, BMW F1200GS, Suzuki Vstrom, Yamaha Super Tenere, and a Kawasaki Versys— the top pick being the KTM of course.

Jesse worked his email magic and told me that he got a bike. After a series of crude requests for sexual favors, Jesse revealed that he scored a KTM 1190 Adventure for one month and 6,000 miles.

At the time I thought that I may go a few miles over that 6,000 mile ceiling. I ended up bringing it back to KTM with 8,200 of my own miles on the odometer.

I didn’t get much sleep that night.

Around ten o’clock, Jesse pulled up on the bike that I would soon be riding across the country. The yellow street lights toned down the KTM’s orange paint to a warm red. Even while standing on the curb, the bike was still unusually tall. Two enormous hard saddle bags were fixed to the tail and it had a huge exhaust. I noticed the sleek design of the windshield as it carried the light from the headlamp through its profile to illuminate its perimeter. It's pretty cool how it does that, and it really makes this bike uniquely identifiable at night time. I felt like a tweenage girl at a Justin Bieber concert.

“I’m freaking freezing!” Jesse exclaimed as he removed his helmet. I noticed the red glow of a heated gear switch coming from his jacket and thought, “wuss.” After I helped him carry the side bags inside and he was settled in, Jesse suggested that we go get some burritos. I ran around back to fetch my Triumph and hit the start button. I should tell you that I have an aftermarket exhaust installed, but I’ve been too lazy to get the ECU flashed, so on cold nights it takes a few more revolutions to get the engine running. I was about to embark on a huge semi-planned trip, so of course that night had to be the night that I killed the battery trying to start it.

Jesse suggested that we ride two up on the KTM, but I couldn’t bring myself to do that. I know Jesse would enjoy it, but the feeling wasn’t mutual. I told him to keep warm inside while I go get the burritos.

Starting a new bike is always an experience, and as always, I could not refrain from revving the engine. From the numerous makes and models of motorcycles that I've ridden, only three have surprised me. The first was during the first weeks of my job at the Honda motorcycle dealer. That bike was an RC-51 with a V-twin monster in the frame. A quick blip of the throttle sent the odometer to 5,000 before I had the reflex to back off. The second was my Triumph Speed Triple; another bike with an instant rev increase. And now the third, the KTM 1190 Adventure.

I knew well before clicking the KTM into gear that this tall girl was going to be a beast. I zoomed towards the best burrito joint in San Francisco, Taqueria del Farrilito, and purchased two carne asada super burritos.

The next day, I made some jumper cables out of 14 gauge wire and got the Triumph running again. I felt uneasy leaving the bike with Jesse, but he didn’t seem to mind. It was about 10:00 AM when I embarked to my first destination, the Pacific Ocean. I chose to go to the west side of San Francisco, because it wouldn’t really be a cross country trip if I didn’t start at the ocean. The traffic in the city was intense. The KTM is about four-feet wide with the hard bags mounted, so lane splitting was a bit restricted. It took nearly an hour to travel the twenty miles to the ocean, and, fortunately, I made up my mind that I had way too much gear.

Aside from what was inside the saddle bags, I had a full military duffle bag, a backpack, a tripod, a tent, and this weird back roller thing that I definitely should not have brought. I made a quick pit stop back at my apartment to drop off some of the stupid stuff I thought I could bring along. Obviously I kept the back roller.

I was wearing a Craigslisted Bilt Jacket, a new pair of AGV adventure pants, an Icon Airmada helmet, military issue boots, and a pair of fingerless workout gloves. I also had a heated bib (which I foolishly traded for my only gloves that were worth a damn), a fleece jacket liner, and some hand warmers. This particular wardrobe was, as I would soon realize, not good enough. I was back on the highway and headed straight toward Yosemite National Park.

After powering through the dehydrated scar that stretches the longitude of California, I entered the beautifully forested Sierra Nevada Mountains. The GPS took me to Yosemite Highway, which was the closest public road to a race track that I have ridden. The flawless pavement was super dark and absorbed a lot of the sun’s heat, allowing me to push the KTM’s Continental tires limits around the 60+ mph bends. This road rides along the sides of the mountains, exposing the upcoming curves miles in advance.

Yosemite Highway rides near a reservoir that looks ten days away from empty. I was pretty amazed by this, but it justified why water tastes like eggs in LA. The lack of water in Yosemite is also affecting the risk of fire. As I pushed into the heart of the park, I rode by miles of recent burns. The settling fog made the charred tree skeletons look like an ominous opening for a Steven Spielberg movie. I ended up spending the day’s light exploring the area and found myself setting up a camera to get some off-road shots.

When Jesse got the KTM for me to ride, he told me the media guy said that this bike “comes alive” once it is taken off road, but they didn't have time to install the knobby tires before the pickup. I rode in front of the camera a few times, making sure to avoid a trench around a bend in the fire trail, but on my last pass, I fixated on it and went straight into it. The front tire followed the trench to the left, and the rest of the bike followed its momentum to the right. Luckily, I was only doing a few miles an hour and there were only a few scratches. It did certainly hurt my confidence, being my first day and all.

I collected myself, strapped everything back down, and got back on the road. I rode a few miles and pulled over at the ranger station, parked the bike on its side stand, got off, took off my gloves, and turned around just in time to witness it falling over again. This time it was on the left side and it took out part of the clutch lever. I was ashamed of myself. After attempting to lift the bike once, I noticed that the kickstand was still down. “It fell over the kickstand!” I whined. Distraught, I got back on and rode out of the park.

I didn't look at every detail of the route, but soon found that snow was going to be part of my night no matter what. It dropped to just below freezing and my new found self-consciousness assured me that I was going to hit a patch of ice to bring my total number of crashes for that day to three. Luckily, I made it over the summit of that mountain and descended towards Nevada with the shiny side up.

The outside air temperature rose to the low fifties, giving me something to be happy about. I kept my eyes peeled for a spot to set up the tent, but the further I traveled into the desert, the darker it got. I couldn't see anything beyond three hundred feet of road in front of me.

The state roads I was riding in Nevada were straight for miles before suddenly becoming ninety-degree turns— a few of which caused me to get a feel for the KTM’s anti-lock Brembo brakes. I did this for hours until I finally reached a town where I got a $30 hotel.