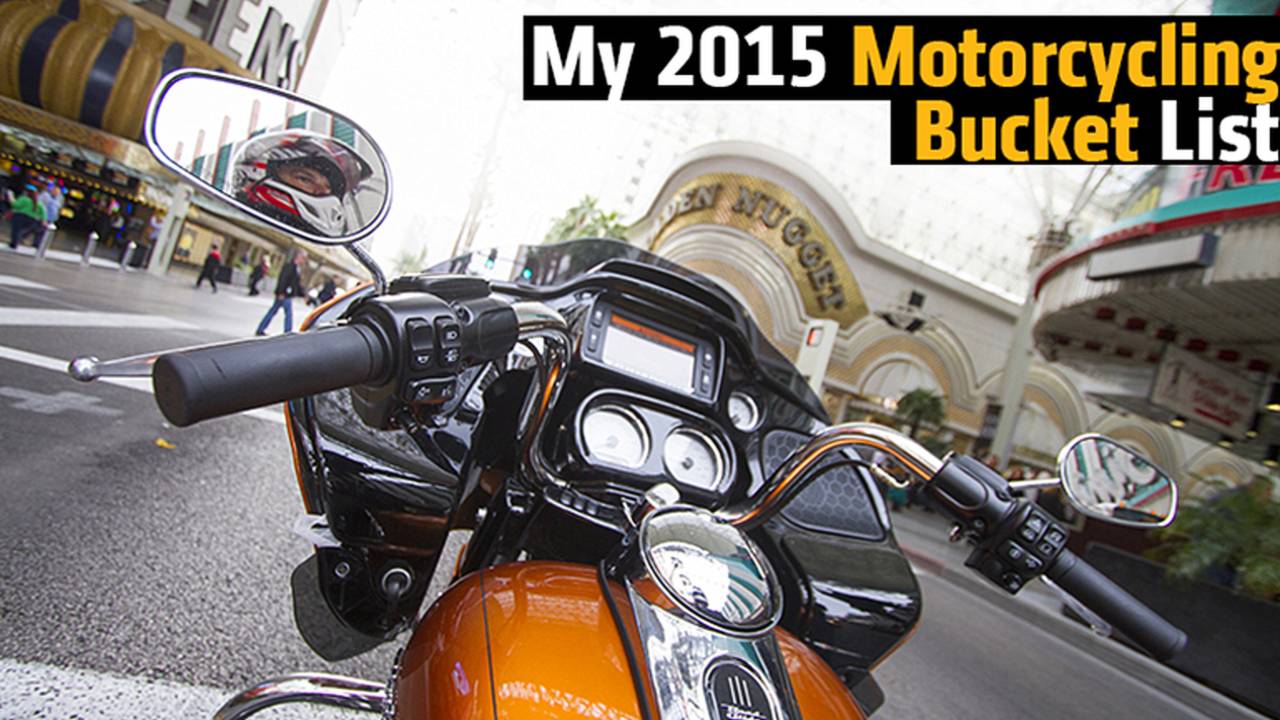 I won’t bore you with my personal list of New Year’s Resolutions, like eating better, eating less, not eating so late, and many others that involve eating and working out. Instead I’ll just bore you with my list of motorcycling goals for 2015 - plus, you and I both know I’m not eating any better this year. This is my 2015 Motorcycling bucket list.

Ride Across The Country

We’ve all wanted to do it, but few have gotten around to making a coast-to-coast trip. It doesn’t seem so crazy sitting by your computer, but there are few things can generate that unique feeling of being alone, lost, late at night on a deserted highway, like a big road trip can.

READ MORE: What Was Your Favorite Moment in Motorcycling in 2014?

My childhood friend, Greg, has been studying transportation design at an art school in San Francisco, after moving from our home state of North Carolina. He had some issue with the California DMV (like every other California resident) resulting in him driving his truck back to NC, to be left at his parent’s house. This was in lieu of heavy registration fines, but it was really just an excuse to make the trip. Because when he’s ready to move home this year, he’ll only have his motorcycle.

Strapping everything he owns, which is literally an air mattress and Ikea desk (although he’ll trash the desk), to the back of his Triumph Speed Triple and hitting the road is something Greg has talked about for a couple years. Hopefully, if I can pressure him into letting me join him, then we’ll both finally do it.

I drove 40 West when I first moved to LA, taking turns sleeping and driving with my dad, but which route should Greg and I take heading East? This trip would also mean I need to get to work in the garage as I’ll probably take my personal bike.

Get Dirtier With an Adventure Bike

Recently we took two KLRs up through the canyons, down the highway and finally onto some limited dirt. I grew up on vintage trail and dirt bikes, but the heavy KLR (heavier than a dirt bike) along with much heavier bikes like a BMW GS, KTM Adventure and Triumph Tiger require a completely different way of riding.

My long absence from dirt has also hindered my riding technique. I found myself employing text-book don’ts, like using the front brake and sitting down at the wrong time. My sloppy riding habits ultimately resulted in me dropping the bike.

This year, I want to get back to my roots in the dirt... pun intended.

LA to Vegas the Hard Way

I’ve wanted to do this for a long time now, in either a truck or motorcycle. Not so much the race, but mainly just experience the route itself. Daydreaming about tearing up the dirt and rocks every time I drive to Vegas. There are a couple different races and tours, like the Go Desert Riding Tours, but I don’t really care how I do it, I just want to experience this route.

After watching some of the coverage from the Barstow to Vegas rally, it has me itching even more.

The crazies at Bixby Moto just did it on Scooters... yeah, an off-road race on Scooters. My hat's off to you guys.

Go to a Track School

I’ve been to the Bondurant School of High Performance Driving, the Advanced Motorcycle Safety Foundation class and others, but never a track-specific sportbike school, like the California Superbike school. We’ve talked with the man himself, Keith Code, who invited us to attend, but we’ve yet to make it happen. This year, I want to make it happen.

Get My Girlfriend on the Saddle

She’s been itching to ride, especially after I taught her on a 2015 1200cc Sportster SuperLow. I don’t care how much you call a Sporty a girl’s bike, it’s still a big, tall, heavy motorcycle with a crazy stiff clutch. It’s far from the best bike to learn on, especially if it has $2,500 in chrome accessories on it.

The important thing from that experience was the fact that It didn’t intimidate her, which has given me inspiration to get her on a more reasonable bike. I’m thinking an early Honda CB350 or a new CB300F... but maybe because those are just bikes I really want to ride.

When I first started at RideApart I posted about the Craigslist Project bike. A Suzuki GS750 I picked up from a friend for cheap, $200. Got it mechanically sound, with a strong idle and synced carbs (after about 12 rebuilds) and then immediately took it down to the frame with only a vague idea of what I wanted to build. My a budget, interesting swap meet findings and reader feedback have been influencing the build as it comes.

Well, now RideApart has taken most of my time, leaving little for the Suzuki. It’s still down to the frame, with a good clean, prepped engine ready for paint, a new front suspension and a killer swing arm. I have to finish the shock mount and cut a good Honda CB750 tank I picked up, to make it fit (the Honda tank has prettier lines than the Suzuki).

My goal for 2015 is to simply finish the damn thing.

Build the Motorcycle I’ve Always Wanted To, Just For Me

No influences, fads, or anyone telling me what to do or how to build it. A motorcycle I know will get me anywhere I want to go with all the comforts I want in a bike. No excuses.

A bike that I want to ride and I want to build. Something to be proud of, but never worry about meeting anyone else’s approval. Just a bike that is built for my wants, size, comfort and riding style. An aggressive cruiser, with perfectly sized hard cases with room for my camera equipment and lap top, floorboards, a separate space for a tool box, a fairing with a custom radio and compartments. Everything I want in a motorcycle, but this time in just one bike.