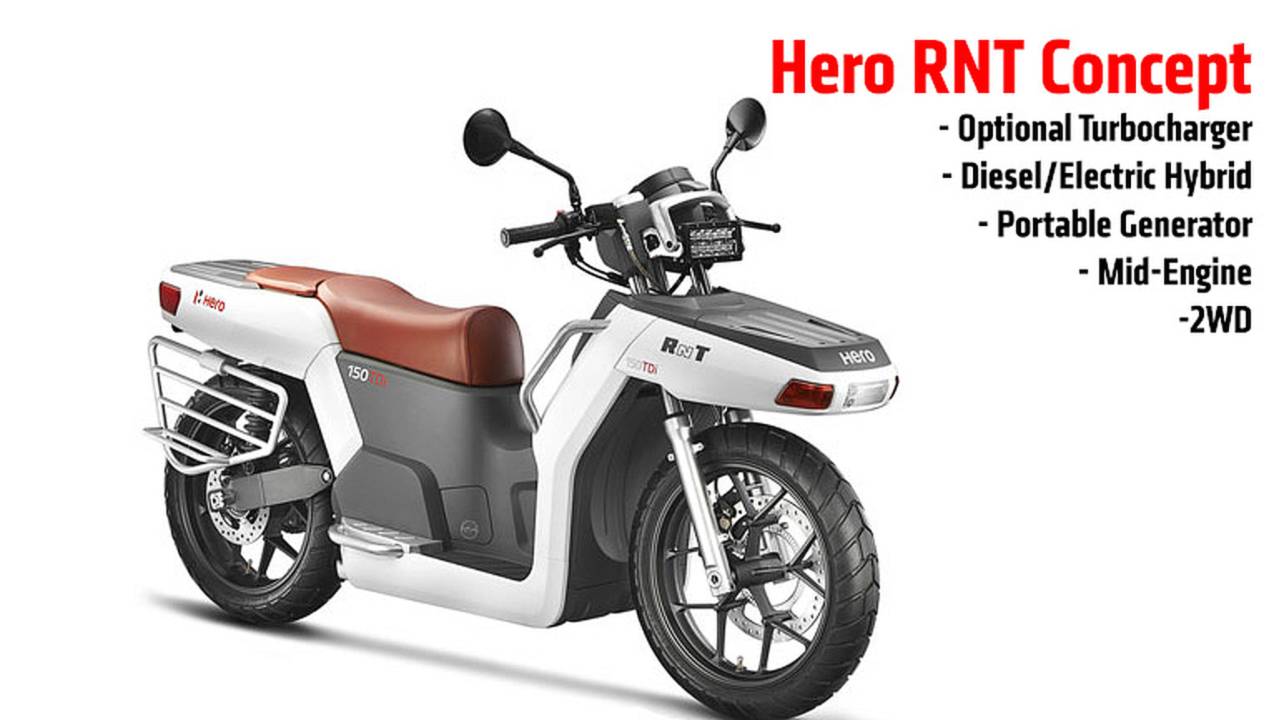 Well that’s a mouthful. The idea here is to create a go-anywhere, do-anything work horse for the domestic market that’s both efficient and unprecedentedly useful. In addition to the 150cc diesel motor (with optional turbocharger!), the Hero RNT is equipped with a tiny electric motor in it's front wheel hub, giving it 2WD. The whole package is designed to carry heavy loads, then serve as a mobile generator once it’s reached its destination. Wow.

That 150cc, single-cylinder diesel motor is said to produce an average-for-the-size 14 bhp, but what’s surprising about it is its claimed 26 lb.-ft. of torque. In comparison, the Kawasaki Ninja 300 makes 20 lb.-ft. from its larger, two-cylinder motor. That engine is mounted in the middle of the frame in a similar arrangement to that popularized by the Yamaha TMAX; moving it off the swingarm (traditional scooter engine location) massively aids handling, ride and stability.

The Hero RNT's sari guard doubles as a load rack.

That’s then supplemented by the 1.3 bhp in-hub electric motor. Details on what type of motor that is and how it functions in relation to the diesel engine are unclear, but Hero does mention “separate throttle control.” Given its moderate power output, its conceivable that the electric motor has been designed to apply power when the rear wheel loses traction and slips, to aid the bike as it climbs hills, to supplement full-throttle acceleration or to operate as a separate means of motivation should the rider enter a zero-emissions zone.

Also notable about the RNT is its…challenging styling. That protuberant nose is actually designed to function as a luggage rack. Again, details of this concept motorcycle are slim, but there’s a chance it could additionally serve as an impact-absorbing crumple zone, a la the revolutionary BMW C1 scooter.

Additional storage is provided by the very flat passenger seat/luggage rack combination and the sari guards which double as racks. Sari guards are a legal requirement for powered two wheelers in India. The step-through foot area is also flat floored and supplemented by large “handles” which Hero says can be used to strap on packages carried between the rider’s legs.

The LED front lamp is removable, doubling as a portable work light.

As this is a concept motorcycle, other gee whiz features abound, but would be unlikely to reach production. The large, multi-LED headlamp is equipped with its own battery and can be removed from the bike to serve as a work light. Also said to be hypothetically optional are an oversize generator enabling the bike to double as a mobile power source at a work site or even a turbocharger capable of upping performance.

Now in its second year of independence after leaving its long-term partnership with Honda, Hero is eager to flex its muscles as the world’s second largest motorcycle manufacturer. Not only is it making inroads into Western markets with its new partnership with Erik Buell Racing, but its rumored that the firm could soon unveil a 600cc supersport bike aimed at tackling the Japanese dominance of that sector. Stay tuned.