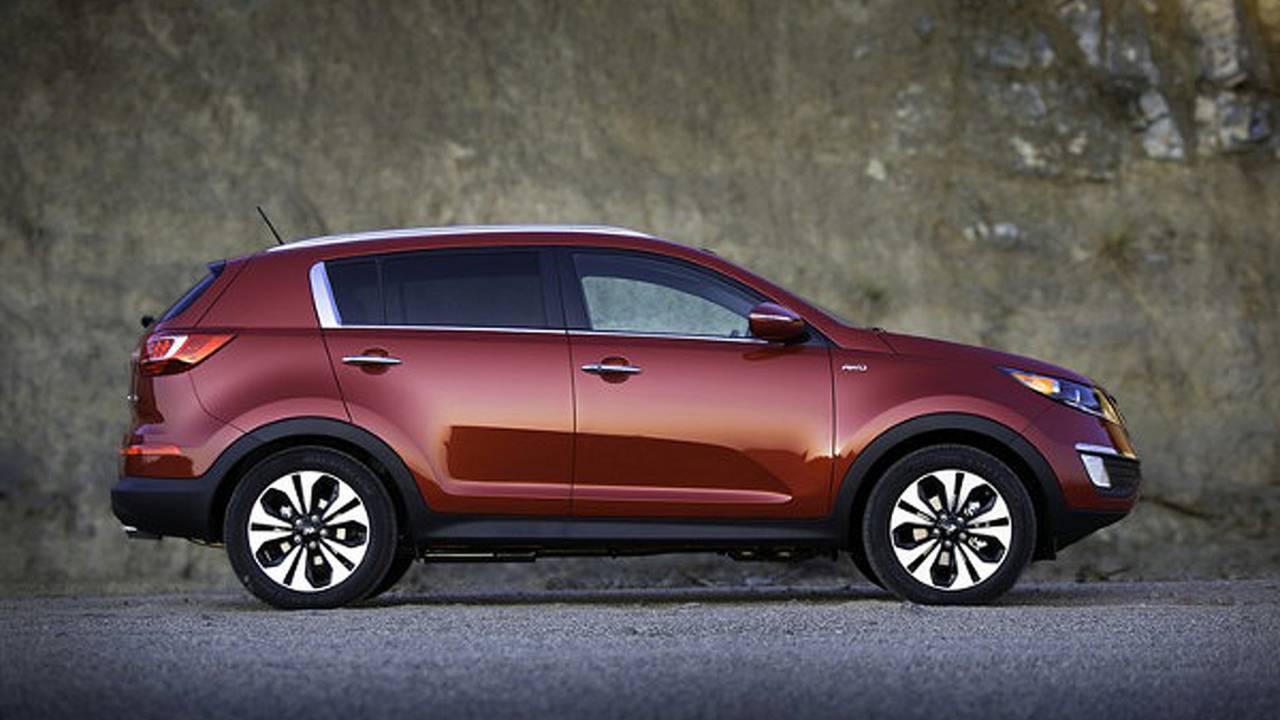 DriveApart Review: 2013 Kia SportageRideApart Overview The Kia Sportage is back for 2013 sporting some cool new features and one of the best designs...

The Kia Sportage is back for 2013 sporting some cool new features and one of the best designs on the road. For 2013, the Kia has been mildly updated with some interior and exterior additions but the Sportage remains the same award-winning, fun to drive, sporty compact crossover we've grown to love.

Some of the new for 2013 exterior accents makes the body styling of the Sportage even more impressive than before. The design is unlike anything else in the small, cute-'Ute segment. We also like the technology on the 2013 Kia - a UVO Powered by Microsoft Infotainment System with USB input with MP3 capabilities, SiriusXM satellite radio and Bluetooth connectivity.

The MPG is somewhat average compared to its competitors - only 21 MPG city and 30 highway. Also, the Sportage isn't as luxurious as other models in the segment, especially on the base models.

Profile of the Kia Sportage.

The towing capacity of the Kia Sportage is 2000 lbs, so you’ll be able to tow a trailer and a pair of motorcycles but not much more than that. The cargo capacity in the Kia Sportage is pretty darn great with 26.1 cubic feet with the rear seats up and 54.6 cubic feet with the rear seats folded down. That's more than enough to carry your groceries, a dog and a flatscreen TV and whatever else you’d want to throw inside.

We really like the Sportage SX, especially in its fully kitted out guise with the turbocharged mill under the hood and the all-wheel drive system keeping us on the road. With the AWD, the Sportage continuously monitors the driving conditions providing the best handling for whatever situation you throw at it. While we didn’t have a chance to take the Kia off road, we did experience some inclement weather for Southern California. The Kia did just fine through the flooded streets of Los Angeles. A nice bouns – the AWD system can kick 100% of power to the front wheels both enhancing overall efficiency and street performance. Another nice feature if you heading to your favorite single-track – a nice lock mode is available to even out the torque between the front and rear axles at up to 25 mph.

The Premium UVO Powered by Microsoft Infotainment System is nice little package and comes with all the tech bells and whistles you’d need. There are also a lot of standard safety features – hill control, abs, break assist, to name a few - on all Sportage models, even the base ones.

The base Sportage gets a somewhat average mileage, 20 city and 27 highway. The naturally aspirated engine with an automatic transmission get 21/30 for the FWD and 20/27 for AWD. The turbocharged models fare a little poorer at 21/28 with FWD and 20/25 with AWD. It's not fantastic gas mileage, but you could worse in an SUV, especially a turbocharged one.

Not much of the interior has changed from 2012 to 2013. The base Sportage is pretty darn basic and lacks all the navigation and tech goodie. As you move up the food chain there is a lot of standard content - a boon over the previous 2012 model. Much of the exterior remains the same for 2013 with the exception of the introduction of a few key exterior accents. There are few options for the seats from your basic cloth that’s been treated with Clean Tex that provides anti-static, anti-soil, anti-bacterial properties to a supple leather package.

For 2013, Kia has introduced few minor changes to the vehicle and added a little more standard content, but we think it still has the same knack that made it such a killer in the small crossover segment. A great value and a fun drive with some fantastic modern lines. We’d like a turbocharged SX with AWD in Black Cherry, please.