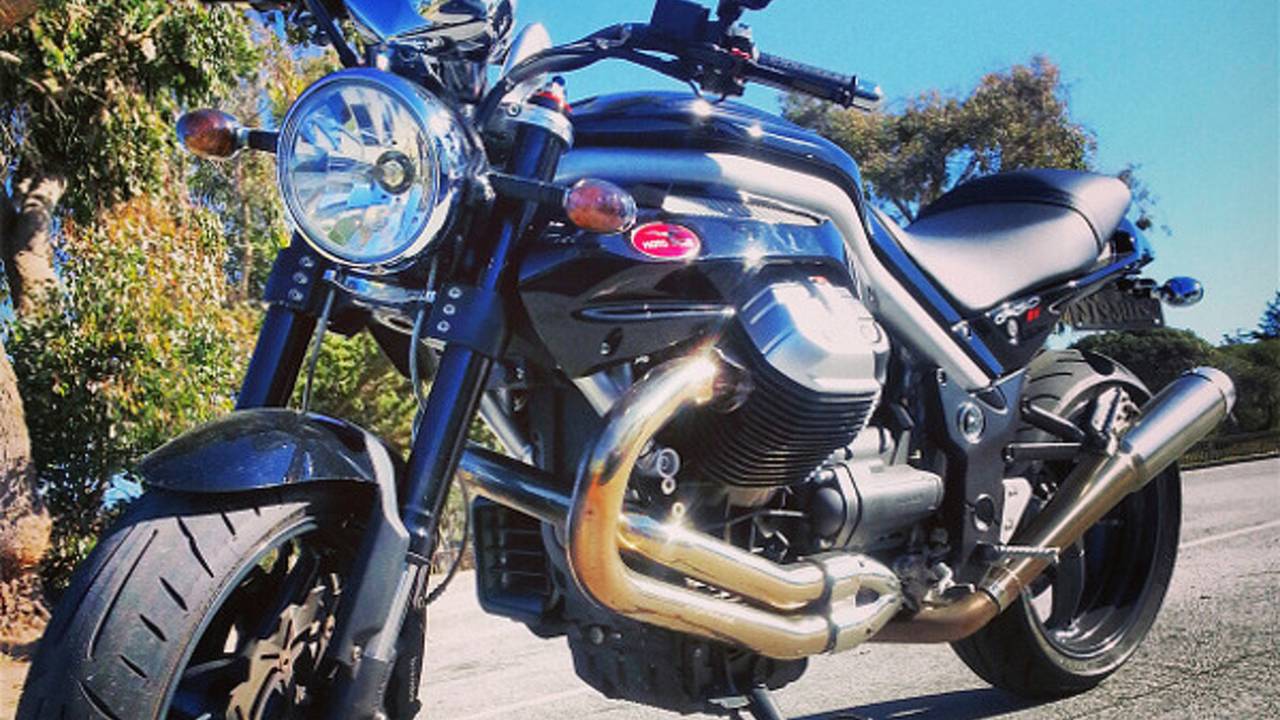 Real Rides: Lemar's GrisoA roadster is a naked motorcycle that has performance and agility like a sport bike - they still have a comfortable riding...

A roadster is a naked motorcycle that has performance and agility like a sport bike - they still have a comfortable riding position for the rider. They are not outright sport bikes but they do retain some of the specs that a sport bike has. The Moto Guzzi Griso 8V SE was introduced in 2007 with a redesigned larger capacity 1200cc engine.

Lemar on his Griso.

Lemar has been wanting to ride a motorcycle since he was a child however "his mother said that she would disown him if he bought one." So he purchased fast cars instead - a BMW 3 series, a Dodge Charger and Porsche Cayman - until in 2011 he attended the MSF course and purchased a 2011 Yamaha Star Stryker. A year later, he upgraded a 2006 Harley VRSCR street rod and then then to a 2009 Moto Guzzi Griso for the better performance and handling.

In 2005, Moto Guzzi introduced the Griso as a performance roadster with a v-twin engine with Italian looks and design. Its 1151cc engine has 110 horsepower and 80 foot pounds of torque. It was designed to have all the power and performance of a sportbike but with the looks of a Italian roadster. It has been designed to look like a work of art - with distinctive lines and styling accentuated by the gas tank. The engine is the heart of this design being shown off at the center of the frame. It's an Italian cruiser that screams power, performance, looks and agility. We've written about how much we love the Griso here and here.

Lemar and his daughter with the Griso.

Why He Rides A Griso

Lemar bought the Griso because he was "drawn to the Griso's modern, muscular and chiseled lines." To him it looks like "a classic roadster that Marlon Brando would ride" yet it "still has modern features like shaft drive, adjustable suspension, and a 8 valve 1200cc oiled cooled engine." Lemar also enjoys the Griso because its capabilities, he says "The ride gives you a sense of power and domination on the road, it does lack the smoothness that comes from today's more tame metric bikes, this brute torquey power yields a sensation that can only be describe as riding a wild bucking bronco as a opposed to a well mannered riding horse." In dancing terms he says to think of the Griso as "hot chick that can bump in grind to some good hip hop" compared to a "a ballroom dancer which more metric sport bikes are." Performance wise, he compares it to "a sassy Italian mistress," and it has the brute power needed to be confident riding in today's streets." With the Griso, he says "I easily turn into corners, I feel like I am part of the bike and truly one with it." He enjoys this feeling while "riding and exploring Monterey County's back roads."

Lemar purschaed the bike with the following modifications:

2) Custom mapping of the engine

4) The suspension was set up for canyon carving.

"I usually doesn't pour thousands of dollars into modifications on motorcycles because I know from personal experience that it usually doesn't pay off when it comes time to sell." However, he purchased this Griso with the mods already on them because he enjoyed how it changed it changed the bike's performance.

Lemar states "I might purchase another bike, but I will keep the Griso in my stable."