Pro Skater Arto Saari rides a Moto Guzzi California 1400 from Los Angeles to the Arctic Circle and back, documenting the entire road trip with epic photos.

This summer, we dispatched pro-skater/photographer Arto Saari on a 8,000 mile road trip from Los Angeles to Dead Horse, on Alaska's northern coast. The bike? A 2013 Moto Guzzi California 1400. These are the photos he shot along the way. — Ed. 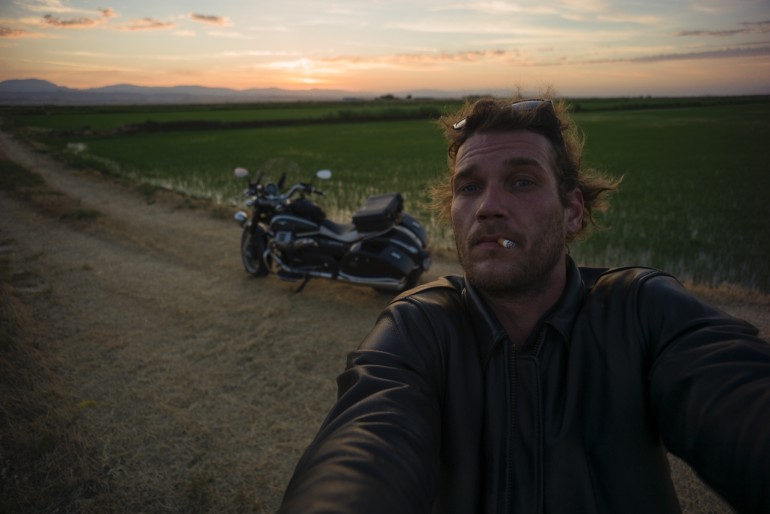 I don't know why i'm already looking so rough. This was only 8 hours into the journey from LA in day one. Pinnacle sunset, pinnacle bike and a haggard man. Plenty more pinnacle vibrations ahead.

Selfie and the horse I rode in on. 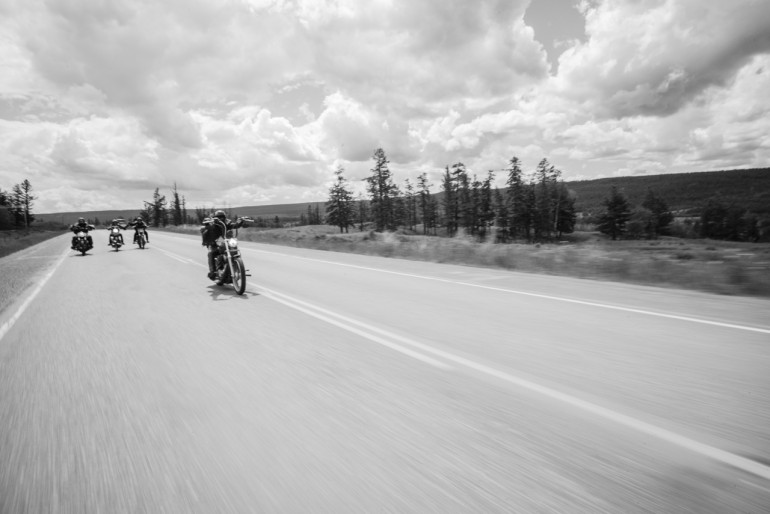 These are the road warriors. Patrick O'Dell on the left, Harvey Foster and "Beans" holding hands in the spirit of Canadian chopper brotherhood, and Kynan Tait in the lead, swatting flies for the bros behind. 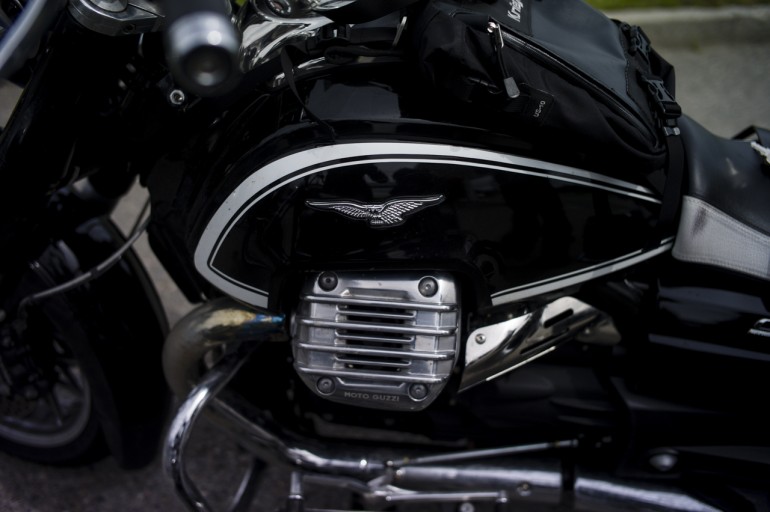 The Guzzi — pictured here still fairly clean — has many miles of rough road ahead of it. 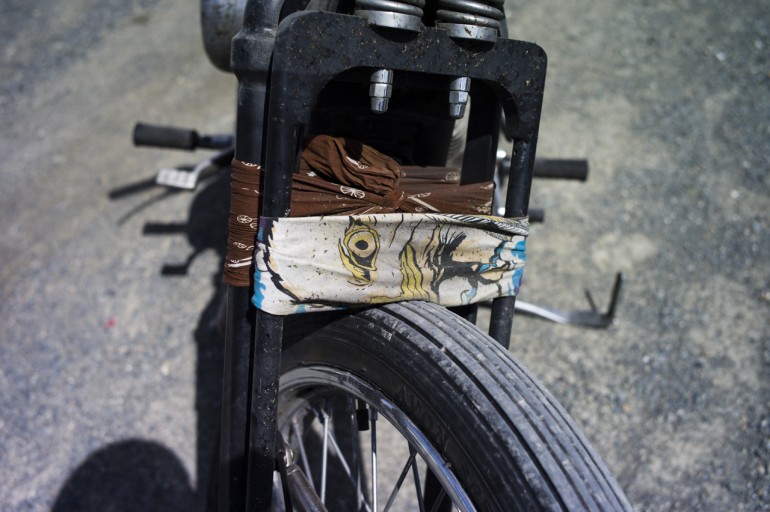 Chopper rules dictate the elimination of all frivolous pieces and apparently, that means fenders are verboten. This is Harvey's front fender rig up before riding into rain. Respect! 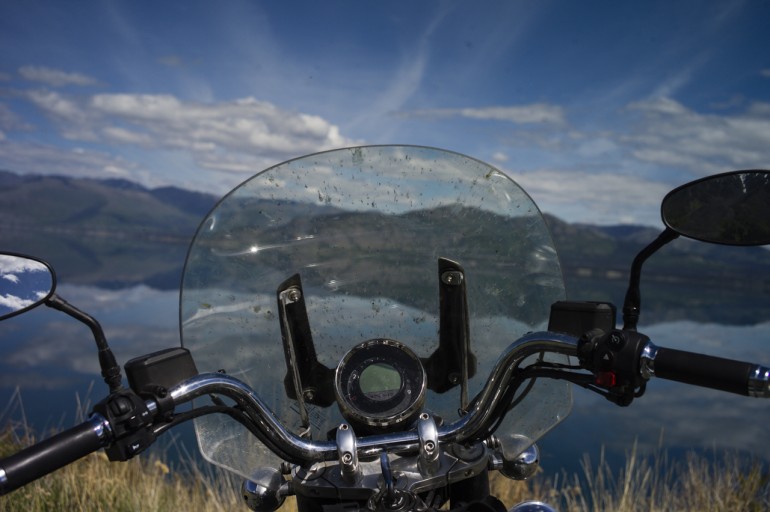 Mine was the only bike on the trip with a windscreen. One look at the carnage onboard and you start to get an idea what the other guys faces were absorbing. 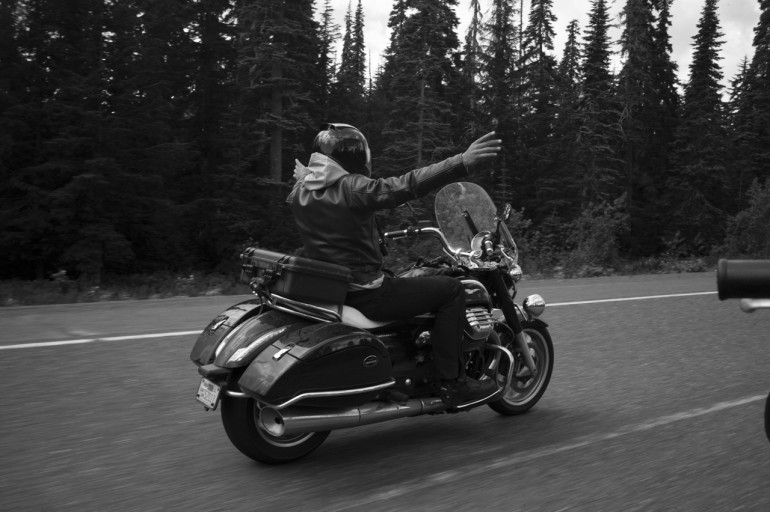 Feeling the vibrations of the open road on a Guzzi California 1400. 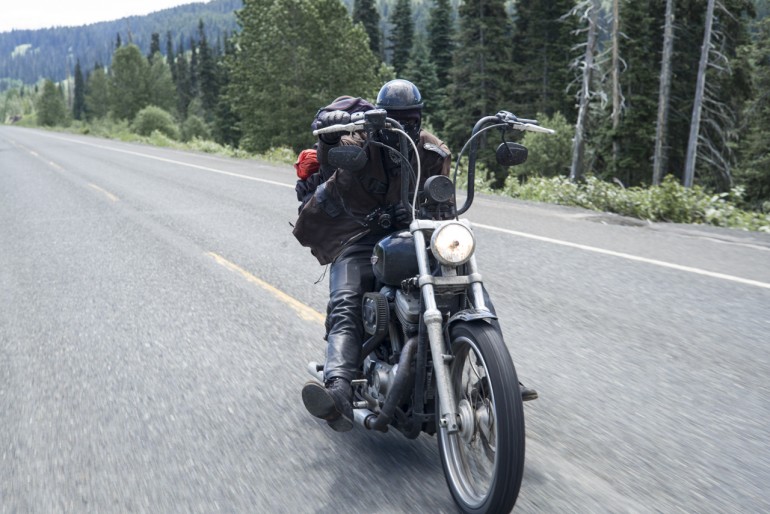 Andrew Kynan Tait, certified Canadian badass/nomad/all-round creator of apex vibrations. in his leathers, somewhere on the Alcan highway. He was the quiet voice of reason on the trip. Cool as a cucumber at all times, regardless of the situation. 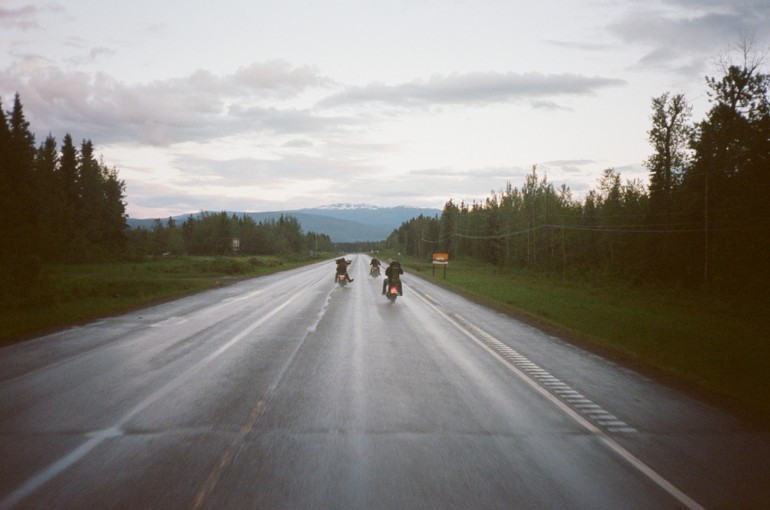 Just south of Burns Lake, BC was our first encounter with rain and, by some miracle, it only lasted for about an hour. The roads get gradually worse the further north you go with pot holes, unmarked gravel and random wildlife that can run on to the road at any given moment. Your best bet is to slow down and take it all in even, though you might be completely soaked. This is the moment of relief when the clouds open up, you can see the road again and you know the rain will finally let up. 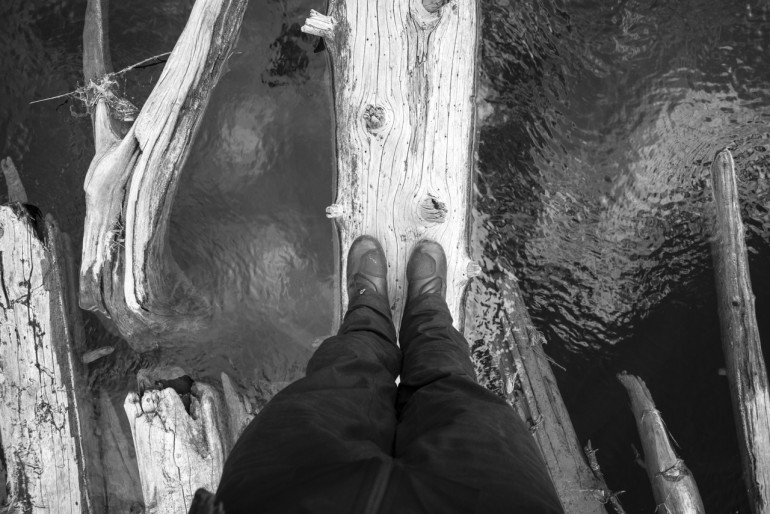 Log pile selfie in Whistler, BC. These Alpinestars pants and riding boots made daily life a lot more bearable. Three weeks on the road and I was never wet once. No one else on the trip had anything close to resembling appropriate riding gear and, when the weather turned bad, they were completely miserable. I was riding in absolute comfort. Shortly after this was taken, I lost my balance and stepped in the water. I was still dry. 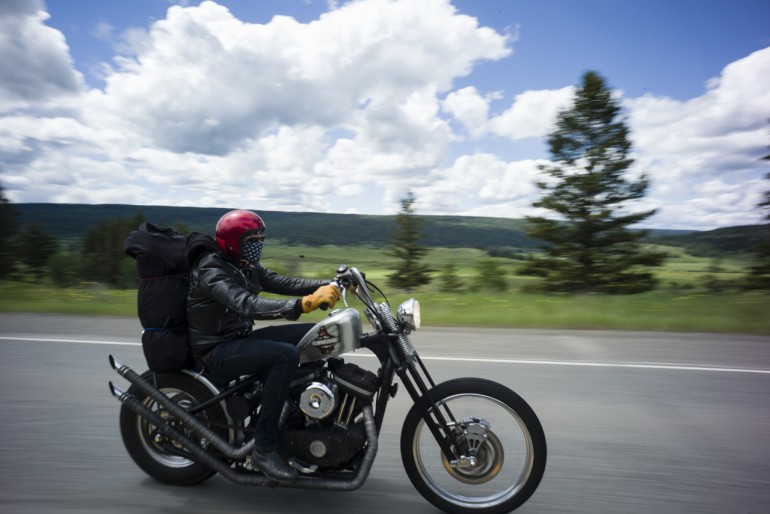 Harvey Foster on a hardtail chopper that he built himself from scratch with a bored-out Harley motor. He looks fairly relaxed in this photo but often, when you'd pass him, you could see him screaming to the highway gods cursing his rigid machine. Certified Canadian, wildly born badass. 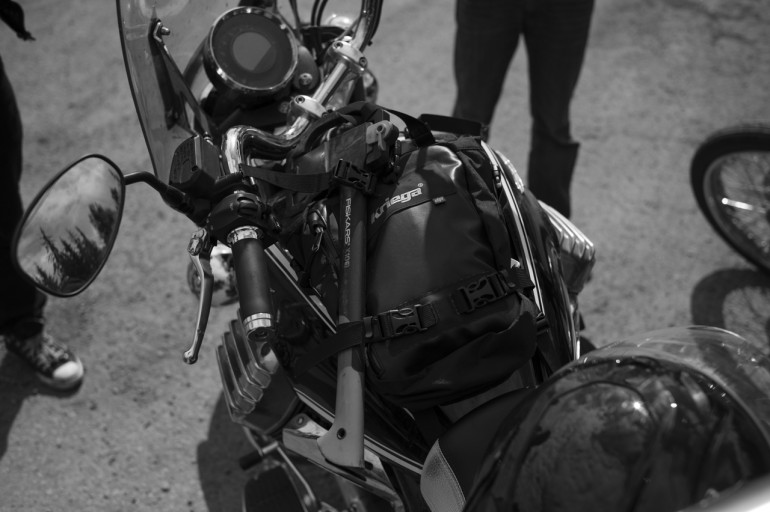 Going on long distance trips, you want to eliminate all possible variables. Fiskars for security and Kriega tank bag for all important personal belongings. 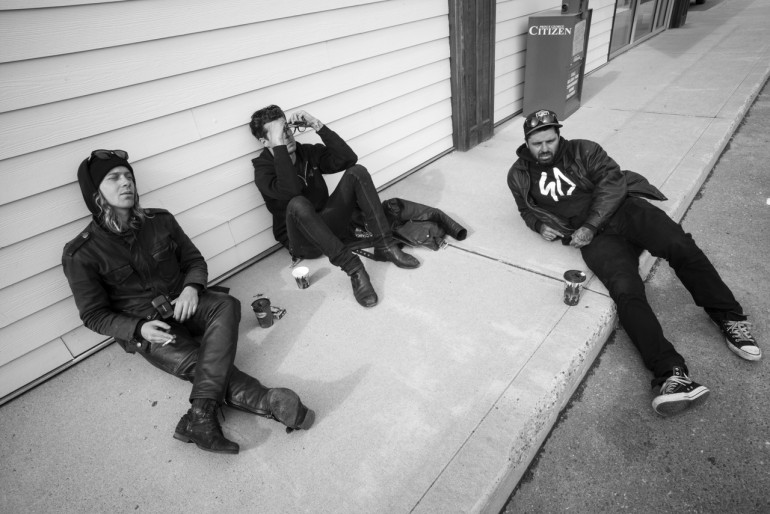 Prince George citizens. Still in civilization, following breakfast at the Canadian Church, Tim Horton's, weary to be back on the road. Laying around motionless on concrete, at that point, was a welcome respite. 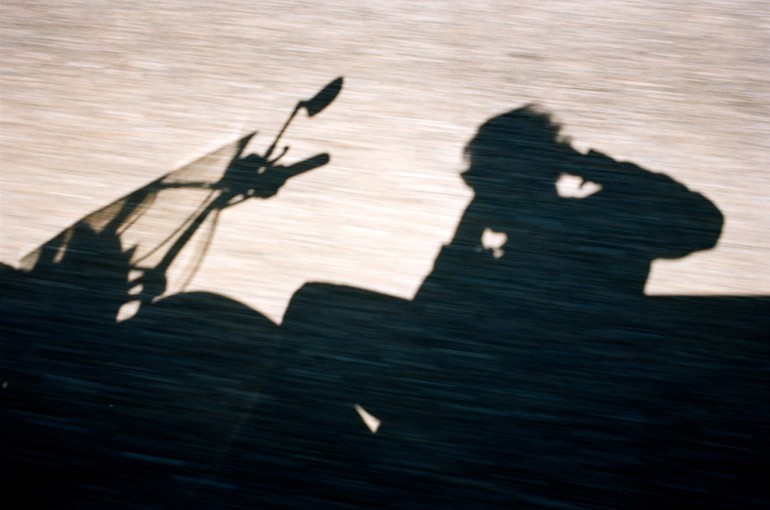 There are no helmet laws in Alaska and during the summer, it is nice to able to cruise the country with out any restriction on your senses of epic vibrations. 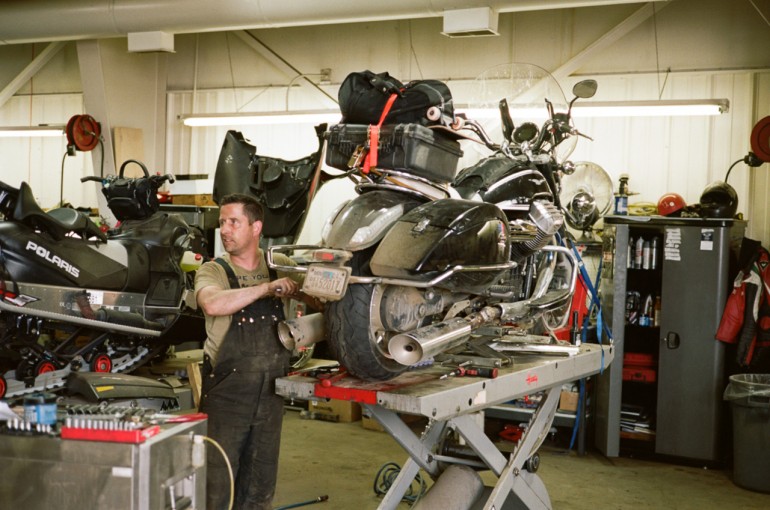 This is Chuck from Alaska Cycle Center in Anchorage. Because the Guzzi was brand new, it was overdue for the first factory tune-up. I thought for sure it was going to go through the ringer, but the filters were surprisingly clean. I rode in with a bolt sticking out of a flat rear tire but beside that, all it needed was an oil change. This bike handled the Alaskan roads like a dream. 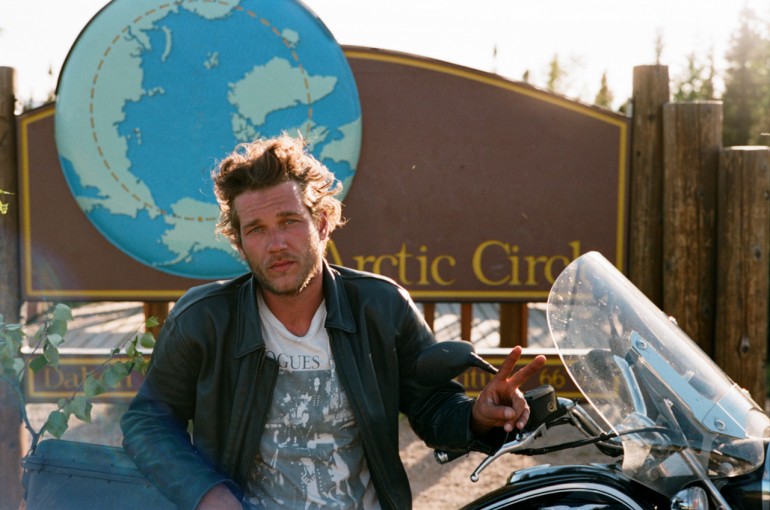 One of the greatest things about riding this far north is that the sun never sets. It's easy to ride longer and farther without realizing how far you've gone or what time it is. This photo was taken at 1am after nine days of nearly constant charging from Los Angeles. There was a lot of stoke in the air and maybe even a little in my face, although it's hard to see. I was extremely tired and haggard, but mostly, I was just happy to have made it. It was 312 km from Fairbanks to the Arctic Circle on a gravel pathway that occasionally resembled a road. If my memory serves me correctly, we got back to Fairbanks at 6am later that morning. It was a 14 hour round trip, all in blazing daylight. 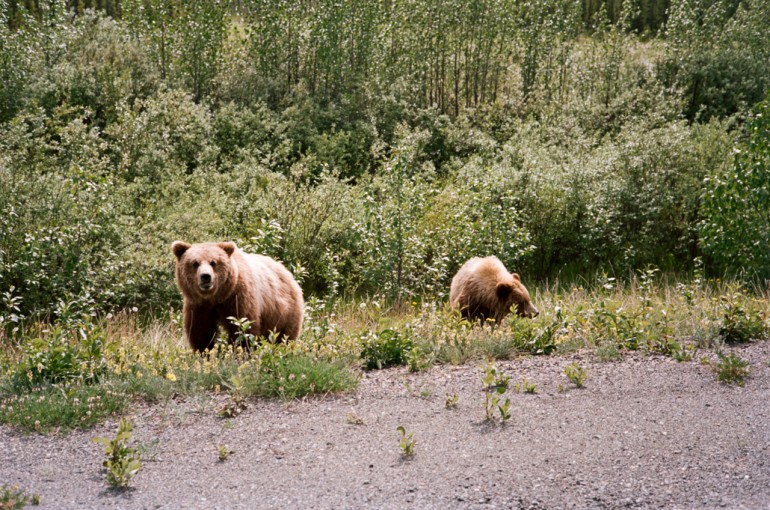 The bears. They seems like they're fairly friendly, fluffy creatures but I wouldn't advise testing that theory. This is a taste of what the Alaskan roadside can look like at any given moment; they're everywhere. 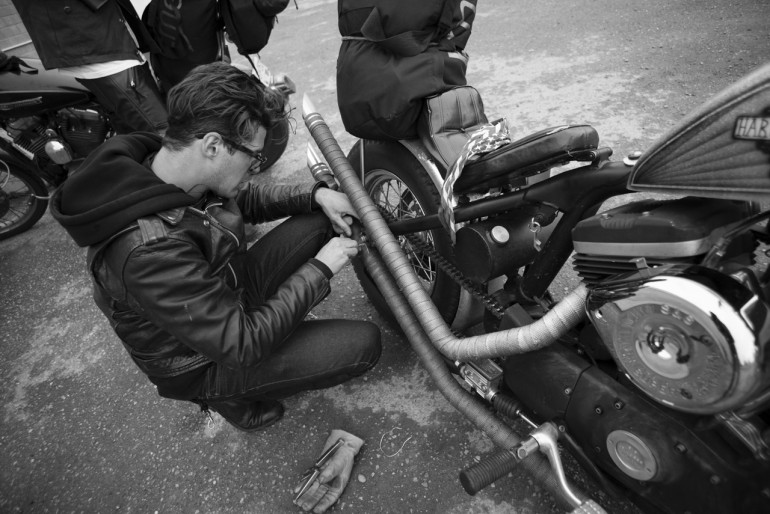 The pipes. I don't think there was a bathroom, ciggy or gas stop without Harvey fixing his pipes. Now that I think of it, I'm not sure if they were ever even welded on in the first place. Some sort of a metal wire jimmy rig going on here. One of any amusing and humbling moments watching Harvey fix his chopper. 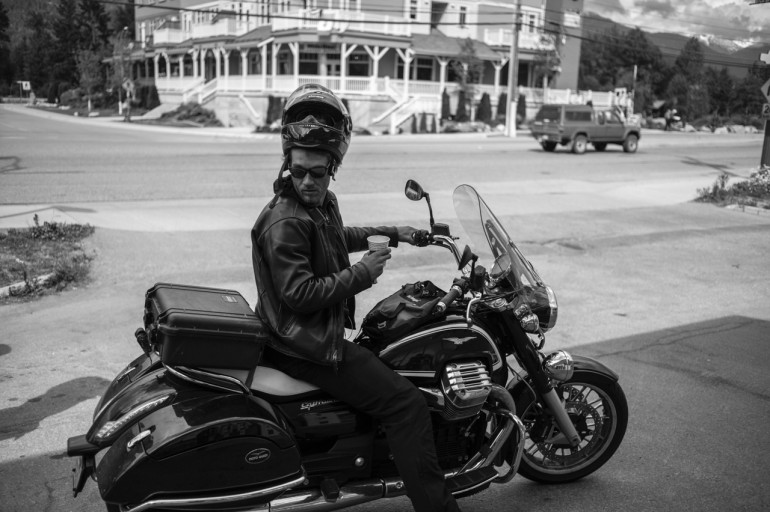 The Guzzi does not have a reverse gear, so I had to put it into manual override for a reverse latte at one of the many caffeine intake fueling stations. 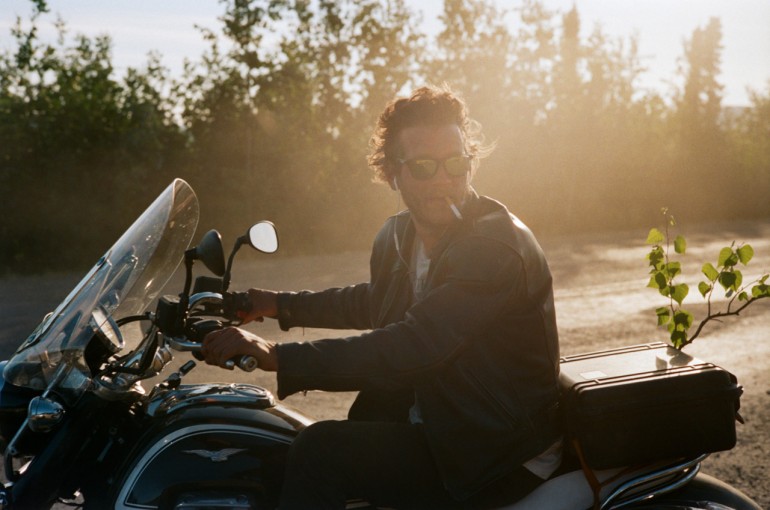 One of the worst things about riding this far north is that you're going to be swarmed by mosquitos the moment you stop. Because I wasn't wearing a helmet, it's anyone's guess as to how many I ate. This was taken just after leaving the Arctic Circle, headed back to Fairbanks. The scenery up there reminded me of Lapland in my native Finland. I had been flying a Canadian flag on the back of my bike before losing it somewhere along the road, so I grabbed this birch branch to substitute for a Finnish flag; a little reminder of home. 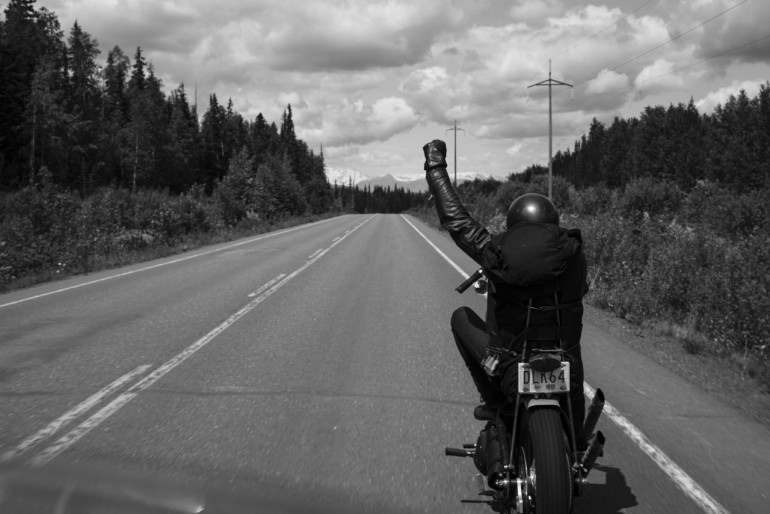 Most hours of the day, Harvey was in absolute agony on the hardtail. There were a few moments of stoke and comfort when we would hit a smooth stretch of road, especially when we were nearing the Alaskan boarder. Victory of surviving another unpaved stretch of tarmac.

That's my epic road trip. What was yours?