Watson On: My Craigslist Triumph 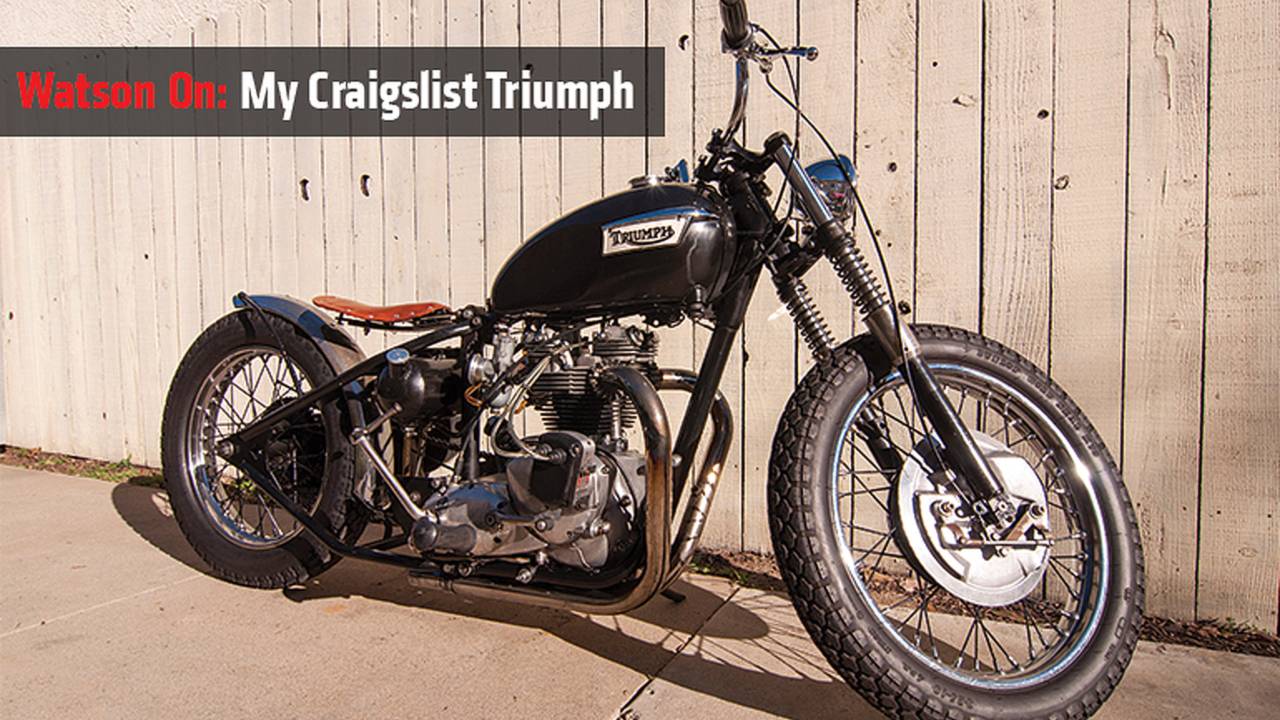 Waston scours the classifieds to add another bike to his stable leading him to discover his ideal Craigslist Triumph.

This past week I have been burnt, kicked very hard in the shins and am now also cut and bruised. I have also been electrocuted, soaked in gasoline and to cap it all some guy took all my money.

I’m probably making this sound like a street mugging, some people might agree that’s precisely what it is, but after months of searching I’ve found what I was looking for in a second bike

Some of you may recall that I was searching for something old, with straight forward mechanicals and completely different from my every day Harley-Davidson ride. It also had to at least be running, but with room for improvement so I could work on it over time. I was thinking something British, such as a BSA, Triumph or a Norton, as this would mean I could find parts and technical help if things got completely beyond me.

I spent hours scouring the classified ads of local newspapers and eBay. Laughing at the ridiculous prices people wanted for a pile of mis-matched parts that came with a salvage title and the promise that the bike started last time it was used. Everything I saw was either well out of my price range, or looked suspiciously like it had been stolen.

Then last week an ad popped up on Craigslist. Someone just round the corner from me had a 1970 Triumph Bonneville bobber that on the face of it seemed like an interesting bike. The owner said he’d owned it for three years and had spent some money and time on it. The brakes had been overhauled, the engine re-bored and, according to the ad, the bike started first time. More importantly, it was also in my price range.

Apparently Craigslist has become the social media network for mass murderers and serial killers to meet their victims, which is why the Triumph’s owner and I agreed to meet in a public place with lots of people about. So, I ended up at a nearby gas station checking over an elderly British motorcycle.

The Triumph’s owner had got there first, which was clearly a good sign that the bike ran and when I looked it over, I quickly realized that this was going to be the bike for me. It was in no way perfect but things that needed to work appeared to do just that. Nothing was falling off and I was strangely reassured to see the engine was leaking oil from all the places you’d expect from an old British bike.

Everything the owner had told me in his e-mail stacked up. I was not concerned that whilst the frame is a 1970 Bonneville the engine is from a 1972. I was not looking for perfection, I just wanted a second motorcycle that would be fun to ride and work on. We discussed price and I made an offer. The next thing I knew I had a Triumph Bonneville motorcycle sitting on my driveway.

Part of our deal consisted of the former owner taking some time to go over the bike with me to explain its quirks and how to do some fundamental things like starting it.

As this is an early 1970’s Triumph it still has the magneto running off the side of the engine block and has no electric start. On one hand it looks cool and when you park the bike up you take one of the leads with you to stop the bike being started. Although I reckon that a couple of husky guys could quite easily lift the entire bike up and put it in the back of a pickup and take it away if they wanted to.

On the downside the magneto means you have no choice but to kick-start the old girl to get her going. That, my friends, is a pain in more ways than one. The owner took me through the starting process before he handed the bike to me. I paid attention on how to prime the twin Amal carbs until fuel dribbled out of them. On no account should I touch the throttle until the bike was started and the rest was up to me and a six-inch piece of metal laughingly called a kick-start.

I spent my first afternoon with my new/old Triumph flooding the engine, discovering that if you don’t time the kick quite right the compression will hurl you unexpectedly off the bike and onto the ground. While the chrome oil filler cap may look cool it is directly in line with my knee, which is why I have a multi colored bruise the size of an orange on my right leg.

I am  proud to say, however, I did get the bike going and took it up the road. As it’s British the gear lever is on the right and the brake is on the left, which messed with my mind for a few minutes. But it ran really well, stopped surprisingly well and sounded fantastic. I ‘m guessing here, but it probably weighs in at around 350 -370lbs, as there’s nothing to it apart from a saddle, engine and frame. Consequently it felt astonishingly light compared to my big, heavy Harley-Davidson.

Once I got settled in and riding, I felt like I was doing 100mph but it was probably no more than 50mph. There’s no way of accurately knowing as currently there’s no speedo. I also felt extremely exposed on it but loved how nimble and direct it feels on the move.

It was also at about this point my right knee touched the top of the right spark plug. I received a stab of electricity through my body, which I can confirm definitely focuses your attention. I may have to do something about that.

For the moment though, once the bruises and other injuries have healed, I am looking forward to what I can do with this Triumph. The list is endless. But for now you will all have to excuse me as I have blocked out my calendar this morning and possibly the rest of the day because there is a motorcycle outside that I need to go and kick-start.

What project gems have you purchased on Craigslist?