Yamaha Doubles Down on Triples in Tokyo 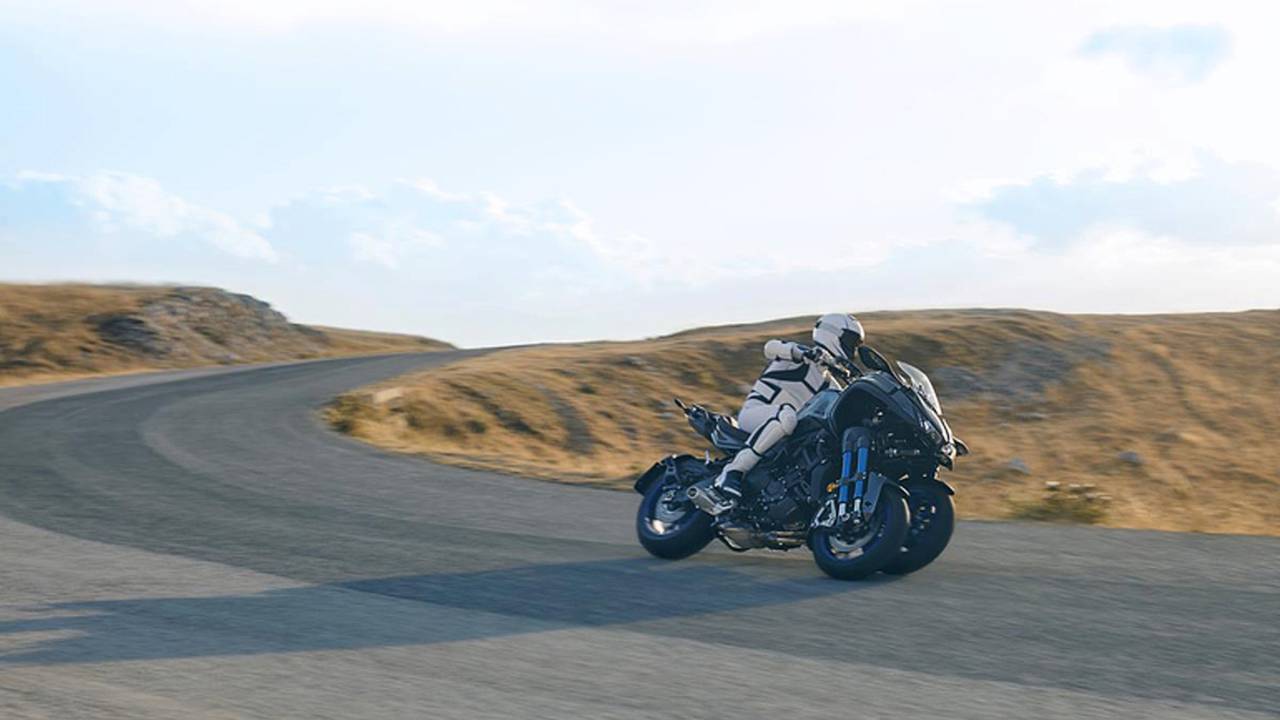 Yamaha will reveal the Niken at the Tokyo Motor Show, a 3-wheeled sport trike with dual leaning front wheels.

We're all familiar with Yamaha's affinity for things that come in groups of three, right? Three tuning forks in the company's logo, three cylinder engines in its greatest bikes, three wheels on its new bi...wait, what? That's right! The news out of Japan is that Yamaha has gone completely crazy about groups of three and has the concept vehicles to prove it.

The corporate theme at the upcoming Tokyo Motor Show is "Yamaha Future Garage: Resonate the Future." The company’s booth will display a 20-model array of concept and production models, including six world premiere models and four Japan premiere models.

The array of futurism includes a prototype car, electric bicycles and scooters, and the big news double triple Niken, a vehicle that Yamaha calls a “leaning multi-wheeler.” The tilting trike uses a an MT09 chassis aft of the steering head, but like the Piaggio MP3, carries two front wheels that lean into turns. Hmm.

Director Cope speculates that the 15-inch front wheels (and limited tire selection) suggest a final product aimed at more urban applications rather than a high-performance sportbike. I think not, since Yamaha already has the TriCity 155 for use around town. The wheel size was probably determined in testing as the best combination of straight line stability, turn-in effort, tracking compliance, steering geometry, coefficient of friction, and such like. Tire selection will probably be determined by market demand.

While the Niken is obviously Yamaha’s most dramatic reveal in Tokyo, the company has other equally impressive tricks up its sleve. One standout is the Motoroid, a proof-of-concept exercise that “employs artificial intelligence and explores creating new forms of personal mobility in which the rider resonates harmoniously with the machine.” That harmonious resonating derives from the experience of Kando, a Japanese word meaning “simultaneous feelings of deep satisfaction and intense excitement that we experience when we encounter something of exceptional value.”

But back to the three-wheelers. The Tritown is an electric trike/scooter/skateboard that’s ridden standing up. Designed for last-mile mobility, the Tritown is aimed at urban workers who may not have the luxury of parking their cars near the office. The ability to slip through congested traffic and get to work on time has a certain appeal, and the transporter includes the ability to remain upright at a stop with the rider aboard.

The ABS-equipped TriCity 155 is described as the next step in scooters, with a sporty ride as well as great feeling of stability, and innovative styling. With added performance and features that heighten pride of ownership, this model can be ridden on expressways and expands the appeal of Yamaha's Leaning Multi-Wheel (LMW) world.

Adding yet another wheel is the MWC-4, which incorporates the Yamaha concept of Half-Sized Mobility. Also a leaner, The MWC-4 is powered by electric motors and a gasoline engine for range-extending power generation, and uses something called attitude-control technology, which gives it, as Yamaha says, "a ride that feels like nothing else and a level of comfort not found with a conventional motorcycle.” Yamaha has yet to specify what gas engine is used, but does state that the two electric motors are liquid-cooled.

The Cross-Hub Concept represents Yamaha’s approach to mobility with a high fun factor, and in offering personal transport that combines practical everyday use while doubling as a choice for those with “active lifestyles.” The diamond-shaped seating layout for the cabin provides a compact vehicle package but also the capacity to carry up to two motorcycles in the rear.

The Cross-Hub looks like a Dodge Deora and a Pontiac Stinger had a baby.

In the bicycle realm, Yamaha’s YPJ series are model proposals bringing new value to electrically power-assisted bicycles (e-bikes). Based on the YPJ-MTB Concept model exhibited at the Tokyo Motor Show two years ago, 2015, the YPJ-XC is now closer to production. All the YPJ e-bikes now have a new motor with increased power and range.

The new YZF-R6 reflects the first major update for the 600 in nine years, designed to refine the popular sporty’s performance on the road and track. The styling derives directly from Yamaha's latest R-Series models, with new electronics and components from developing the YZF-R1.

The new XSR700 ABS, which Yamaha has been tantalizing sportbike fans with for a while, is also on display in Tokyo ahead of its Japanese release in the beginning of November. It offers performance for a relaxed and casual ride — even in city traffic — balanced with a body design aimed at stimulating the owner's imagination for possible customization.