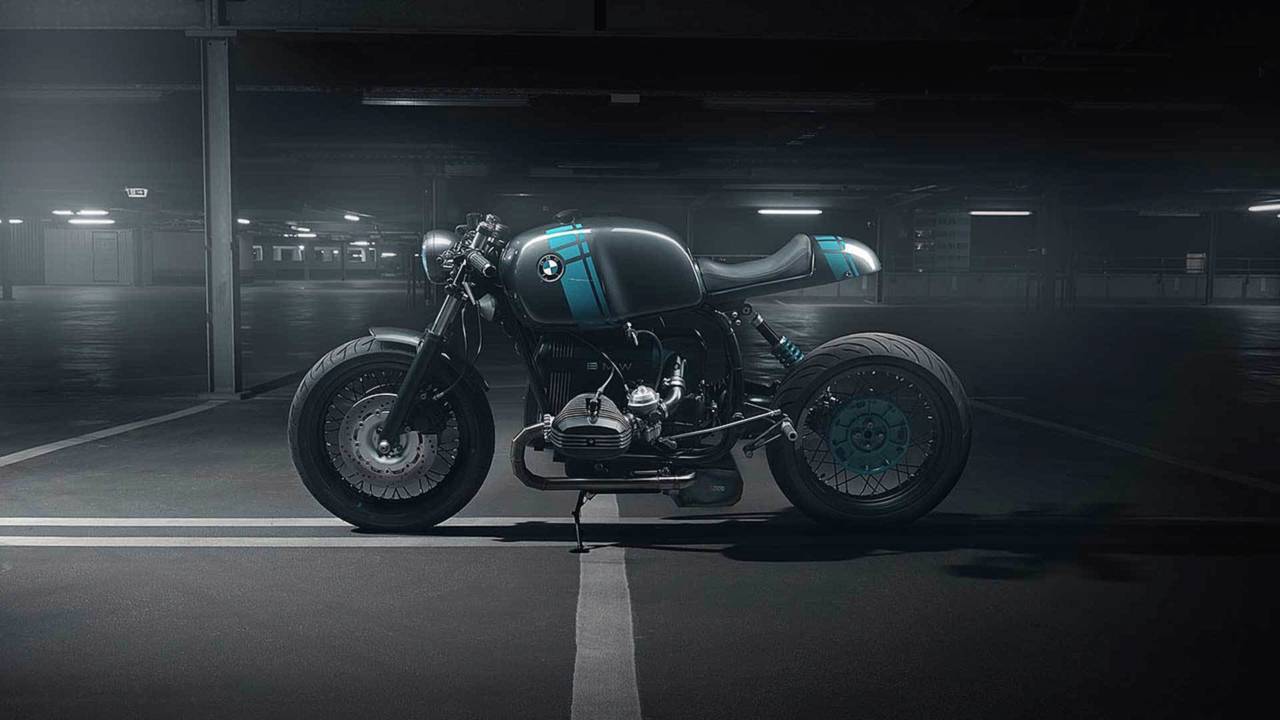 Germany's Elemental Cycles took a humble BMW R80, threw some magic at it, and came up with the stunning gray and blue Project #4 Cafe Racer.

Project #4 is an elemental take on a classic BMW airhead

Elemental Custom Cycles of Neustadt, Germany, created a stunning cafe racer out of a humble but solid 1985 BMW R80 Monolever. Customizing a vintage BMW is no easy task, socially, financially, or technically. I speak from experience on this very topic.

First, a bit of history. BMW air cooled twins or "airheads" date back to 1923. At the time pioneering the idea of fully integrated motorcycle design. Most 1920's motorcycles and some produced decades later were collections of parts and compromises assembled into a machine. BMW's integrated design created an extremely competent bike that lived for nearly 60 years with minimal engineering changes.

To customize the 60 year old integrated perfection of a BMW motorcycle without turning it into a collection of odd parts requires true technical insight. Elemental Custom Cycles succeeded with Project 4, the codename for the bike featured here. This 1985 R80 Monolever is from the last batch of traditional airheads made. Cutting up airheads is dangerous to your BMW club membership card. Doing so is not the "plug the welder in next to the beer cooler" school of bike building. Let's talk cost for a moment, while I don't have the figures for this build, a similar project years I was involved in years ago that had us changing BMW's design integration pushed build costs to five figures very quickly. One simple change, say swapping handlebars, means everything remotely related must be tweaked. As I study the solutions that ECC found to the same problems I dealt with, serious money spent is obvious.

ECC managed to give the usually staid R80 an extremely racy stance.

The bike's owner approached ECC with the idea of building a minimalist cafe racer with show quality looks and real world capability. That last one is key, as Germany's tight TUV use regulations forbid changes that impair vehicle operation or public safety. Lights, brakes, tires, suspension—everything must pass stringent muster with the inspector. No motocross tires or tuna can brakes are allowed on German roads.

To start, ECC staff found a stock BMW R80 nearby and purchased it immediately. The crew completely stripped the bike even though recorded mileage was under 10,000 km. That's barely break-in mileage for this engine, but nothing was left to chance. The monolever frame is brilliantly minimal and allows lots of sunlight to shine through, so ECC largely left it alone. The rear subframe is fromm ECC's own workshop, and fixes the problem of unifying a very large Paris-Dakar fuel tank with a flat seat.

Project 4 rolls on 17 inch wheels—120mm up front and 150mm out back. These wheels were, according to ECC, not easy to source but were clearly worth the effort. The slightly narrower tire up front looks right, and allows for a mild self centering effect in the steering. This is an important point to understand with vintage bike handling and BMWs in particular. A too wide tire up front reduces the self centering effect and makes the bike steer like a wheelbarrow.

A whole lot of thought was clearly put into the wheels and tires.

The Forks were shortened 50mm to get a modern drop-down look and more tilt from the fuel tank. A stainless header flows into a ECC built muffler under the motor to vent gasses from the old boxer. Electrical controls are push button and managed by a Motogadget "M" unit. The fuel cell is borrowed from the GS model and topped off by a Monza cap.

The 797cc Bavarian power unit is good for 49.5 horsepower. That may not sound like a lot, but in this light chassis it's faster than you might think. This is a bike that can get there quickly, very quickly without drama or fatigue, and looks great at the pub when your ride is finished. The metallic grey with blue highlights were the subject of some 40 different color schemes considered by the EEC crew. I like it. The grey is very German, yet the angular blue highlights remind me of that final batch of John Player Norton Commandos produced in 1975.

It even looks fantastic from behind.

I have two questions for ECC. First, where is the battery? BMWs require a hefty battery and the stock charging system is one the few areas of an airhead that is, um, only so-so. Top-notch aftermarket systems are available and widely used, but they all come with a big red warning in several languages advising against "Lithium type" batteries. Please share the secret!

OF THE WEEK: Bike of the Week: Gonzo Moto's Odin's Fury

Second the tilt of the big tank is a magnificent styling move, but I'm running on empty kind of guy. Is all the gas available if needed? These are not criticisms by any means, just a burning need to know from a guy who has been there. If I were to win the lottery, my second phone call—after telling my wife, "Honey we're going to Germany,"—is to the crew at Elemental Custom Cycles. This is one custom bike that I really want, and I happen to know the location of a perfect donor R100.