La Motocyclette at The Geffen Contemporary: A Women Who Ride Profile 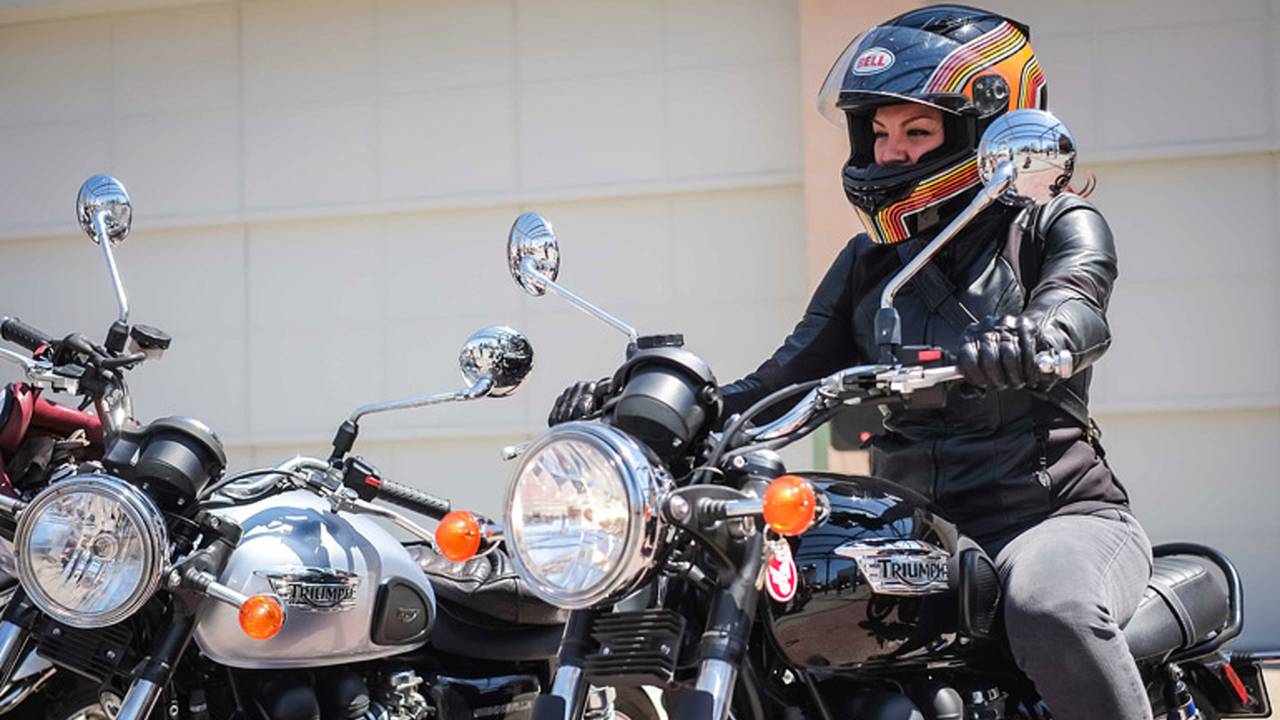 In the middle of April, I found myself at the Geffen Contemporary Museum in Downtown Los Angeles for the launch of La Motocyclette: Issue Four, an independently published magazine that highlights the remarkable and bourgeoning contingent of women motorcyclists taking to the streets, race tracks, and seeking adventure throughout the great American frontier.

With a coffee in one hand and my camera slung around my side, I took out my notepad in preparation for my interview with Lynda Lucas, the editor and founder of La Motocyclette. Before getting down to business I casually inspected the row of vintage and modern Honda’s, Triumph’s and Harley-Davidson’s parked outside the museum and struck up a few conversations with attendees about motorcycles, life, work and any other number of topics that were fair game for the day.

MUST READ:  10 Reasons Why You Should Date a Woman Who Rides A Motorcycle | RideApart

Having never met Lynda in person, I inquired with a few people as to her whereabouts. A member of the East Side Moto Babes, a local motorcycle group based out of East Los Angeles, leaned over and pointed her out.

“She is over there with the big hair and horned rimed glasses.”

I walked over and introduced myself. Lynda returned the favor, stood up and introduced herself. Dressed in a fitted black shirt and blue jeans, standing 5’8” with a slender build, “big” auburn hair, horned rimed glassed, and youthful energy, she greeted me with a smile. I wasn't sure what I was expecting, but in a largely male-dominated industry, this 29 year-old editor and motorcyclist was nothing I had envisioned...and that’s kind of the point. Women motorcyclists are very much redefining their role in modern American motorcycle culture. It's what drew me to come to speak with Lynda today.

RideApart:Tell me a bit about La Motocyclette how did it come about?

LYNDA: La Moto originally started here at MOCA in Los Angeles two years ago with a former collaborator and friend Cortney Cassidy. We were collaborating at the time together as an art duo called CCOOLL. We decided to make a ‘zine about women motorcyclists. At first it was like pulling teeth to obtain content, so I started by featuring my girlfriend riders. I think the first issue had only ten people in it, and we launched that first issue at the LA Art Book Fair two years ago. From there, it just blew up and a lot of people started paying attention to it and submitting content.

RA:There is a bit of a paradigm shift occurring as of recently toward women in motorcycling. Has that contributed to the success and reception of La Motocyclette?

LYNDA: There is and I believe it is why the magazine is getting as much traction as it is. There has been a boom recently in riding culture and women are playing a role in redefining what it means to be a motorcyclist in the 21st century, but women continue to be an overwhelmingly neglected market by the motorcycle industry. It was never our primary intention, but we are confronting a lot of social issues surrounding women riders and reporting a narrative that is very journalistic. I think being a publication that knocks down misconceptions and exposes readers to a growing world of women riders is what has enabled and contributed to our success.

RA: How many women have you interviewed for La Moto / La Motocyclette?

LYNDA: So far I have had the good fortune of interviewing over 100 women riders from different walks of life, demographics, and from all over the world and each of their stories are inspiring and unique. From vintage bike enthusiasts, to extreme long distance riders, professional racers, builders, designers, to total newbies.

RA: In interviewing so many women riders, what topic or issue do you feel comes up the most?

LYNDA: The issue that comes up most frequently is the overwhelming lack of well-made riding gear that is stylish, functional, and tailored specifically for women. What’s already available out there already often takes a “pink it or shrink it” tactic and is generally horrible.

On the positive end, a theme that is most prevalent is how motorcycling has given specifically women a sense of strength and empowerment. It’s an activity and lifestyle that forces one to reflect on one’s self and overcome a lot of fears. When you are forced to push against the boundaries of what you think you’re capable of every day, that’s something that changes who you are forever. It changes the character of your soul.

RA: What is one of the more inspiring interviews that stick out in your mind?

LYNDA: There are so many but I think the most emblematic was with Shelina Moreda, a woman pro-racer. Shelina was racing, and there was a little girl touring the pits with her father when Shelina pulls in from the track on her race bike. When racers are in full leather with a helmet on we all look the same. It’s very difficult to distinguish gender. Shelina takes off her helmet in front of this little girl and the wide-eyed look of joy, inspiration, and recognition on this little girl’s face was priceless. It’s that moment, the moment that the boundaries of what that little girl realized she would be capable of striving for in the future expanded, that’s a universe expanding moment for a woman.

Another of my favorite interviews was in the most recent issue, I got the honor of interviewing Keyria Doughty, aka Wheelie Queen, only female member of the Baltimore gang 12 O’Clock Boys. She shared with me the story of how her father bought her first motorcycle before he passed away, how riding motorcycles and her father’s belief in her has changed her life and allowed her to accomplish things she wouldn’t have otherwise. Those are the kind of meaningful narratives that really need to be documented.

RA: What is the goal for La Motocyclette?

LYNDA: I see La Motocyclette as a platform for women to share their stories and eventually becoming a community for women worldwide. I really feel there is this renaissance occurring for the women motorcyclist in riding culture right now and I feel its important to share these narratives within the community. The zine serves to inspire girls, women, men, anyone…to say, “I can do that too” and it tells this diverse range of individual stories in the process.

RA: Where can I purchase a copy or find out more about La Motocyclette?

LYNDA: For full list of stockists, check out our website www.lamotocyclette.com or you can purchase through our online store http://lamotocyclette.bigcartel.com

Sam Bendall // @LiveMotoFoto is a native Southern Californian. He enjoys coffee, whiskey, photography, motorcycles, camping and travel, but not necessarily in that order. His favorite food is Mexican and Italian because it is delicious, easy to make, but difficult to perfect. He received his BA in Communication Studies with a minor in Photojournalism from Cal State Northridge.