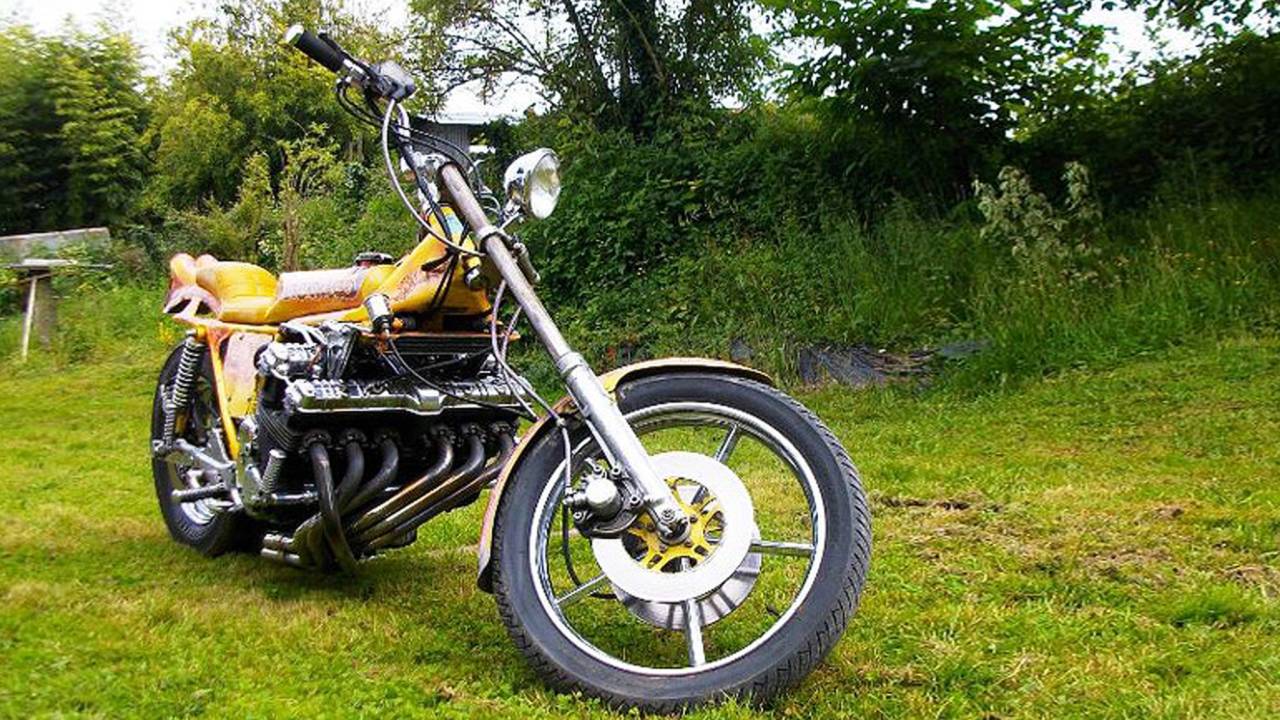 Online Find eBay Edition – The Joy of CBXFor chopper guys nothing succeeds like excess, and the air cooled inline 6 cylinder Honda CBX is about the...

For chopper guys nothing succeeds like excess, and the air cooled inline 6 cylinder Honda CBX is about the most excessive looking motor you can find. This week’s eBay Online Find is a back in the day custom that is a little bit chopper, a little bit café racer, powered by a CBX and found in France with little to no history.

I can tell you the Honda CBX six was created as an engineering tour de force by Honda in celebration of their multi-cylinder bikes, which they first appeared on the track with in the 1960s. The CBX made good power, but it made great noises and it made every other guy at the hamburger stand suddenly feel inadequate. Back in the day, they made about 105hp and weighed over 600lbs. They were one of the fastest bikes of the late 1970s.

I guess they also had the power to cloud men's minds too according to the copy in the magazine ad.

From this bike's vintage Koni shocks and rare Invader wheels, you'd have to believe this was built in 1979 when the bike was new. Also, because nobody at any other time would have applied that paint job. I personally see a little Brough Superior influence in the dual cylindrical fuel tanks, so I would guess it was built in Europe, and not imported from an American chopper builder.

So, this bike appears to be a survivor, and was likely a show bike of some sort from the 1970s. I did find a video of a couple of guys fiddling with it in a car park, but there is no information with it. All you learn from it is that these bikes still sound awesome, and bike type guys are universal worldwide, this could be anywhere USA (except for the Peugeot van).

With a starting bid of $10k and nearly no information from the seller, I doubt this is going to sell. Unless someone sees it online, and recognizes it from back in the day, it's really too weird for the price.

You can find the eBay listing here but here is the complete copy from it:

"This superb survivor is for sale in France and will ship worldwide. This is a first year of production of the CBX 6 cylinders 1979. The paint is gold leafed and has a great pâtina!!!!  Motor was recently overhauled, and so were the brakes and the wheel bearings... The wheels are rare Invaders 15" and 19"! More than 8000€ invoice available. Bike handles great, the sound is absolutely fantastic!!!!!!!! It will travel any distance!!!!"

The seller claims it will travel any distance, so book a ticket to France and ride it home.