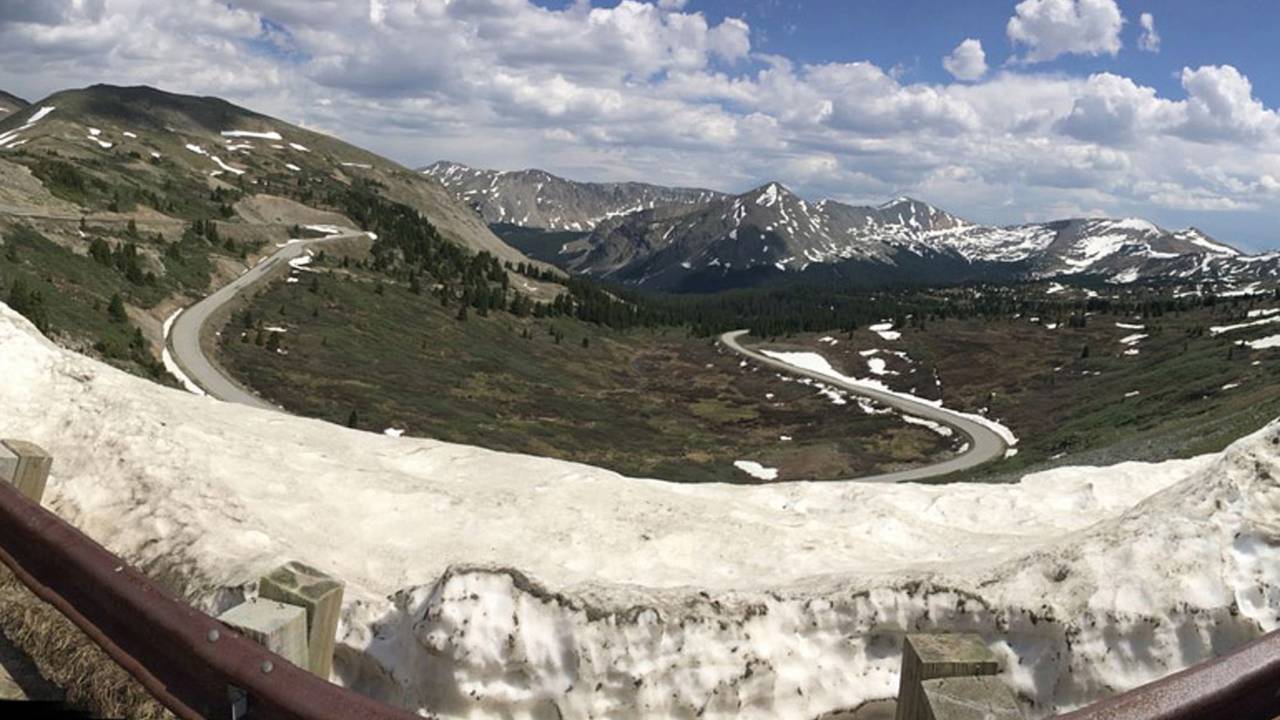 First person account of the week leading up to the PPIHC 2015. A birthday ride in the Colorado Rockies with my brother.

The voices in my head woke me at 3:55 am and would not leave me alone. It was Tuesday and I tried to ignore them, but they just got louder.

My first mistake was to leave the house without making coffee, even though I had plenty of time. How is it that a key component for making critical decisions that early in the day could be a critical decision itself?

This is a universal oversight and I will write a stern letter stating my disapproval.

I stumbled into the garage and was immediately faced with another critical decision. Triumph or BMW, Vintage, or Modern? Street, Scrambler, or Sport? The R90/6 was closest to the door and already had a locking top case on it.

The third and final critical decision was now destined for failure. Stop for gas? I’m sure you can guess.

5:05am – Now pushing the R90 uphill on I-25—all forward progress halted—I considered my options. Calling my wife was not one of them. To be fair, one would expect the reserve to last beyond 10 miles, but that's for another day. I do know that I can push a vintage BMW exactly 2.37 miles up a 6% grade, at an elevation of 7343’. Greenland exit to Monument Hill.

6:06am - When the truck with the Yamaha FZR 400 on the rear bumper stopped, it reaffirmed that there is a God. The driver turned out to be a fellow moto journalist and he was running even later than I. Like me, he was headed to America’s Mountain to cover PPIHC. After trying unsuccessfully to justify my situation, I looked into a culvert for a jug. I felt exactly like the rotting deer down there. She appeared as having an unfortunate encounter a day or two earlier with a Peterbuilt. Luckily, the man from Boulder saved me from having to jump down there, handing me both a juice jar and a rubber hose from the back of his truck.

I’d forgotten that gasoline really does make your lips numb.

The early morning cardio workout had sharpened my senses and cleansed my soul. I stopped at the first exit to put fuel in the Beemer and a coffee-sausage biscuit combo in myself.

Today was the first day of (unofficial) practice and the bikes were running the bottom section. I was interested in two teams: the Roland Sands Victory Bike ridden by Don Canet from Cycle World and the Ohio State University Buckeye Current team on the electric. Current had just returned from the 2015 IOM TT with a third place finish in the Zero class.

It was the only day this year I’d have to see a practice run. I promised myself I’d take my brother on a tour of Colorado on a vintage bike for his 60th birthday. I forgot to tell him though, so now his 64th would have to do. He put me on a mini bike right in front of him when I was only about six and I was hooked from that day. We bought his first Harley Panhead together back in the 70's. He gave it to me for Christmas only a few years ago and I'm currently in the process of rebuilding it. It was payback time.

He flew into Denver early on Thursday morning and we would leave promptly for a three day tour of some of the best roads in Colorado (perhaps the world) and return to Colorado Springs for the race Sunday morning.

We loaded up the bikes, him on the old R90/6 and me on my late model Triumph Scrambler, and were on the road well before noon. This time, however, we gassed up first. Heading south to Colorado Springs to pick up his media credentials, we battled lunch-hour traffic afterward until reaching Hwy 24 west where we finally broke free. The temperature immediately dropped 10 degrees as we climbed toward Woodland Park. I could already see him smiling in his helmet in my rear view mirror.

Highway 24 is beautiful, but when you crest Wilkerson Pass, angels start singing. Now, I could hear him whooping in his helmet at 70mph. We stopped in the Hartsel Saloon for lunch—it’s the kind of place where you throw the peanut shells on the floor. I held my breath to Buena Vista, as it looked like a storm could be forming on Collegiate Range. There were a few drops, but it looked sunny to the west so we decided to make a go at Cottonwood Pass.

This is a fantastic road, smooth, paved twisties headed up on the east side and dirt twisties on the western descent. The view from 12, 126’ is like you are on top of the world. Snowbanks still lined the road and sides of the parking lot.

Passing the Taylor Reservoir, we followed CO 745 along one of the best fishing rivers on the planet all the way down to highway 135, which connects Gunnison and Crested Butte. Day one, 250 miles and a cabin on the Gunnison River was waiting for us. We played horseshoes and talked to the horses out back. After a good stretch we headed out. A few miles down the road toward Gunnison we found an Italian place called Garlic Mikes. This was one of those places where you might feel guilty eating at if your wife wasn’t with you. We didn’t, but you might. Our wives assumed we would be eating beef jerky and drinking PBR.

We grabbed a six pack of Dogfish Head 90 minute IPA, two Romeo Y Julieta cigars, and prayed the fun police didn’t get wind of what we were getting away with.

The next morning was crystal clear, and the next leg of the trip was from Gunnison to Durango over the million dollar highway. Riding Hwy 50 west to Montrose, we crested several smaller passes before hitting the real ones beginning at Ouray: Red Mountain, Molass and Coal Bank. This road from Ouray to Silverton and Silverton to Durango might just be the finest motorcycling road in America in June. The pavement is perfect, the weather is perfect, the view is stunning, and the trout streams are Gold Medal.

If it’s your first time up, the lack of guardrails and the thousand foot drop-offs may unnerve you a bit—simply because you can’t take your eyes of the scenery and color. Along that 60 miles there are more tempting dirt roads that disappear up into green valleys than one can comprehend. Riding a Triumph Scrambler with dual sport tires, you ache with intrigue to explore any one of them.

Durango is a town of color and character, one of great food and local beer; a hop-head’s paradise. It's a place where people from all over the world are on motorcycles, heading to or returning from the great national parks of the American west.

We had planned to take a quick round-trip to Monument Valley for a picture on that iconic road. It was 96 degrees in Durango, which calculated to about 115 degrees at Mexican Hat. Seven hours of that would definitely have killed the buzz, so instead we headed east to Pagosa Springs. The hot springs there bubble up alongside the icy waters of the San Juan River with people lying all around on the mineral pool rocks. Repeat the previous night, keeping one eye on the lookout for the fun police.

We had all day on Saturday to make the four hour journey back into Colorado Springs, so we took our time—meaning we made it in eight. Wolf Creek Pass overlooking the San Juan valley boasts as many shades of green as a tropical rain forest. The turns are a sequence of long fast sweepers with a passing lane all the way to the summit. To your right on the east, the Great Sand Dunes National Park cap the southern end of the Sangre de Cristo range. To your left, Collegiate Peaks head north for a hundred miles. There is a rock shop outside of Cañon City at the entrance to Royal Gorge that you just can’t pass.

For 60 rolling miles on CO 9 back to Hartsel, we had the two lane road all to ourselves. The descent back down to Colorado Springs was bittersweet. Our journey was nearly over, but we pulled it off. We were still dry and we had history to witness. For three solid days, the bark of the Scrambler’s factory Arrow exhaust, combined with the sound of a German precision mechanical instrument complemented each other quite well and drew the attention of enthusiasts where ever we stopped.

The Pikes Peak International Hill Climb awaited our arrival. It is also known as ’The Race to the Clouds’ and sure enough, they were now forming behind us.

We had a real hotel bed for a few short hours, and I woke up two minutes before my alarm at 2:58 am. The entrance to Pikes Peak Highway had a three mile line of cars waiting. Media passes allowed us to “left lane” it all the way to the gate. A guy on an FZR 400 was on our tail and it turned out to be none other than that same guy who rescued me on I-25 earlier that week!

From the front of the line and a short conversation with the police, we had clean shot up the mountain all the way to the pits (Rideapart, you rock). Though some of the PPIHC Deputy Dog volunteers protested and lectured, we parked our bikes with the motorcycle teams who actually recognize that press is a good thing. Everyone wanted to talk and the excitement continued to grow as the sun appeared.

By the time the green flag dropped at 8:00 am, helicopters were buzzing overhead, the Red Bull truck was booming its techno music, The rockabilly Umbrella Girl had her heels in the dirt, and the smell of ethanol and two-stroke premix was heavy in the air.

And the sound. Oh baby!

In itself, this race alone is a bucket list destination for anyone who loves Americana and motorsports. Precede that by a week with your brother on a pair of motorcycles in the Colorado Rockies?