Somebody Hit Me a Month After Buying My First Motorcycle 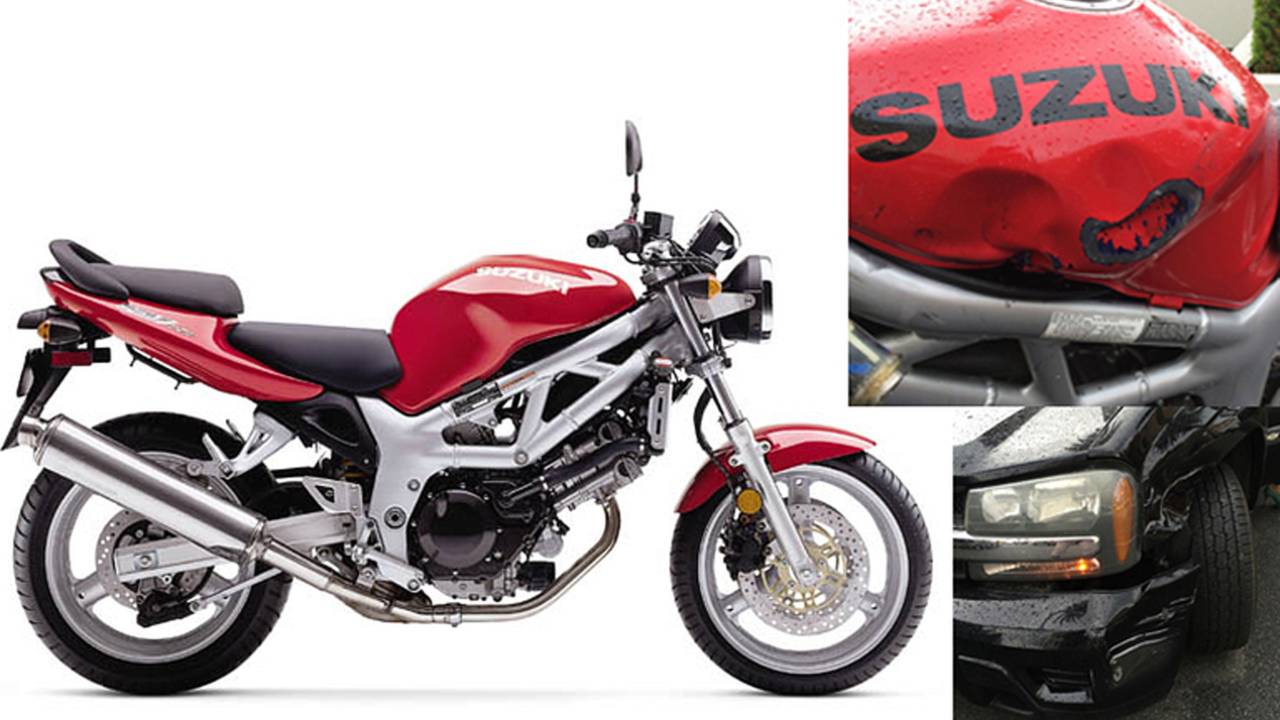 After years of waiting to own my first motorcycle, our time together was cut short.

It only took one month for my friends and family to be able to say to me, "told you so." I sat in the middle of the street in West Hollywood watching as gasoline spewed out of the punctured gas tank. I looked at the bike, lying on its side, as people started to step out of their cars to see if I was okay. All I could feel was anger.

I wasn't concerned with any injuries, I wasn't extremely worried about the state of the motorcycle, and the animosity wasn't even aimed at the person who'd just hit me. I was mad that my two wheels were now out of commission. I was pissed that I became another cliche. Most of all, I was furious that, after years of yearning to own a motorcycle, I only had about two weeks of true riding (I'll explain that later) before everybody close to me now had even more fodder to protest my continued riding.

I first grew an interest in a bike in high school. Unfortunately, my parents weren’t exactly thrilled by the idea. “Not while you’re living under this roof,” they said. So when I got to the University of Missouri for college, I thought, “alright, I’m free, I can do what I want now.” They quickly snapped back with, “as long as we’re paying for your education, you’re not allowed to get a motorcycle.”

This grew particularly frustrating because my dad once owned a bike and my mom had told me stories about how she loved riding on the back. My dad had also witnessed two of his best friends get in life-threatening accidents because of motorcycles. But I had no room to complain. I was fortunate to have parents who were willing to back another dream of mine: becoming a journalist. For that, I'm thankful every single day of my life.

MUST READ:  The Best Motorcycles For New Riders | Ride Apart

After graduating, I moved straight to New York City, a place where owning a vehicle makes about as much sense as giving a homeless a guy a sip of your Dunkin Donuts coffee from the same straw. That leaves my current location in Los Angeles, Calif., where I've lived for just longer than a year.

I got my license back in 2013 and I've been able to test ride quite a few motorcycles. I tried out almost the entire Ducati line, I've ridden five or six different Harley-Davidsons as well as a Kawasaki or two. I'd even tried out a Royal Enfield, the BRP Can-Am Spyder, and the Morgan Three-Wheeler (motorcycle engine!). With that experience, I felt that I'd had enough time to get comfortable with the lower-end power and was ready for a mid-level bike.

After reading multiple reviews, looking at every "best beginner bikes" list I could find, and adjusting the options for a desired budget of about $3,500, I settled on the Suzuki SV650 as my top choice. I loved the naked look, the seating position was a little more upright than a sport-specific motorcycle, they have the Japanese reliability, there are a lot of them out there, I like the way they sound, and I read that they have numerous upgrades for the future. There's also a relatively active group of SV owners in the LA area.

After proudly not jumping on a beautiful 2007 SV650 with ABS I'd seen earlier that week (the price was way too high), I found a red 2001 SV with 17,000 miles listed for $2,200 up in the valley. When I got there to take a look, I was happy to hear and see that the seller was a BMW mechanic. That fact probably lead to me trusting him more than I should have.

I knew immediately that the bike was not in original condition. The paint job was terrible, there was a fender eliminator on the rear, and the crooked gauges were mounted on a few pieces of metal that were clearly added later in its life. But where many people would have immediately walked away, I saw an opportunity. The RSX I had was pretty much perfect. I didn't have any work to do on it, and I wanted something that I could wrench on.

The seller didn't know anything about the previous owners, which is also never good, but I was already hooked. It ran well and it could be my own first project. I wanted a motorcycle, and for that price, I wanted to jump—I got him down to $1,950.

As soon as I started taking the bike apart, I knew I'd made at least somewhat of a mistake. I noticed some places where there were missing screws, I scrolled through the owner's manual I'd ordered, and I thought a little bit harder about why the gauges were mounted like that. I realized it was because there used to be a fairing up front. I had purchased a SV650 S, not the naked SV650 that was advertised.

Here are a few of the issues I dealt with in the following two-week span:

The brakes were a bit low.

The rear tire was done for and the stem valve had dry rotted.

Then the battery died. I also realized that fuel was leaking out of somewhere, so I traced the problem to the fuel cock and replaced that...only to realize the connecting fuel line had a slice in it.

I attended to all of these things and was on my way to getting this bike back into shape. The only thing I'd noticed and hadn't solved yet was a bit of oil around the air filter. I'd also started sanding down some of the pieces to restore it back to its original beautiful blue color. None of that ended up mattering.

There's really not much to tell when it comes to the collision. I was nearing the end of a five-mile trip to NikeTown to buy a U.S. soccer jersey to support my girl, Alex Morgan. Heading down a side street at about 20 mph, a curb-parked Chevy Trailblazer pulled out in front of me at the last second. I hit the driver's side front quarter panel and part of the bumper.

It happened so quickly that I can't say with exact certainty how the bike and my body bounced off, but judging by the "injuries" I sustained (my right shoulder, elbow, and knee were all sore, and part of my left rib cage was tender when I would breathe deeply) and where the bike was damaged, I believe that the motorcycle made a 180 and came down on its left side. I think my momentum carried me forward and I landed on my right side. Salute to the guy who saw what happened from inside his house and came outside to give me a frozen pack of peas.

I was extremely lucky and walked away without any major injuries.

At first glance, taking into consideration how much I'd paid for it, my first estimate was that it was totaled. I was unsure how it would be evaluated because I already had taken so many pieces off it and certain sections were jimmy-rigged from the naked conversion. I also knew a new tank and paint job alone was going to cost a good chunk. Furthermore, one of the pegs had been snapped, the mirrors were busted, the handlebars were scraped up, the frame was scraped, and the clutch cover was cracked.

Despite the bike being valued at much higher than I expected (and more than I paid for it), the tipping point ended up being the frame, which is no longer available. So it was indeed totaled. Silver lining: The payout was great.

And yet, it's still one of the best experiences I've had as a car and motorcycle lover. I've learned a hell of a lot. Working on the bike was one of the most relaxing and mind-clearing things I've ever done, and I'm going to be that much better of a buyer when I do eventually get my next motorcycle. That can't come soon enough.