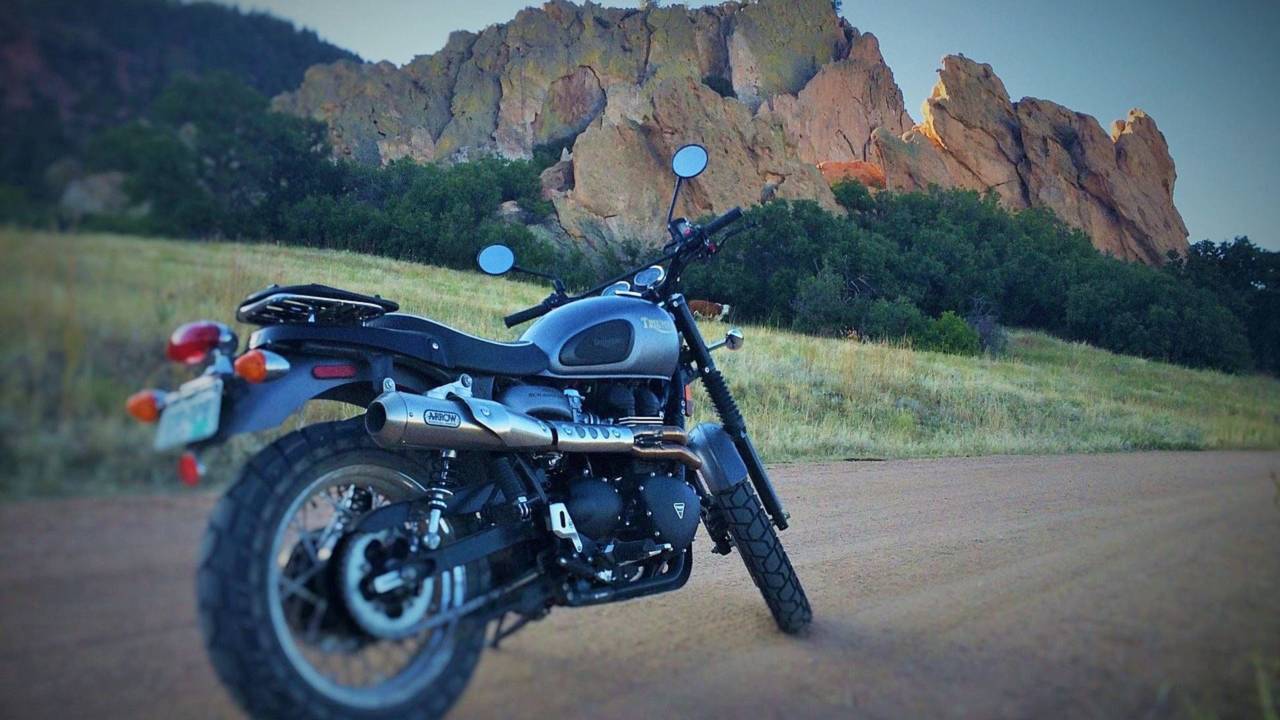 This winter, remember to reflect on sunnier months past to inform those ahead.

Astral travel is best described as an out-of-body experience. It is one that assumes the existence of an astral body--different from the physical one--and that one is capable of traveling outside it. If anyone accepts this to be true, it would be the dedicated motorcyclist in winter.

READ MORE: Why I Ride An Aprilia - A Love Story | RideApart

If you've watched the video Riding September or any of the dozens of similar such compilations, you get where I'm going here. Recalling the images of a past summer's adventure with your buddies, whether in your mind or on your iPhone, can serve as an effective means of forgetting that snot has just frozen your nostrils shut while you are out there shoveling the driveway. This in itself can be an out-of-body experience. It's during these special moments, when you bring the shovel back in and realize the annoying object under the vinyl cover and moving blanket that is preventing you from hanging it back on the proper hook, is your beloved Triumph.

It's hard to imagine, right then and there, that you'll ever get it started again, let alone actually ride it, that you need one of these reflective rides of days long past.

Like that summer day when the sweat was running down into your boots in that Piggly-Wiggly parking lot in Hiawassee, Georgia as the whole group idled patiently, waiting for your moto-brother to get his earphones in and gloves on. You are the one who can't even wait patiently while your wife drops a Redbox movie and yet here you sit without a care in the world on thumping red hot steel and a acre of molten asphalt.

You waited all year for this and here it was. Two hundred miles of the finest twisty mountain roads lay in front of you. Back at the cabin, pasta and cold beer were in your future. The promise of whiskey, cigars and laughter lasting long into the night while you relive the blur of scenery along the Blue Ridge Parkway.

But this also is a time of reflection. For hindsight and learning from your mistakes and experiences are as much a part of the ride as the roads you try to master. The best riders can learn as much at 10mph below the speed limit as they can when the radar gun hits triple digits. The context varies but the content remains constant.

Sure, here in Colorado there are those days when the gods of Indian summer smile on you and you are gifted that perfect late November weekend. Days like these are abbreviated and very special. A buddy has business in town, shows up a day early and brings his gear. Instead of three or five days you have three or five hours. In retrospect, it's not unlike the feelings I have in regards to my marriage or raising children.

On one such recent weekend, we covered canyon twisties, long prairie roads, Lookout Mountain, dirt roads and small, scenic, tree lined towns. We left at 2:30 and we back by 5:00 pm just as the sun was setting and the long, cold fingers of November were reaching for our necks. It was 2 1/2 hours that I'll never forget because I rode it with the same buddy who rode 1271 miles non-stop from Colorado to Oregon with me a few years ago. We did this just so we wouldn't miss the first night together with the rest of the group. When we pulled into Condon, Oregon after midnight there was our ride captain, sitting in the middle of Main Street on a folding chair, waiting for us.

Reflective riding is when you can look back at the ride, whether last week or last year, and think of a particular time, place or condition that reminds you of something you learned or realized about yourself or someone else at that time. Maybe conversations you had after the ride that bonded you as friends or as a group. There is so much more to riding than just the experience of the ride itself. There is no motivational speaker in the world who can do more to change a man for the better than the voice in his head on a ride in the expanse of the west. I have become a better husband, a better father, friend, employee, neighbor, and citizen because of things I have learned and decisions I have made on a motorcycle ride.

I have learned more about how to pack, what to wear, circumstances to avoid and ways to improve during reflective rides than any other time. For example, any time I go to one of those chicken wing joints I always grab a pocket full of those hand wipe packets. It was that mosquito swarm we hit after coming down the mountain along the Colombia Gorge. They were so thick it was impossible to continue riding but would have been suicide to stop. We had to wipe with our gloves and press on to the next exit where we were forced to use hot, rancid truck stop windshield cleaner. It smelled so bad we couldn't stand it. This summer, I threw a few packets to my buddies after one such section of road. I was like Santa Claus, Mary Poppins and a genie in a bottle all in one...

I have learned how to give and take instruction. What to look for in a riding partner, what he can teach me, and I him. I have learned to feel when a driver is going to change lanes without signal. To forget these things during the winter months is like forgetting what bank you put your money in. Reflective riding can save your life and your soul.

Outside, the wind howls and the snow blows but a small green light in the garage flashes. A beacon of hope. Who knew that a battery tender could serve such a noble and powerful purpose?