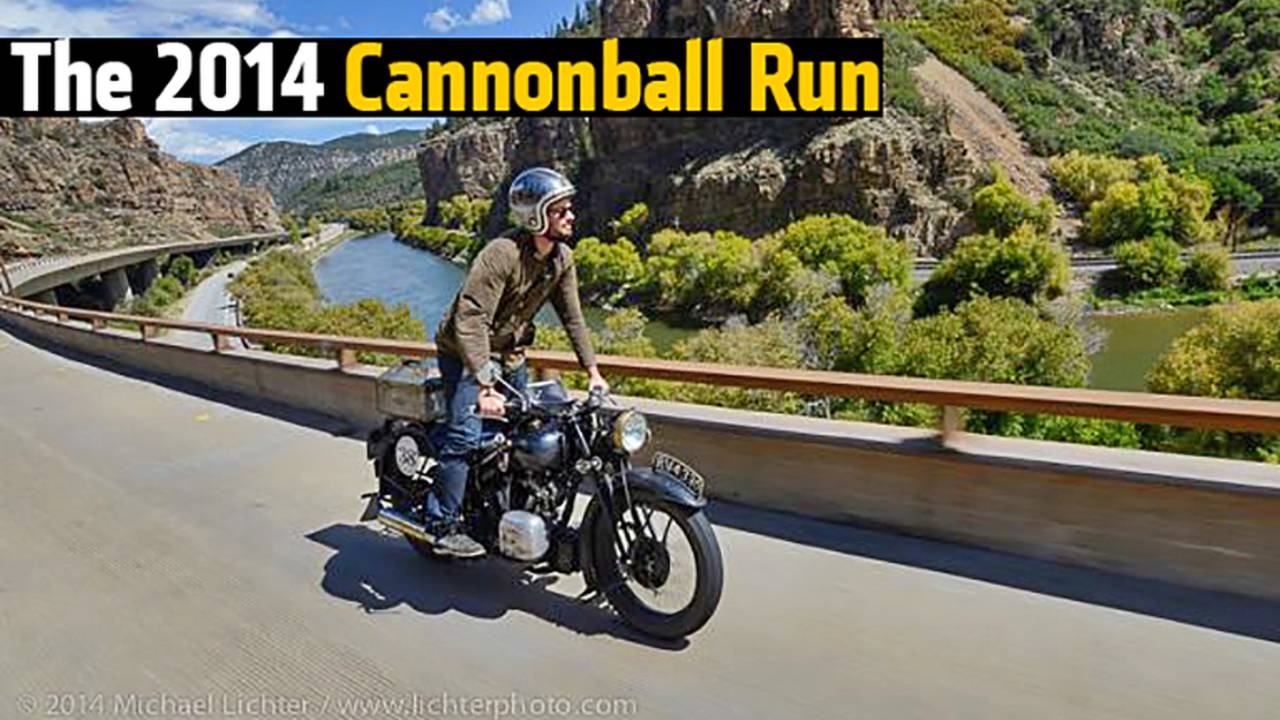 We expelling the history and check out the 2014 Cannonball Run, Coast to Coast Motorcycle Endurance Run.

No, we’re not talking about Brock Yates (One Lap of America), this isn’t the Gumball Rally and it’s DEFINITELY not the Burt Reynolds movie version. This is the real deal, the rally that spawned all of the others. It’s a two-week, 4,000 mile trip taken on 100-year old motorcycles - the Cannonball Run.

The 2014 Coast to Coast Cannonball Motorcycle Endurance Run was held from September 5th until September 21st and featured over 40 competitors riding only pre-1938 motorcycles.

How it Started: Cannonball Run

In 1903, George A. Wyman was recorded as being the first man to travel coast-to-coast on a motor vehicle, beating out a car by 20 days. Wyman did it in 38 days (one report says 51 days) on a California, a single-cylinder motorcycle – although calling Wyman’s machine a “motorcycle” is a bit generous. More like riding a bicycle with an engine strapped to the down-tube, Wyman’s trek was a brutal exercise in determination and strength. Taking a motorcycle with no suspension from San Francisco to New York, in 38 days, before there were highways or even many paved roads…think about that next time you’re sitting on the tarmac complaining about your delayed flight (or just listen to Louis CK).

The name “Cannonball” comes from Erwin George “Cannonball” Baker, a famed motorcycle and car racer. Apparently it was a great marketing idea to race point-to-point to promote cars and bikes and like Ab Jenkins (famous Bonneville record setter), Baker began a career racing motorcycles across the US... literally. Baker wasn’t visiting race tracks or various local circuits (that was his side job along with being one of the first men to run NASCAR); he was doing long-haul, coast-to-coast trips. Lots of them. Baker is said to have made cross-country trips 143 times over the course of his life. His nickname was used in the race still held today. Brock Yates, former Car and Driver editor and creator of the Cannonball Baker Sea-To-Shining-Sea Memorial Trophy Dash, named his event after Baker.

In 1910, more people wanted a part of the punishment, and so the Coast-to-Coast Cannonball Motorcycle Endurance Run was born. The event has been frozen in time, as entries must complete the run on motorcycles built no later than 1938.

Any pre-1938 bike will do, and the rally has seen just about every brand that was around back then. This year was one of the best with every type of bike you can imagine, including Vincents, Harley-Davidsons, Indians, Excelsiors, and more - some custom and some original.

One of my favorite bikes was this 1936 Harley-Davidson Knucklehead hardtail chopper. A Born Free show winner, it’s not the best bike to ride across the country, but doing so carries serious bragging rights.

This year’s route started on the beach in Daytona Beach, Florida, and finished in Washington. It featured the least amount of highway riding possible, with an average of 300 miles a day. The event scheduled eight hours of riding a day with one rest day in the middle of the 17-day trip. This is one of the coolest road trips in the country.

Shinya Kimura, famed motorcycle builder and owner of Chabott Engineering competed in the rally on a 99-year-old Indian, occasionally doing open-heart surgery to the motorcycle in the hotel parking lots. Despite his occasional maintenance and repairs, he did in fact finish.

A personal hero of the author, Michael Lichter is to photography as David Mann is to paintings. He has shot some of the most famous custom motorcycles ever and has been photographing the Cannonball Run for some years now. Visit his site and Facebook page to see some of the coolest motorcycle photography around.

The morning this post was written a group of A-holes stole a couple trucks loaded down with various motorcycles and support equipment for the rally. The following was reported stolen as according to http://www.motorcyclecannonball.com:

If you have any info visit www.motorcyclecannonball.com to see how you can help.