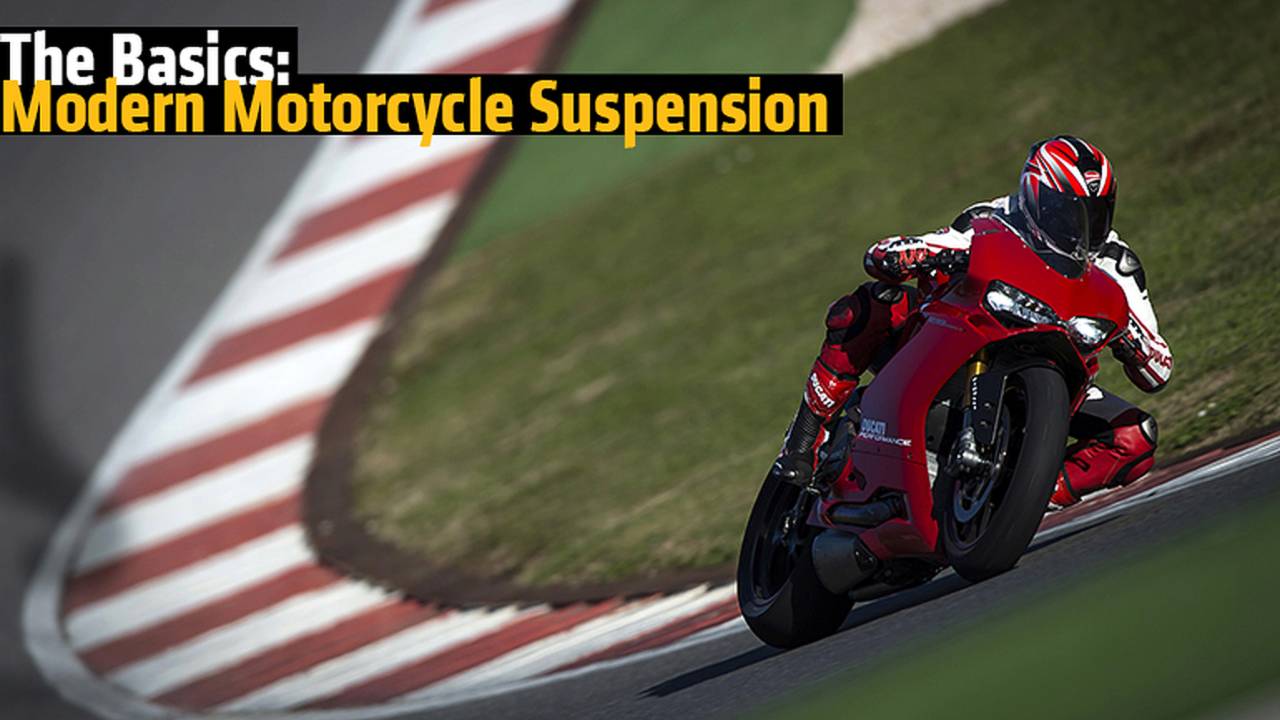 A basic explanation of modern motorcycle suspension and how it came to be.

In it's simplest design, suspension was not invented (on motorcycles or cars) for the sheer purpose of comfort, but more for safety and going fast. A mutual problem between all the big-named competitors—that is always improved, but never fully solved—is keeping the rubber on the road. A well functioning suspension should absorb the shock of paved imperfections while increasing cornering, braking and acceleration thresholds, but how did it modern suspension evolve into what we're riding today? We take a look at motorcycle suspension, explaining the basics and its evolution.

Suspension is the component that allows the wheels to move up and over its impeding obstacle, and it also strives to eliminate traction loss and the transfer of kinetic energy past itself. During the developmental years of the motorcycle, fabricators experimented with multiple ways to accomplish this. Mirroring the evolutionary sequence, the process of elimination has narrowed the average setup to forks for the front wheel and a swingarm for the rear wheel.

Because the front wheel is the steering control of a motorcycle, nearly every motorcycle today has a pair of telescopic forks. Forks are basically large shock absorbers with an internal spring and hydraulic damper. They are held in place by a set of triple trees that turn at the steering neck. (For the sake of this discussion, we are excluding some of the rare designs like the Earles fork or Telelever fork that uses a swingarm in the front as well as in the rear.)

What Wins on Sunday, Sells on Monday

The first official season of MotoGP in 1949 introduced many different types of front suspension into competition. The winner of the premier 500cc class, Leslie Graham rode a telescoping fork-equipped AJS. Most two wheeled races placed fork-wielding machines past the finish line first, and it didn’t take long for the competitors to catch on. Through the next few championships, most racing teams chose to iron out the creases of telescoping forks rather than doing so with other inferior alternatives.

Spring preload—or the amount of force applied by the internal spring before compression—was set by installing a spacer at one end of the spring. When the fork compresses, a check valve allows the fork oil to travel through a small hole called the “compression orifice." Decompression of the forks is controlled by the rebound damping orifice, which regulates the speed the forks will return.

Because the internals of telescoping forks were altered to meet the demands of differing track and bike combinations, the need for an easier universal fitment arose—enter the invention of adjustable suspension. Threads were tapped onto the spring preload spacer, and damping orifices could be throttled with valves. The best part is that these adjustments could be made without the arduous task of disassembling the forks.

While these are both cut-aways of brand new motorcycles, the best performing suspension typically uses inverted forks (pictured right).

Around the same time that big hair was being cut down and frosted tips became popular, the genius engineers of suspension found that inverting a motorcycle's forks proved to be far more beneficial than the standard way of mounting. With upside-down (USD) forks, the outer tube was now affixed to the triple trees, and the lighter inner tube moved with the wheel. This made for a more rapid shock absorption, while improving the rigidity of the whole assembly

Although rear suspension has a variety of arrangements today, early variations were far less numerous. There were two common rear set-ups: A rigid mounting of the rear wheel with suspension under the seat, and a swingarm with twin mounted shock absorbers. To this day, many bikes are still made with either arrangement but are far from practical in the world of competitive racing.

In 1973, Yamaha leaned away from commonality and introduced the monoshock swingarm to the dirt racing world. Radical in its time, the idea of a monoshock provided numerous advantages, and would soon completely replace the twin shock design in all racing classes with the exception of nostalgia.

Due to the tolerances of machining, it's impossible to sync two shocks perfectly, no matter how skilled the tuner is. However, dropping one shock absorber solved that problem. The monoshock setup also opened the door to linkage, which uses a system of fulcrums and levers to redirect and transform the force applied to the shock absorber.

Linked suspension is a simple idea. I’m certain you've had a eureka moment while you played on the teeter totter with your dad and the same physics apply to linkage. As the swingarm raises, it pulls and rotates another lever, which compresses the shock absorber that is attached to either the frame or the swingarm itself (as can be seen on Honda’s Pro Link suspension).

So here we are: USD forks in the front and linked suspension for the rear, optimized to handle the challenges of unique racetracks. Precise tuning that was once done by a skilled professional—to allow faster entering speeds, more power when leaving the turn, and earlier throttle roll-on through the apex—is now being handled by a computer, in real time. Top brands like Ohlins and Marzoochi are using potentiometers, accelerometers, and electronic control units to actively change the damping adjusters. Our need to go faster has directed the progression of motorcycle technology, and as long as competition remains alive, we will never stop putting new variables into the ever-expanding equation of speed.