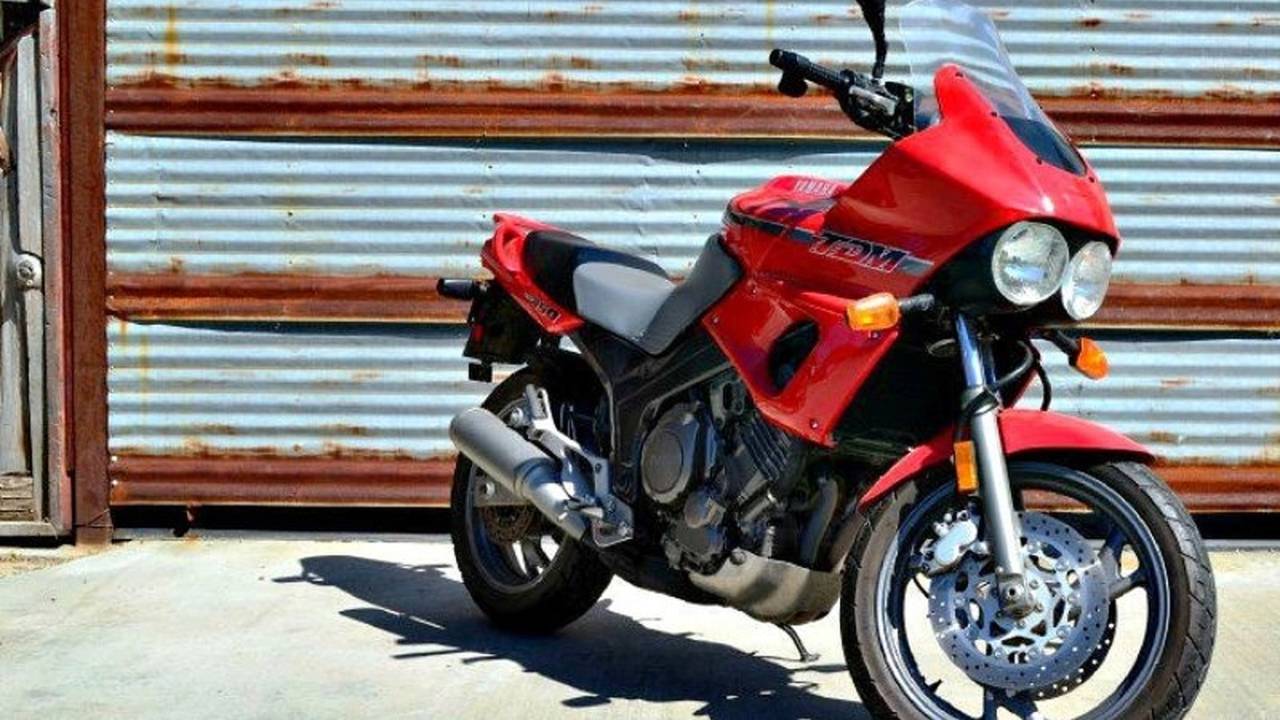 The Yamaha TDM850 Proto-Adventure Bike: a cult-spawning history, and a rare find at this mileage and price point.

A few weeks ago I showed you the Honda GB500 before its time cafe racer, and this week we have the Yamaha adventure tourer that came too early.

Back in the late 1980s, when the Paris-Dakar rally still ran from Paris, France to Dakar, Senegal, big off-road bikes like the BMW GS series dominated. We didn't get much coverage of the event in the USA, but in Europe and the rest of the world this was a big deal. Yamaha had won the first 2 events in 1979 and 1980 with one of their XT500 air cooled big bore dual sport bikes, but no single could compete with the superior top speed the twins had when blasting across the wide open desert stages.

BMW had won 4 times from 1981-1985 and the R100GS had enjoyed huge sales successes because of it. Honda took notice and introduced the NXR750V, based oddly enough on the V-twin motor used in the Honda Shadow cruiser, and proceeded to win the next 4 events.

The success of these bikes and the win on Sunday, sell on Monday philosophy also led to the Cagiva Elephant (with Ducati power) and the Suzuki DR Big. So in 1989 Yamaha introduced their own player, the XTZ750 Super Ténéré. It took a few years of development, but then managed to win all but one event from 1991 until twins were outlawed.

The US market never got those bikes from Yamaha (though we did get the BMW GS, and the Honda Transalp XL600V from 1989-91), but in 1992 they decided to test the waters with a new and more street focused version: the TDM850. Featuring a nice open cockpit, upright riding position, usable torque everywhere, decent handling, and goofy looks, the TDM really is similar to the adventure bike everyone knows and loves these days. At the time however, the goofy looks, and dirt bike-that-isn't-very-good-in-the-dirt nature just confused American buyers. Honda suffered the same fate with the American Transalp.

But much like the Honda GB500 and Kawasaki W650, sales failure translates into cult classic status a few years down the line. People who did buy the TDM850 in the 90s loved them and you rarely see any for sale. When they do come up they typically have plenty of miles on them because it makes such a great all-around bike. You can do back road canyon riding on the weekends, commute to work all week, and tour the countryside when your 2 weeks of vacation time roll around, without needing a 2nd bike.

This current find, in Wylie, Texas, has just 12k miles on the clock, and looks practically new in most respects. The buy-it-now price of just $2,500 has me temped to grab a plane ticket to Dallas and just ride it back to L.A. over a long weekend.

Here is what the seller, a used car dealer, has to say about it:

Offered for sale is this 1992 Yamaha TDM 850, Yamaha's Sport Touring Bike which MOTORCYCLIST Magazine claims was capable just about anywhere except a supercross track.

Just arrived here at our facility, this locally-owned TDM has been brought to us in excellent condition! With just under 12,000 Miles. This bike rides and performs as good as new!

Cosmetically, the paint is in excellent condition with no fading, scraping or evidence of ever being laid-down by a careless owner."

There are plenty of pictures on the eBay auction, and you can see them all by clicking here. They are also accepting best offers, so maybe you could get this oddball utility infielder for less?