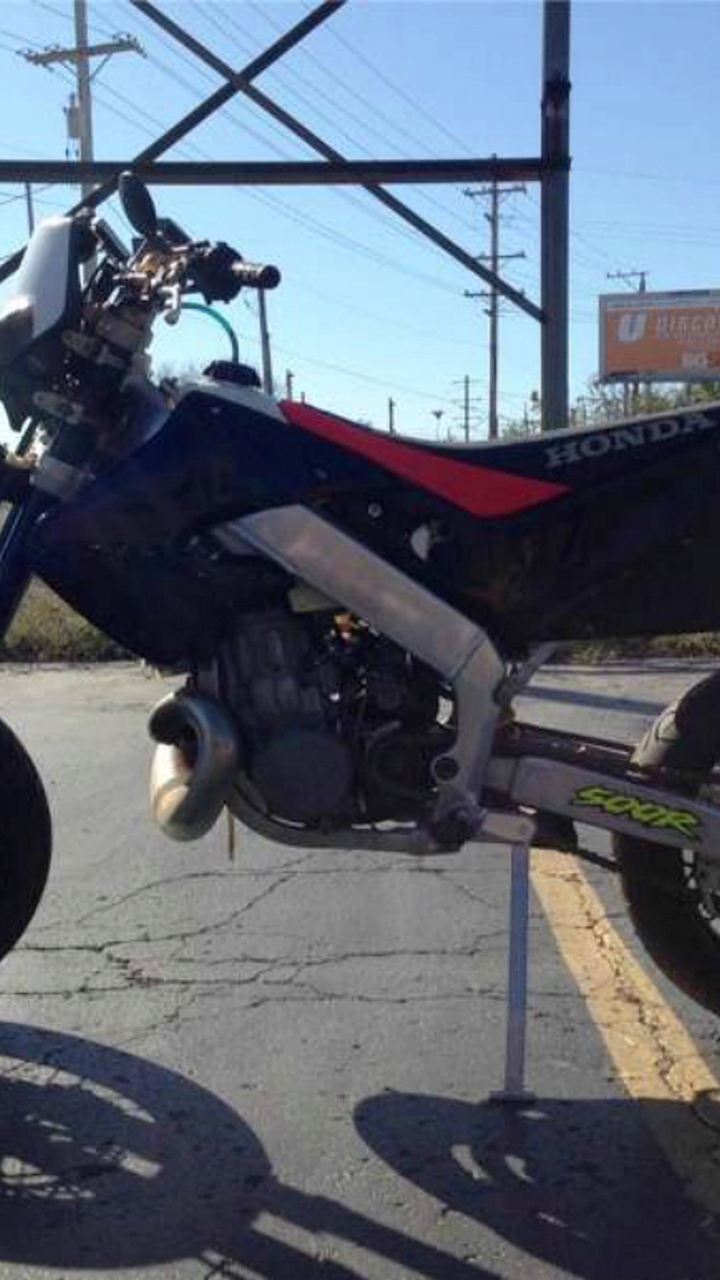 A 1999 Honda CR250 frame, stuffed with a similar vintage CR500 motor, outfitted for SuperMoto, and somehow given the blessing of the DMV for street usage.

This week's find is a modern version of the Wide World of Sports Superbikers race bike, only street legal.

READ MORE: What Are the Differences Between Dual Sports, Enduros, Supermotos, and Adventure Bikes? | RideApart

Some people dream of street legal MotoGP bikes, others dream of a barely tamed old 500 two-stroke Grand Prix bike or World Superbike, but those aren't for me. For one thing, they're horribly uncomfortable to ride, and for another the motors wouldn't be good for city traffic. I dream of a street legal version of the bikes from ABC's Wide World of Sports "Superbikers" series, the dawn of what would become SuperMoto or Super Motard.

This week I have found a bike that's even better than anything the pros had in 1985 when ABC pulled the plug on the series: A 1999 Honda CR250 frame, stuffed with a similar vintage CR500 motor, outfitted for SuperMoto, and somehow given the blessing of the DMV for street usage.

To understand why this is so cool you have to understand a few things about the history of dirt bikes. In 1997, the revolutionary Honda CR250 with the aluminum perimeter frame was introduced and weighed about 220lbs. The CR500 had hardly changed in the past 10 years because open class bikes were too powerful and the AMA pro classes had stopped racing them. Whatever corner of the enthusiast community you're in, this hybrid has a similar equivalent (V-tec motor in 1980s Civic hatchback, 5.0 motor in 1960s Mustang, Chevy LS motor in a Miata, etc.). What you end up with is about 60hp in a 250lb bike with torque everywhere that's as maneuverable as a bicycle in tight urban areas.

If you're of an age to have watched this on TV as a kid, you'd still be dreaming about one too.

The ABC show/race brought together road racers, motocross riders, and oval flat track stars to a wide open course with both dirt and paved sections. It being a TV show, it paid relatively well, so many big names were there to compete from each discipline. But even the factory riders could only dream about a bike like our Panjo find here. This is what state of the art looked like in the 1980s.

From the few pictures and description, it seems like this is a well constructed machine, not a cheap botch job. You get a real Acewell speedo/tach instead of a $20 bicycle computer, a fat alloy bar, and some other quality name brand pieces.

Where You Can Find It

The bike currently lives in the Chicago, IL area and I personally wouldn't try to sneak it past the DMV paper pushers in another state. I'm almost certain California wouldn't go for it no matter how much you begged. Here's what the seller has to say:

"Selling my plated 1999 CR 500 swapped 250. Recent fork seals, carb clean and chain. New reed block. Has all the items for street use. Excel wheels ... Starts good, but not for my old hips, I'll stick to a button. Located in the burbs of Chicago ...Its a power house and a handful."

He's only asking $4,000, and you most likely can't find the two bikes and build one like it yourself for less than that—even before making it street legal. You can find it here on Panjo.