Thinking about taking a ride through Oregon's backcountry? Here's one rider's account of a great trip on the Oregon Backcountry Discovery Route.

Nov 17, 2014 at 8:00pm ET
By: Zach Bainter
This past summer, some friends and I rode the Oregon Backcountry Discovery Route.  We followed Route 5 from Lakeview, Oregon to Walla Walla, Washington.  It’s a circuitous, 900 mile off-road trail mapped in 2000, and it weaves in and out through all kinds of amazing terrain.
We departed on July 5th; it was hot and dry.  In retrospect, the weather was pretty amazing - but I have a tendency to overheat if we sit idle for too long, so at times the heat tested me more than the rocks and sand.  There wasn’t any snow and only about an hour of rain, just enough to make for a fun change of pace.  Since Oregon is known for rain, I brought a tent fly.  It mostly came in handy to help snub out the sound of my snoring neighbors, but that was reason enough to bring it again regardless of the forecast. 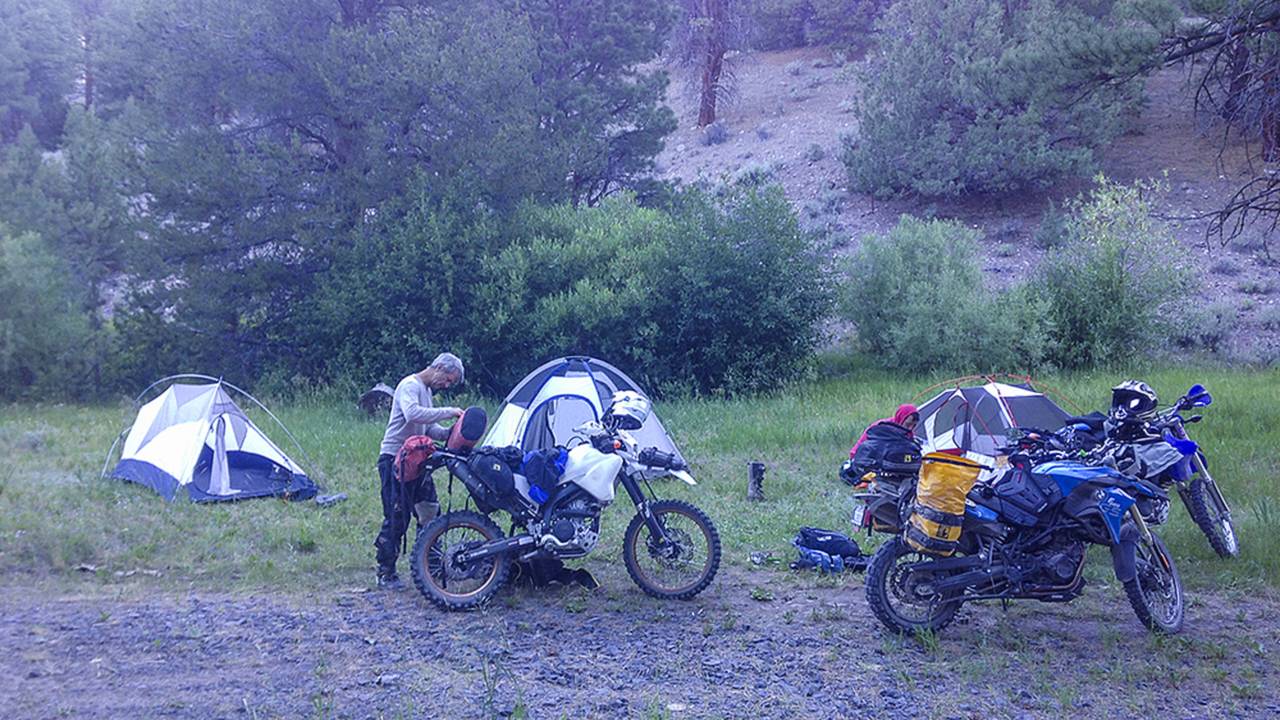 One of the riders was a new rider, one was an experienced off roader and then there was me.  I grew up trail riding, but never went fully off the grid, so I was looking forward to the new challenges.  The first challenge was my friend’s bike; it was a new F800GS that was too much for him to comfortably handle so I gladly “helped” him out by riding it for him (it’s still new, just with a couple scratches here and there that I like to call story reminders).

With knobbies strapped to the luggage, I rode my friend’s F800GS from Los Angeles and met them in Lakeview.  They rode down from Portland on Yamaha WR250Rs.  After the rendezvous, we swapped the road tires for knobbies and hit the trail.  We rode day after day through rocks, deserts, deep forests, dry lakes, and a couple of river crossings.  We rode from sun-up to sundown, facing a different element every day, with barely any light left as we pitched our tents for the night. We mostly camped under the stars next to a creek or lake but sometimes we had to get a shady motel room and splurge on a shower. We brought portable wipes but those just don't cut it after three days. 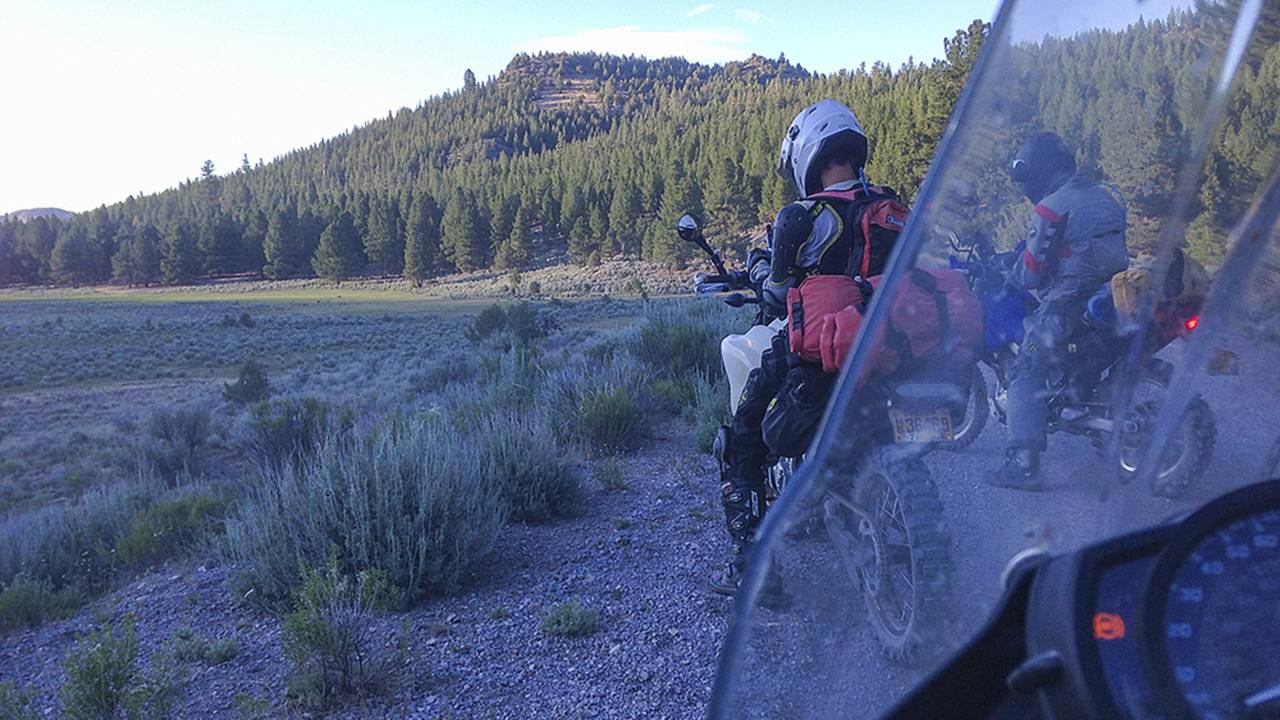 The trails presented a little bit of danger. If you’re taking the trip north, beware of the rocks. Once you think you’re past the toughest rocks, you always soon realize that you haven’t seen anything yet.  Each of us put our bikes down a time or three.  Occasionally we felt like giving up, but being 50 miles from anywhere ruled out the option of walking out and we pushed on.  It was stressful at the time but the rewards and freedom made it an adventure that I’d do over and over again.

We ended up cutting the trip short by 150 miles and didn’t make as many stops as we planned, but the ones we did make were spectacular. Seeing so much wilderness and herds of wild elk really brought me back to earth. Overpopulation is no longer my greatest worry, it’s now clearly lack of water. 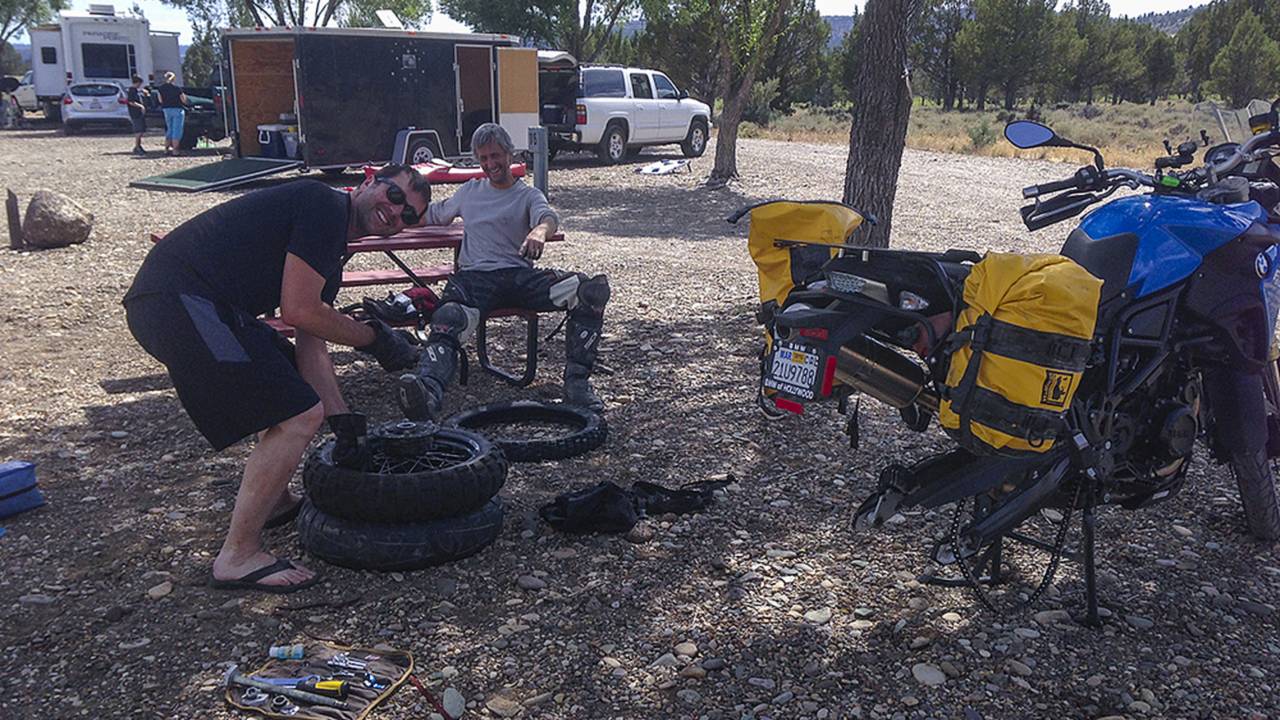 To give you a little idea of the packing, we basically had just essentials. We planned meals for 7days of back country which could only be cooked with boiling water. One of us had a JetBoil and that was it. A few MREs, some ramen, and a couple cans of soup that I never ate and totally regretted bringing because they were so heavy. Breakfast was instant oatmeal and dried berries. Lunch was anything we could snack on quickly, like fruit bars, granola bars, and packaged tuna. We also ate a ton of beef jerky.

READ MORE: How To Motorcycle Camp

Our riding gear was light. I went with KLM pants, some old motocross boots, a chest and shoulder protector, elbow pads, gloves, and a dirt bike helmet with goggles. I kept a light shirt under it all, long sleeves to protect from the sun. A couple pairs of clothes aside from just riding gear was nice, as well as some sandals or old shoes that could be packed tight. Lots of socks and underwear were very important.

The sun was definitely my enemy. I had to constantly apply sunblock and Chapstick throughout the day.  My boots were my second enemy; the soles were literally coming off at the heels and I had to duct-tape them at every stop. 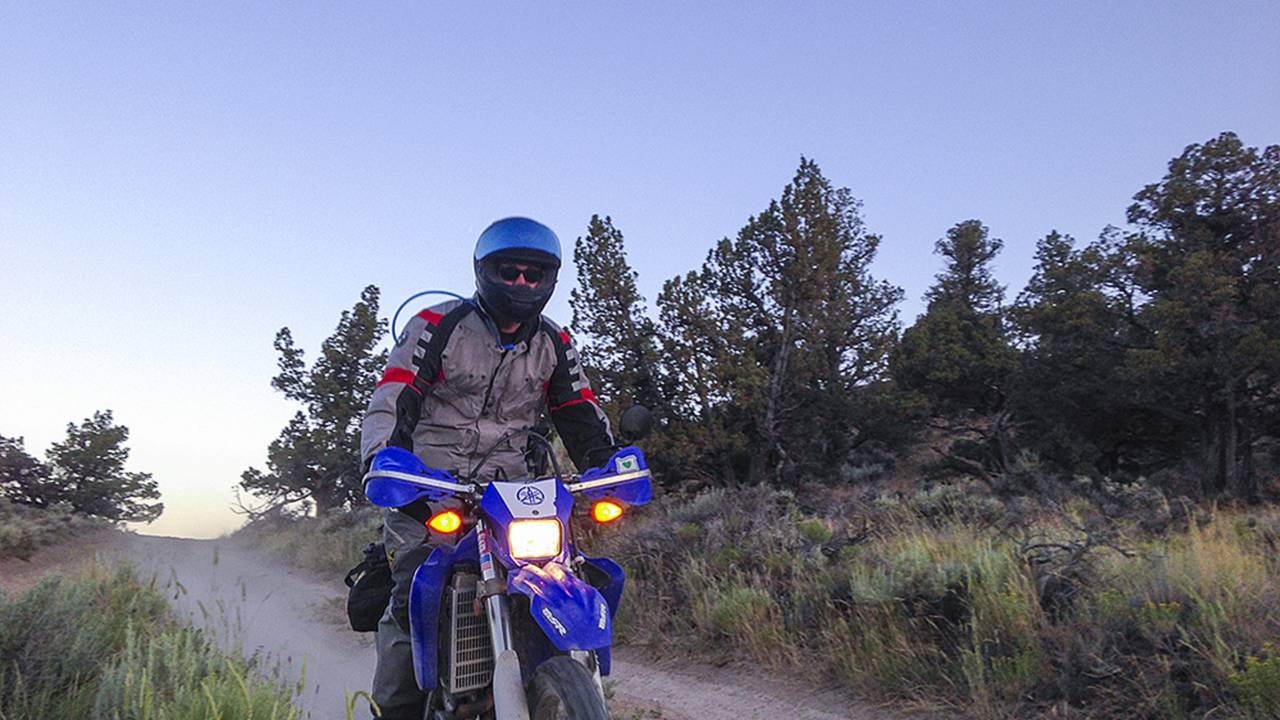 Most importantly of all, we carried lots of water. We each wore a 100oz Camelbak plus a spare 100oz strapped to our luggage and never passed up an opportunity to top off with clean water.  On the third day we decided to put ice in the bags too.  It keeps you cool and slowly melts while you drink.  We put electrolyte pills in the ones we wore because you sweat all day and have to replenish the salt and potassium. Wearing a Camelbak while riding is crucial, especially when you don’t know when your riding buddies are going to stop again.  Sometimes it’s a long run without stopping, provided we are finding and staying on the trail.  If we veered off by mistake, there was far too much stopping to find the trail.

Which brings me to the next point: GPS.  This trail could not have been found without one.  Some spots were overgrown and near missing, some were closed off only to find them open on the other side of the berm.  I was able to try out my new favorite app MotionX. It was amazing; we downloaded the trail and it highlighted the map with a red line to follow.  Although the maps would come and go based on cell connection, or pre-downloading map cells, the red line was always constant.  Just follow the red line and smile. 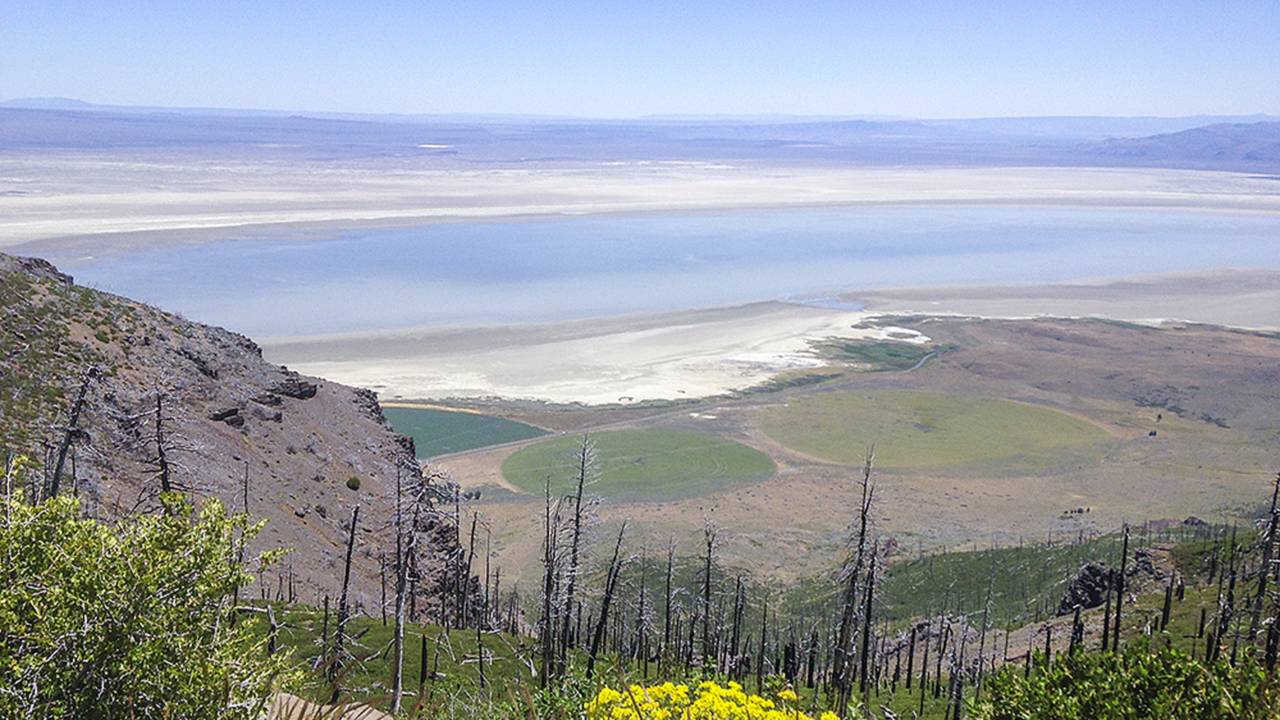 Aside from the essentials, I brought a fishing pole. It was a nice break to go catch a fish and not ride all day every day. Sometimes a mental break was welcome.

We brought a variety of tools and changed quite a few flat tires along the trail. My friend’s bike had a problem with the sprocket, the spindle was coming out of the engine and he was losing all of his gears.  Unfortunately, we didn’t bring a breaker bar and socket needed to get the nut off, so we left our friend behind and rode into the hardware store.  In the end, we couldn’t get the nut to break free, but we got it on tight enough to shift gears.  So we marched on.  It turns out these breakdowns are a regular thing, we experienced them daily. 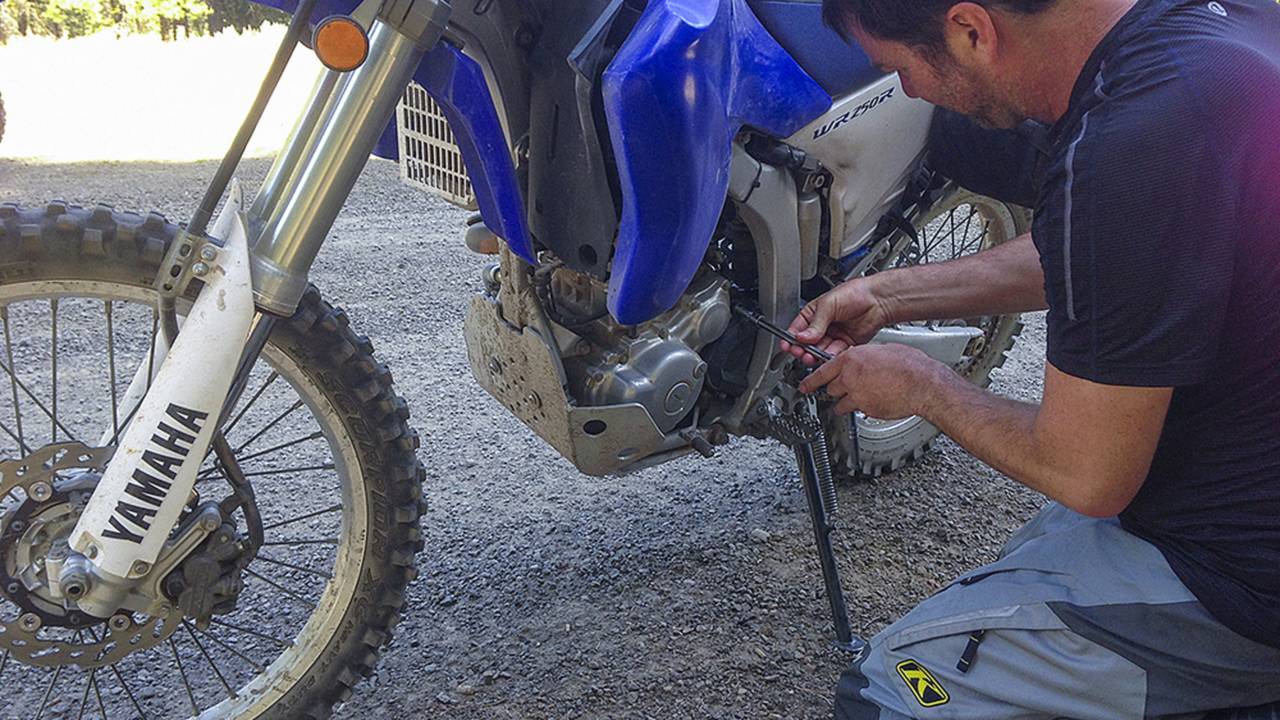 On day 7 we had to leave to get back to work. We postponed the rest of our trip for later in the summer, which we attempted, but failed as my other friend’s bike lost it’s main bearing about 150 miles back to Sumpter.

About the bikes: the F800GS has a killer suspension, but it is a tank and incredibly heavy. The WR250Rs, though gutless, were amazing. Their light weight and capabilities took them anywhere. You just can’t ride one without playing around on it.

READ MORE: Around The World on a BMW 650GS

We are now planning to ride the AZ back country trail next.  I just picked up a bike I feel will be somewhere in between the F800GS and WR250r, a Husqvarna TE 450. I like the F800’s power but preferred the agility of the smaller dirt bikes. Perhaps this one will be the perfect blend of the two. Though I would do the ride all over again with any of them. 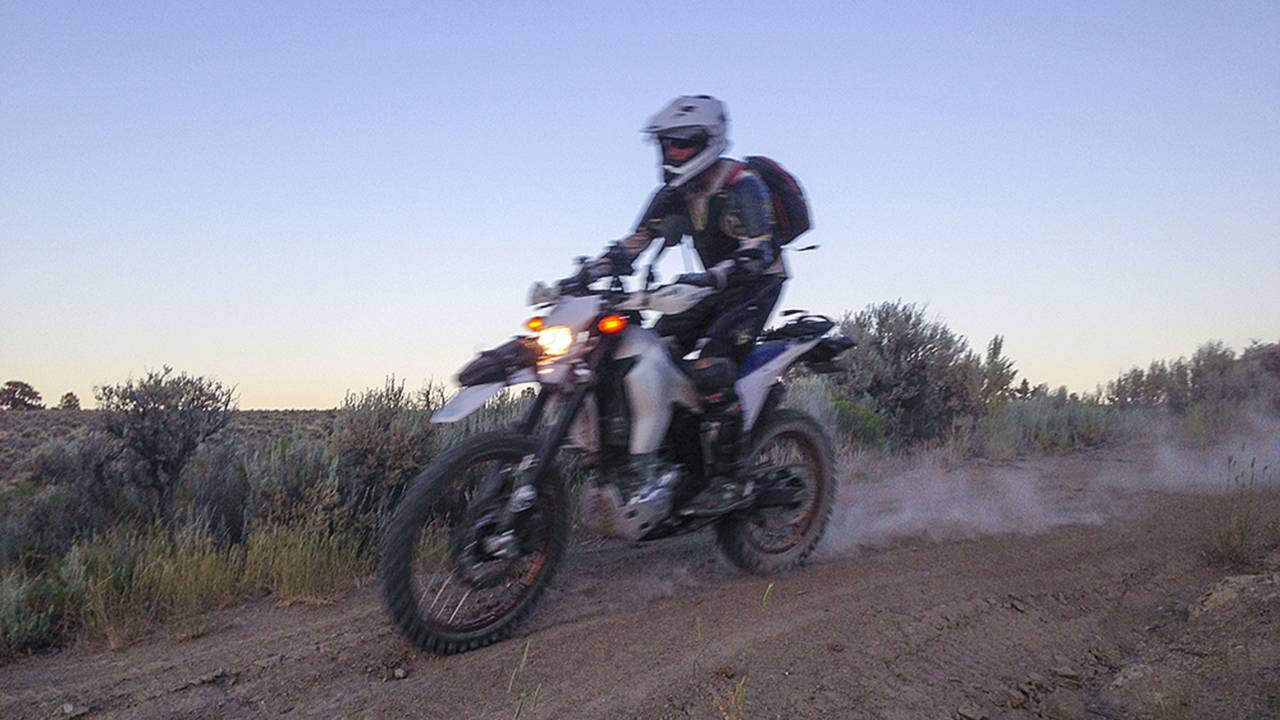 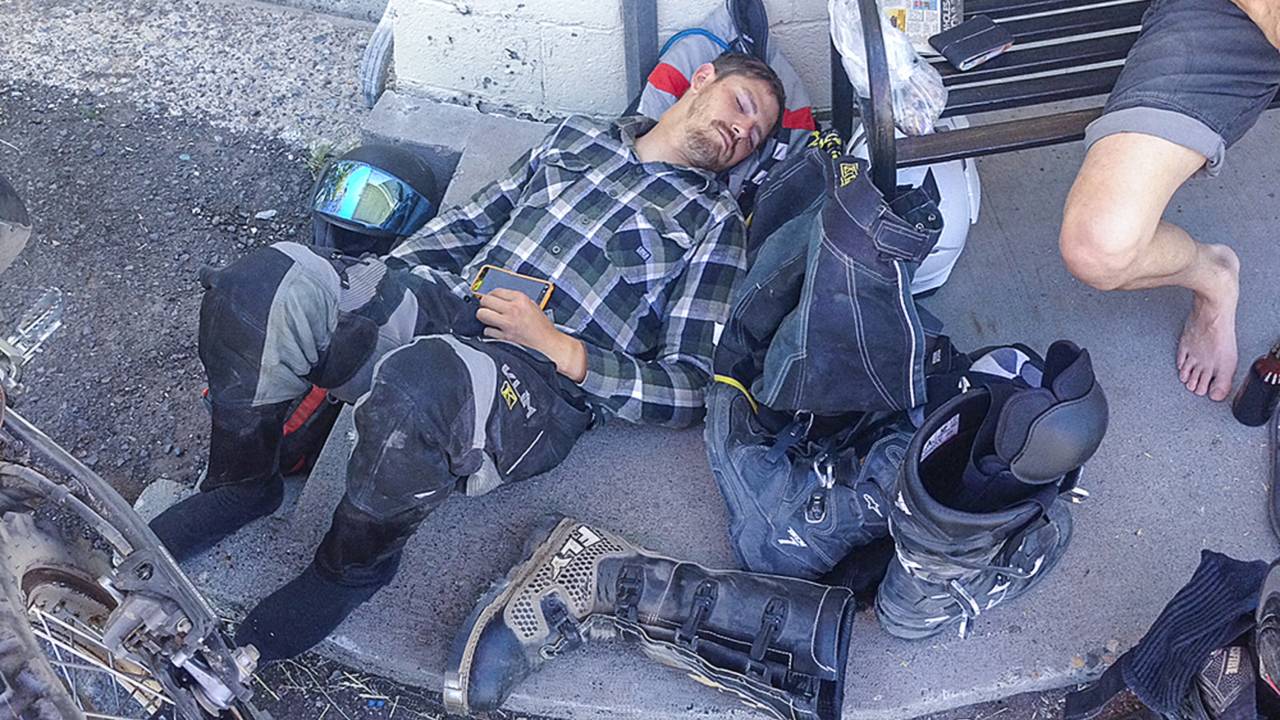 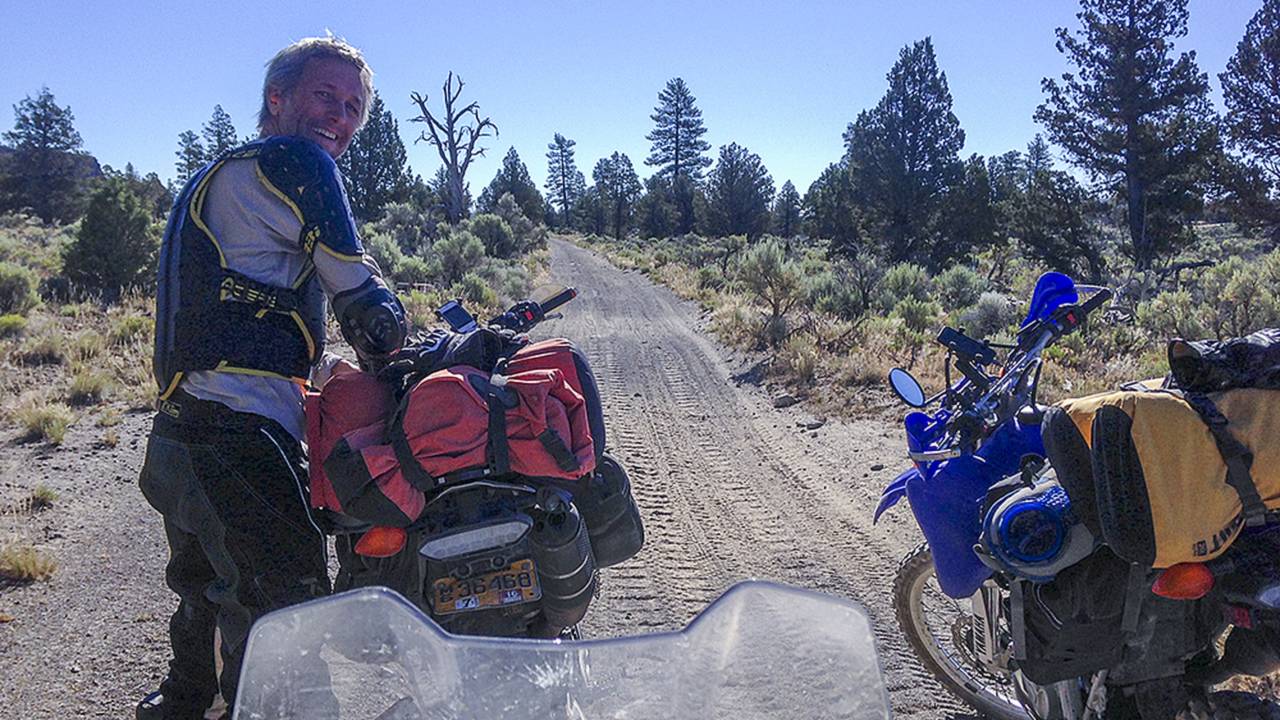 By: Zach Bainter
++
Got a tip for us? Email: tips@rideapart.com